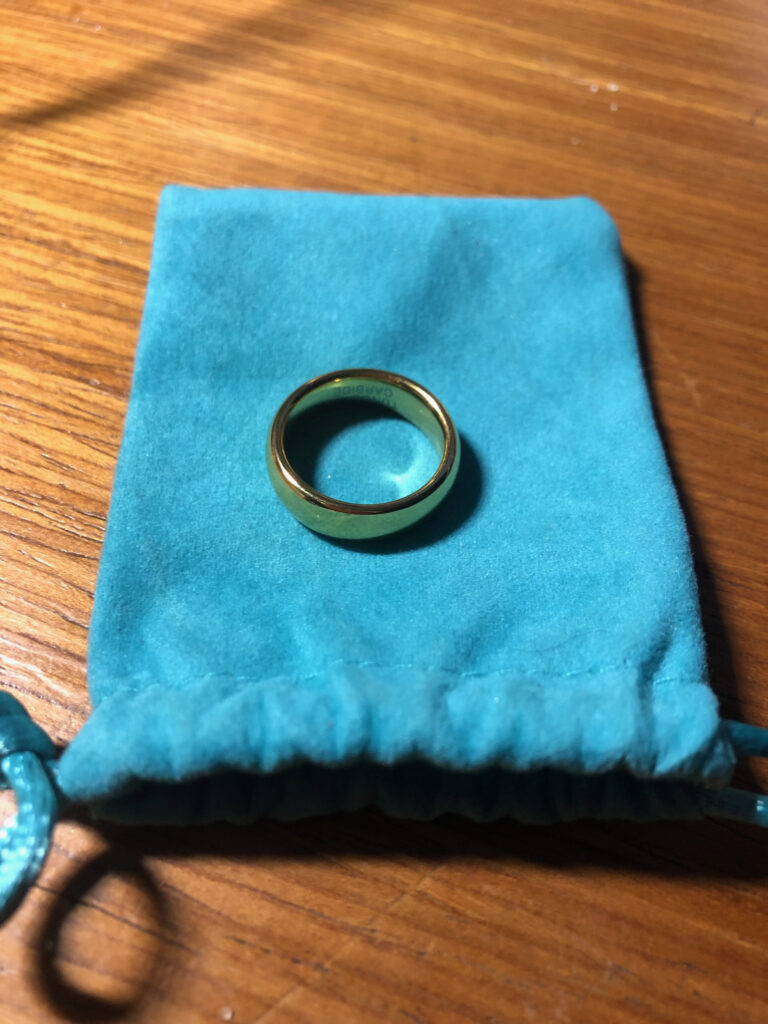 “Did you send me this ring, Bernie?”

“Of course I sent it to you, Eve. Who else would send you a wedding ring?”

“It was so strange. Mikko Ijas, who heads Zen Peacemakers in Finland, was ordaining and asked me for a small fabric piece to sew onto his ordination robe. I sent it, accompanied by a card, and he never got it. I even inquired at the post office and they couldn’t track it down. Some 9 months later, well after Mikko’s ordination, the envelope came back all strangely taped up. I opened it. There was the fabric with the card, and there was also a titanium gold wedding ring in a velvet bag. Someone must have opened my envelope to Mikko, discovered the fabric and card, put in the ring in the velvet bag, taped up the envelope and sent it back to me. Was it you?”

“But at this point, with you being dead and me still living, why?”

“You think our marriage ended just because I died? Besides, I wanted to send you a real wedding ring. Our marriage in our Santa Barbara home was very low-key. We had two couples as witnesses, one of whom also served as the officiant, Hawaiian flowers sent us by June Tanoue and Joshin Althouse, 2 tulip champagne glasses from our neighbors, and lunch next door. Before that we’d gone shopping on Main Street and found a stainless-steel ring that comprised three circular rings. We bought one for you and one for me, for a total of $50, for our wedding rings. I thought it was time you got something nicer.”

“There’s so much irony here, Bernie. Mikko was ordaining, which in old days meant he was becoming a monk, only Mikko is a family man. For many years there was this odd tension between ordination and family responsibilities. So, I sent him something to support his ordination, and you sent back a wedding ring. Is there a teaching there?”

“Actually, you’re teaching more now than ever before.”

“You know, Eve, in the beginning the only thing that mattered to me was spreading the dharma, reaching as many people as possible and helping them realize the interdependence of life. In the process of doing that I found I’d left my own family behind, my own wife and children.”

“Do you remember one of our trips to Israel, Bernie? You had a son with his own children in Jerusalem. I watched you pack a few items in a small carry-on and asked you: ‘So are you packing like a monk or like a grandfather?’ And you went out to a toy store and got toys for your grandchildren, which meant that you had to empty the small carry-on and pack everything again in a bigger valise.”

“In that spirit I sent you another wedding ring.”

“Who’re you talking to?”

“Yes, he’s dead. I was there, which you probably forgot because you ignored me completely at that time. I was lucky to get food.”

“You know, Aussie, in the Lotus Sutra the Buddha says that he’s not really dead. It may look to us like he died a few thousand years ago, but when people suffer and clamor for help, he’s always there on Vulture Peak, preaching the law. Bernie’s like that, too, in a way.”

“Bernie’s in Vulture Peak? He didn’t like Indian food.”

“I don’t see anybody. Today all I see is snow and rain, which means another day with no walks.”

“I see and hear him everywhere, Aussie. Sometimes I think he’s more vitally alive now than ever before. Bernie believed that the only things that live on after our death are the results of our actions. His actions had so many results that it’s as if he’s walking around outside right now, talking on the phone and smoking his cigar.”

“I guess not. He didn’t care for inclement weather.”

“Didn’t care for walking, either.”

“Oh Aussie, we live in stories. I choose to live in the happy story that Bernie sent me this ring.”

“It would have been a happier story if he’d sent you a solid gold ring, not titanium. Cheapskate!”

From the Police Log of the Montague Reporter for January 19:

11:06 am. “Party came in yesterday to report harassment and is back again to advise that it is continuing. Party advised of options, and also advised that the person he thought it was has been deceased for about 20 years.”