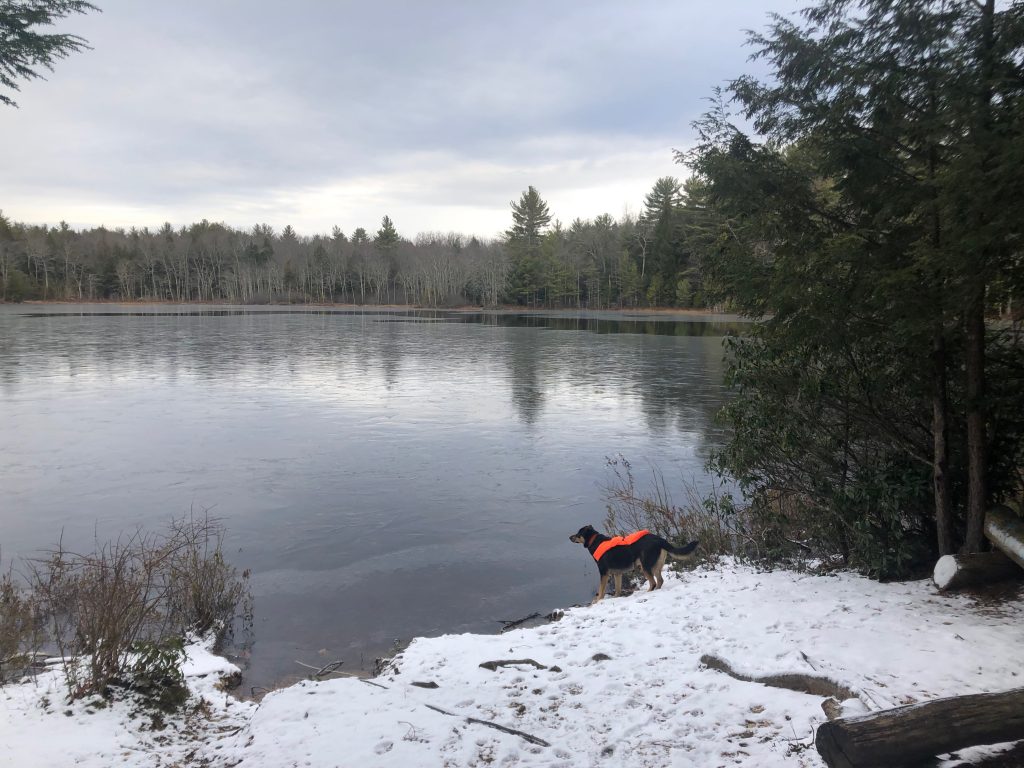 Probably got it when traveling back home Thursday night, though I wore a mask on the plane. Friday night felt a sore throat coming on, covid test negative on Saturday morning, assumed I had a cold, went out with Aussie and did various jobs, and things went downhill from there. Last night tested again, and this time there was a dark line on the strip.

“It’s too dark,” I tell Lori, my housemate. “It’s supposed to be pink.” What a whizz in denial.

Did another test, same dark line. Looked it up and it said that the darker the line, the more viral you are. By then I was sleeping 15 hours a day. Aussie isn’t talking to me since I haven’t taken her out yesterday or today. Lying on the futon in my office, she looks up at me when I come in, groans, turns around, and goes back to sleep. Which is pretty much what I do.

I have to admit that whenever we’ve counted who’s had covid and who hasn’t, I felt a subtle nuance of self-satisfaction to be a member of the latter group, as if somehow I’d done some extra bit to qualify, which others hadn’t.

No longer. It’s always a good lesson for me to see that, in most things, I’m not so different from anybody else. Genetically we’re so similar, minds acculturated and conditioned similarly. Why, oh why, do I cling to comparisons that emphasize the differences rather than the huge similarities? Why spend so much energy combing my mind for more individual traits, more uniquenesses, in the face of vast reserves of similarity?

The longer I live, the more I’m stunned by patterns of conditioning that still won’t let go. Some say that the Buddha’s realization got rid of all that, that’s why it was so powerful, but as a woman I say: “Oh yeah? Is that why he wouldn’t let women become nuns? And when he finally agreed, within humiliating strictures they had no choice but to accept?”

Most women wouldn’t accept those conditions now, I reflect. But then, I reflect again, what and how much are we ready to sacrifice to go after our heart’s deepest desire?

So here I am, ready to go back to sleep after 10 hours of sleep at night. Lori filled the birdfeeders, she’ll take the dogs out when she comes back from work, may even take up the laundry bin I left at the foot of the stairs because I didn’t have strength to bring it up. I’m no good to anybody, I whimper idiotically.

Then remember Bernie after his stroke, helpless, paralyzed in half his body, unable to do for himself never mind for others. And he seemed to be okay with that. Gave in to it completely.

“How are you?” I’d ask first thing in the morning when he got up, which was never earlier than 10:00.

He’d shrug. Was there a choice? So he plunged into it because that’s what was happening, why do things by half?

I used to wonder what went on inside his head. Did he wish to die? He certainly managed it after three years, and pretty quickly at that. Did that just happen, or was it a fulfillment of some deep, unspoken wish?

You have covid, I tell myself, join the human race. There’s a choicelessness about it that I like. Cancel dental appointment, cancel a talk I was to give by Zoom this evening. Most important, eschew heroism. Don’t push the envelope. Stay inside your (slightly warm) skin.

Oh, this beautiful body! This wonderful, 73-year-old body that is usually so healthy, that holds up through so much. What a marvel you are.

Still, I’m not a happy patient.

“Everything passes,” my sister reminds me on the phone.

“What are you, a Buddhist or something?”