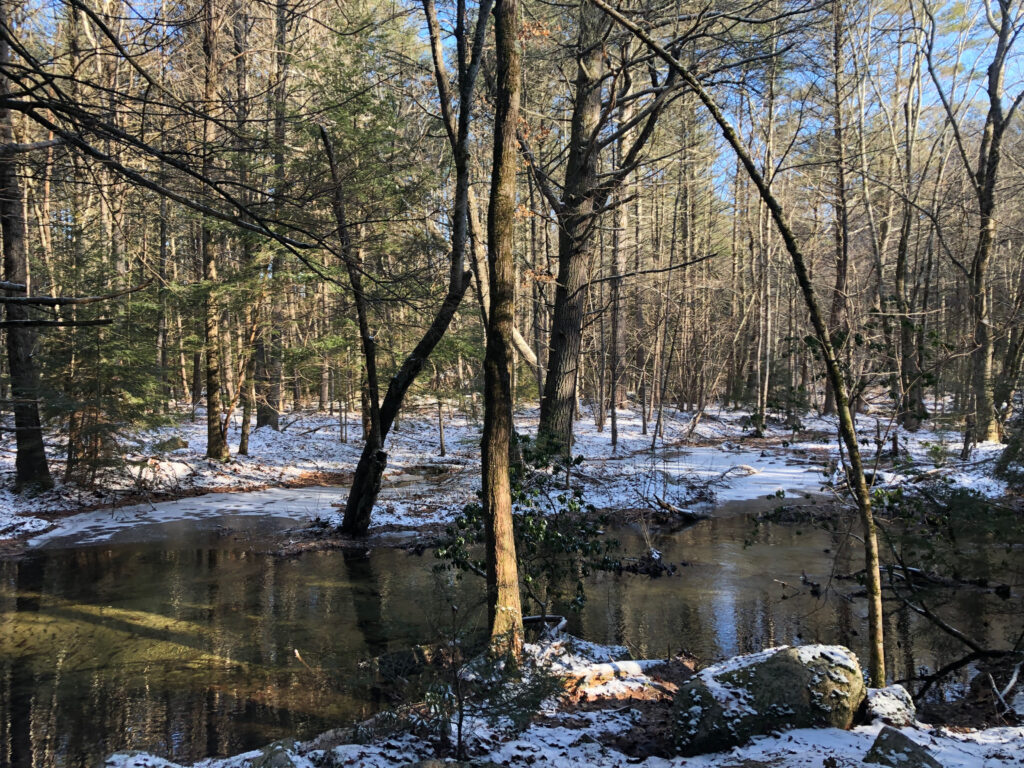 I arrived home yesterday from Israel, in the middle of the storm that hit so much of this nation hard. We were lucky here in Massachusetts, lots of rain but almost no snow, some winds but no loss of power.

As the plane landed in Newark Airport a number of people vomited into bags, but I’ve been through worse and the landing itself was as soft as a kiss. Kudos to the pilot! I drove slowly up to Massachusetts, expecting to be lambasted any moment by wind and rain, but it wasn’t like that, at least not till much later in the afternoon. When I got home, I went shopping for food and then, when the sun actually came out, walked the dogs, who were in raptures to see me.

This morning it said 9 degrees Fahrenheit feels like -8, but I dressed warm and went back to our old woods with Aussie (too cold for Henry). The cold was bracing and pleasant at the same time.

We walked in the woods I’d wandered in, above the Montague Farm, since 2002, when we first arrived here. Trees have fallen, paths have changed. The photo above was my iconic photo of the pools we reach, but the icon has changed (who says icons don’t change?). The thin tree limb that used to arch over the pool, giving me a sense of seeing a forest fairy scene like in A Midsummer Night’s Dream onstage, had been cut in the middle. Nothing to aid you in seeing it like a stage set, from now on I have to depend on my original eye to see the beauty.

Three days ago would have been Bernie’s and my wedding anniversary, and I was remembering the first time I saw him. A Zen practitioner and Jungian analyst had brought me up to the Greyston Mansion in Riverdale, New York, owned by the Zen Community of New York. I was curious to see an American Zen master, had only met Japanese teachers at that time, but agreed to go only after my friend promised to bring me back home to Brooklyn afterwards.

We thought we were going to sit with the group, and upon arrival discovered they were having a meeting instead, so we entered the big dining room where they sat around a few tables pushed together. They looked up at us and gestured for us to sit at two seats in the corner of the enclave.

Across from me sat Bernie, or Sensei as he was then called. I know many people who say that the minute they saw their teacher they knew this was it, they didn’t need to look any further, as if some extrasensory communication had taken place. That did not happen to me. My first impression of him was that he was arrogant and unattractive. I frowned at how a different woman sat on either side of him (not one of whom was his wife) and immediately sensed how people kept their eye on him, how cocked their ears were in his direction. I didn’t care much for any of that.

What I did care for were their plans for Yonkers. The Greyston Bakery was in full operation and the community was already cooking for a shelter providing meals to homeless folks on Main Street.  It was 1985 and I wasn’t aware of other Zen groups doing that. But the meals were just the beginning. They were going to build permanent apartments for homeless families, childcare centers, hire more folks from the neighborhood in the bakery, and move to Yonkers. At that time no one spoke of an AIDS center and housing, that was all ahead for us.

I say us because right then and there, I felt I was witnessing something historical taking place, a new turn of the dharma in the West, and wanted to be part of that. I actually felt it that evening, sitting around the rectangular tables pushed together, hearing scenarios that to Sensei seemed as concrete as plans for making dinner but to most others seemed like bedtime fairytales.

My friend, who did indeed bring me back home to Brooklyn, had no interest in that, came back only a few times, and left. I stayed.

It’s funny how at certain times something happens—in a particular year, a particular evening—and all your life has changed. I am so lucky to have made such a dramatic resolution, then decision, then commitment, all arising out of that evening, which wouldn’t have happened had my friend not promised to drive me there and drive me back.

Seated next to me on the plane was a blonde woman in her late 40s, not a wrinkle anywhere on her beautiful face, who lived in Israel and who told me that all her life she’d wanted to live in the US. We talked about that a while, and then started the descent to Newark. The clouds parted and I looked at the dots of light along streets and houses that were still dark, their people still asleep, and wondered at the big and small events in their lives, the big and small decisions they’d made that changed everything.

The birdfeeders are full, the birds feeding eagerly in the cold. In my absence Lori bought feeders more resistant to squirrels in place of my old ones. Birdseed has doubled in price this past year and she was concerned the squirrels were getting most of it. I’m grateful to this wonderful woman for taking such good care of the dogs, the home, the birds, enabling me to continue to travel and work out the threads of karma that began that evening in Riverdale almost 40 years ago.