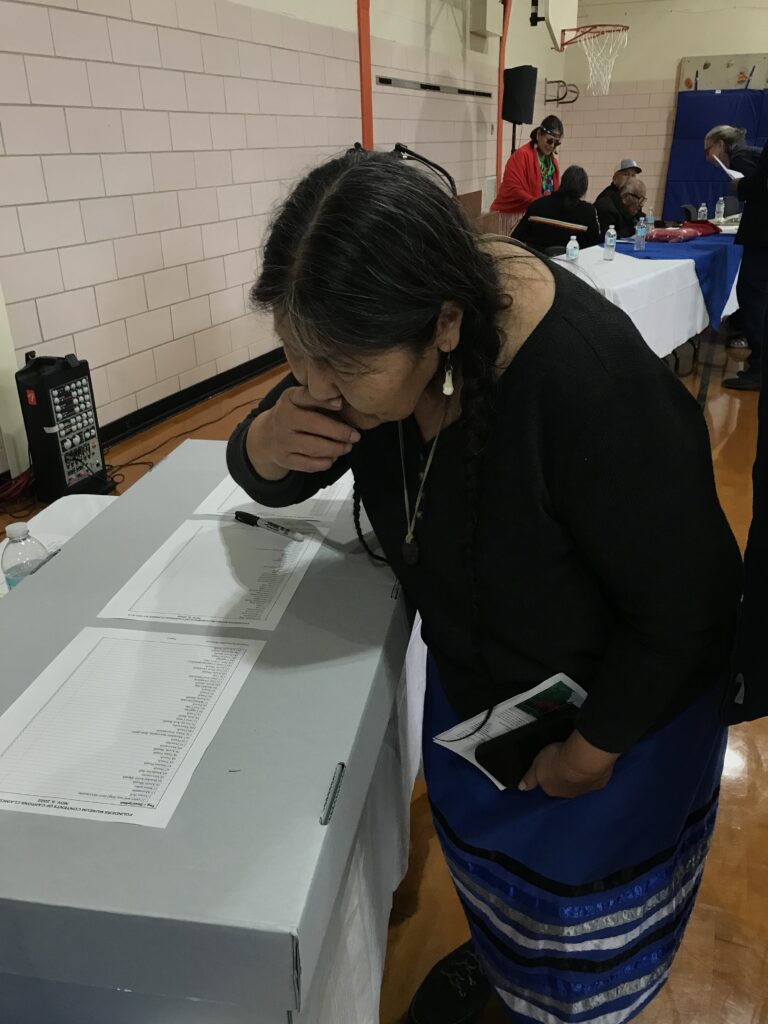 “Being humble, sinking my feet into the ground.” Violet Catches, an elder from Cheyenne River Reservation, wrote me these words this weekend.

Oh Violet, my heart goes out to you!

This past Saturday I went to the pretty New England town of Barre, MA, to witness and support the return of personal artifacts looted from the bodies of those killed at Wounded Knee over 130 years ago to their Lakota descendants. I specifically wanted to be there for Violet Catches, a woman I love and admire, whom we first met at the Zen Peacemakers’ bearing witness retreat in the Back Hills more than 7 years ago. She, too, is a descendant.

I thought I would be there for her; I didn’t have a clue.

How did a little private museum, small enough to fit into the town library, get a hold of moccasins, clothing, beads, and many other things that were taken off the bodies of so many men, women, and children murdered at Wounded Knee? The articles were looted and sold off to a trader, who in turn brought them for sale to New England, a Barre man bought them and, before he died, gave to this local museum. The Lakota have been trying to get them back and bring them home for the past 30 years. Thirty years of distrust, stubbornness, arrogance, miscommunication, anger, and frustration.

It ended this past Saturday.

At least 120 people crowded into the local elementary school. On one side sat the trustees of the library; on the other sat elders from Pine Ridge and Cheyenne River reservations. Young people from Pine Ridge also arrived, accompanying their elders in song and prayer. There were also political and local leaders who welcomed the Native Americans from South Dakota.

Aware of the acrimony that had been there, I wondered if everyone would simply be on their best behavior, smile for the cameras, and wait for it all to be over.

That was not what happened. The Lakota elders were warmly welcomed in brief, to-the-point speeches. When prayers began, we all rose to our feet. Locals had brought their children to witness this.

“I don’t know why they’re making such a big deal,” Violet had said on the phone before flying here. “It’s a memorial; it’s sad.”

And yes, it was sad; everyone said that. They also said that what had happened, these artifacts looted from murdered bodies and sold off to someone in Massachusetts, was wrong, a stain on everyone. This repatriation didn’t right the wrong, but it was a step in the long process of atonement.

You might think that atonement is accompanied by misery and depression. Perhaps in certain cases; at the same time, we’re at-one with the harm we committed. We don’t fight it, we don’t explain it away or minimize it, we acknowledge it fully. And when we do that, magic can happen.

I felt that magic happened Saturday. I looked at the faces of the museum trustees and they were not just relieved, they looked joyous. The Native elders’ faces were serious, weighed by what they were here to do. They bent their heads in prayer, they told us of their family relationship to Chief Big Foot and others, at how the spirits of those killed could not be at peace till their possessions were restored to them.

But they also asked the trustees to line up in front of the hall, draped gifts of blankets around their shoulders, and then asked us all to line up at the very end and shake the hand of each and every trustee standing.

Many had tears in their eyes.

They hosted us for a generous and gracious dinner, and after everybody left some of us returned to the library to witness the loading of the first van with the long, white, rectangular boxes of 130-year-old personal artifacts that were finally going home, a list of items taped on top of each box. We were a small group by then, it was dark, and very quiet. The loading of the van took some 45 minutes, done slowly and ceremonially, accompanied by sage smudging, prayer, and song. More vans were going to be packed up the next morning.

There’s more for me to say about that evening, but I will leave that for my next post.

I never cared much for the word healing; it seemed to denote some final, permanent stage, as if life is messy till we become healed, and then we’re healed forever. So far, I have not been healed forever, nor do I expect to be. At the same time, I felt a mysterious energy inside the school and then outside the library when the first boxes came out, something that did not just arise from the actions of the people there but from a space and time beyond that, beyond us. It broke our hearts and also lifted us up. Those boxes did not contain things, they contained something very different. They were going home, and were taking us home, too, wherever our home is.

The Barre Museum did the right thing. As a private museum, they weren’t subject to federal regulations for relinquishing native artifacts, and this actually enabled them to do the repatriation relatively quicky (if you can call 30 years quickly). But as I was driving home that night, I thought of our big public museums and fancy university museums, all of whom have enormous resources to quickly repatriate the artifacts they have plundered from native peoples, and who instead use those resources to hire lawyers to explain why they can’t do this quickly, how challenging it is, the bureaucracy they face, etc.

I spoke with the curator who oversaw the identifying and cataloguing of the artifacts and talked about other institutions that only do minimal or no repatriation, hiding behind the notion of private donations made by individuals who claimed they bought the artifacts. He said that in his experience, even those institutions that show a bill of sale, the bill of sale means nothing. Most Native Americans had no sense of private ownership, so to transact a sale meant nothing to them. Bills of sale are meaningless in this context and the museums know it.

“They just want to hold on to what they have,” he replied.

A culture with little understanding of private ownership came in contact with a transactional culture that knows only that, only me-mine-ours, and the second won out. Till now. Till now.

Imagine what would happen if these places returned everything to the descendants or tribes of those they stole from. Imagine the energy released by such an act, the apology, the acknowledgment, the breath of relief, and the giving back. Imagine what it would do for our nation.

Jimena Pareja, whom I work with on behalf of immigrant families, came for coffee yesterday and I told her about this. She said: “Eve, those are the true reparations.”