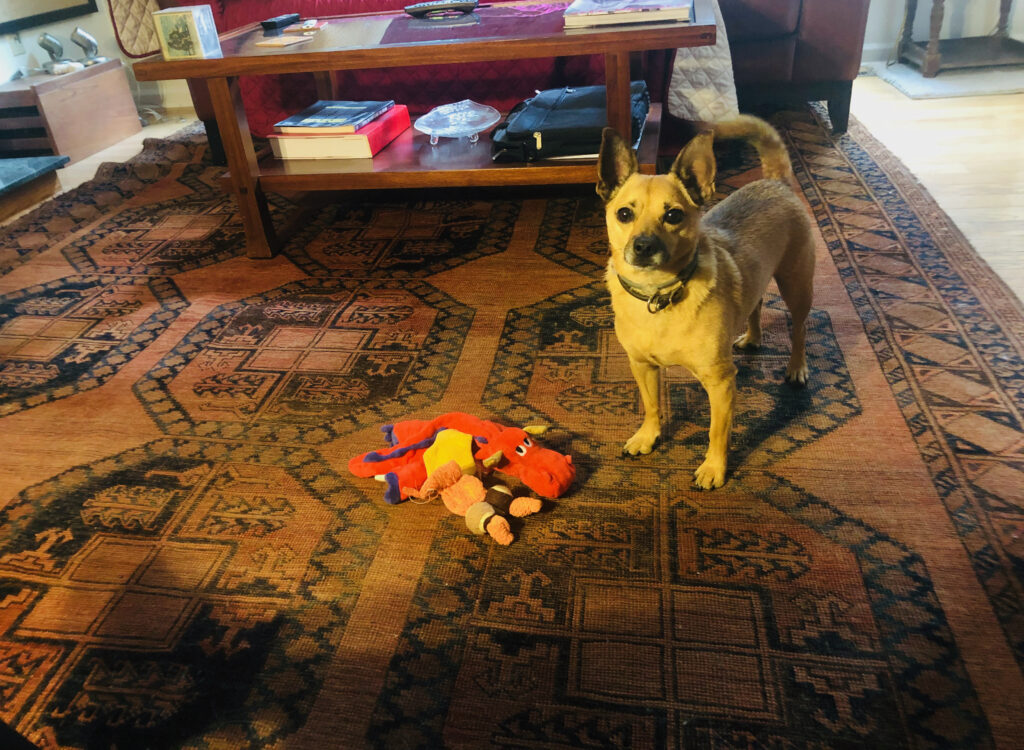 “Look at Henry, Auss. Isn’t he cute with Moo the Red Cow and—and whatever the orange thing is?”

“And look at him with Billy Bunny and Albert the Puffin that I brought him from Grand Manan. I’ve never met a dog who loves his stuffed toys as much as Henry does.”

“He’s almost 4 years old, all grown up. Time to put away puppyish things.”

“Aussie, you just turned 5 four days ago. I cooked you some steak.”

“It’s not your birthday anymore.”

“I celebrate my birthday for a month. But you’re right, I’m no longer a pup. I have no interest in frivolous things or in being silly. It’s time to get serious.”

“You know, Aussie, I like to watch Henry play with his toys. He brings them over to me to throw, and once he finds them, he snarls, shakes them hard, tosses them high up and then catches them again even when they’re almost his size. It’s a heck of a show. Everyone who comes here loves to watch Henry.”

“Henry isn’t entertaining, he’s just foolish. Now me you can have a serious conversation with. We talk about relationships, current events, ethics, metaphysics, the lack of science in climate change, you name it. Nothing stupid. But Henry!”

“Aussie, did it ever occur to you that God may find all of us very entertaining?”

“I am not entertaining! Never was! I’m always, always serious.”

“Those are precisely the ones that God would find funny. From where God sits, we all look incredibly silly with our pretentious opinions, our ponderous sincerity, our dos and don’ts, the flag-waving, handwringing, world-worrying, lesson-learning and morality-mongering. She would probably say: Enough already! if not for the fact that She’s laughing so hard.”

“There’s probably a lot to laugh about you but there’s nothing funny about me. I have a very important role in life.”

“To teach you about right and wrong, the correct political viewpoint which is to take back the election of 2020—”

“To teach you about good food, like steak, about healthy habits like terrorizing rabbits, rules of hygiene—”

“Like not washing my blanket too often, it’s best when it stinks. Like supporting local economies by shopping at the food co-op where they sell the biggest and freshest marrow bones. Karma brought me to this house so that I could teach you things. Why are you laughing?”

“Because you take yourself so seriously, Aussie.”

“Have you ever watched yourself talking to students on Zoom? I can hear the Buddha laughing all the way from India, or wherever he is right now.”

“But that’s the point, Auss. We get pissed at Fox News—”

“We worry about many things, most of which won’t happen and instead other things will happen we never thought of. We argue about who’s right and who’s wrong, we speechify and pontificate—”

“—and up there or out there, someone is laughing at all our earnestness, our intensity and serious-mindedness because we know so little about this world, Aussie. You know how I laugh at Henry snarling at me over Pinky the Elephant (She’s mine!) or at you when you pounce on a squirrel that is already halfway up the tree?”

“You laugh when I pounce on a squirrel?”

“God laughs at all of us, Aussie, in the same way.”

“That’s the saddest thing I ever heard.”

“It’s not out of mockery or spite, Auss, but for Her, we’re Saturday Night Live! every minute of the day.”

“You play you, Aussie. No one can play you like you.”

“Rin Tin Tin can play me. Or Laika, the Russian space dog. Why are you laughing? WHY ARE YOU LAUGHING?”