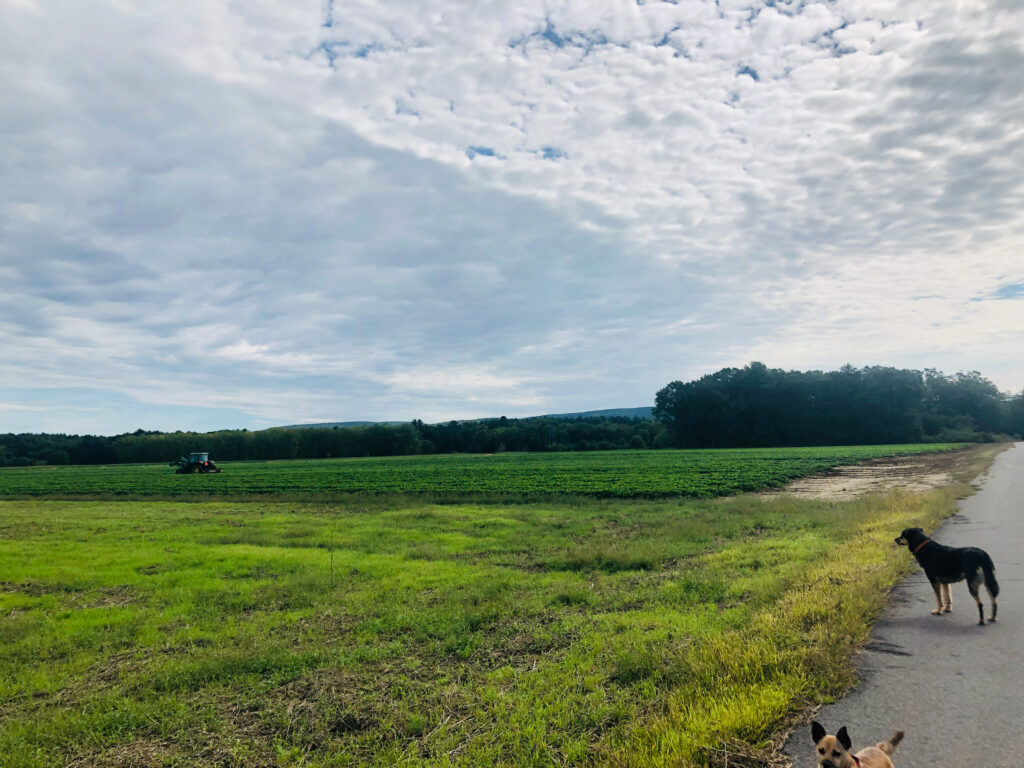 It poured Tuesday evening, and by the next morning things had changed. I knew right away that fall had started despite the warm temperatures and the green leaves. The air was different, the light was different. I don’t have to search for leaves coloring or even falling on the ground, I know it in my body. We’ll have more hot days, the windows will remain open for a while—and everything’s different.

I took the dogs back to farm country. We hadn’t walked on farm roads during much of the summer because the water holes had all dried up and they need water on those hot treks. A week ago, we had two days of torrential rain, and still there was no water because the earth just sucked it in, leaving nothing on top for animals. But after last Tuesday’s storms I could hear the sounds of streams and culverts gurgling happily, as if saying: We’re back.

The dogs chased each other up and down rows of pumpkin plants, a tractor tilling them up ahead. Corn season is over, pumpkin season has begun. Everybody was working, no cars or cyclists causing you to hug the sides as will probably happen this weekend, quiet and peaceful all around.

So, what’s that scratching inside? Why the restless scan of the horizon even as I laugh at the sporting dogs and give them treats? Could it be that I miss some drama? Excitement? Even mild dissatisfaction from sheer habit and the long-familiar feeling of: Life’s tough? I start wondering if I’m really up to living a life with little drama or struggle, whether I’m really up to—get this—living a life of peace.

There are people close to me who can’t understand why I don’t live in the city. They remind me how much I used to love living in New York: There are a lot more people there, a lot more potential and opportunities for friendships and maybe even a new romance, lots of interesting things going on.

Sometimes I even feel a little guilty, as if I’m hiding, taking the easy way out, not participating in the world as much as I can. It’s almost impossible for me to fully express what it is like to live in the country, with its slower rhythms, the waving hand of drivers that pass you on the road or of the tractor driver as he neared us, rounded the rows, and continued on his way, the easy way we talk to neighbors, the intimate laughter we share with each other as if we can’t believe our luck living here in the Valley, the nights outdoors when I step out to listen to the fading sounds of summer just before I turn off lights and close up the house. How healing it all is.

This morning we emerged from a lake of shadow formed by trees along the road into warm and golden sunlight, and it hit me that if all I had in my 72 years was this one day, this one morning walk with the dogs, it would be glorious.

I know of the many people who wake up morning after morning uncertain about feeding and sheltering their children, whether to stay home or hurry to a refugee camp, fearing the lack of milk, water, food, and safety. But they also struggle for life, and I wonder if that’s because at some time, perhaps when they were children, they kicked around an old hat stuffed with newspapers and called it a ball, aiming for a distance between two tents they called goalposts, or else carried in their arms a doll made of twigs bound together and covered by cloth, and they laughed because the sun came out and all they needed for play was time and imagination.

In their own way, they too had this one day, this one spectacular morning, and they could not forget it.