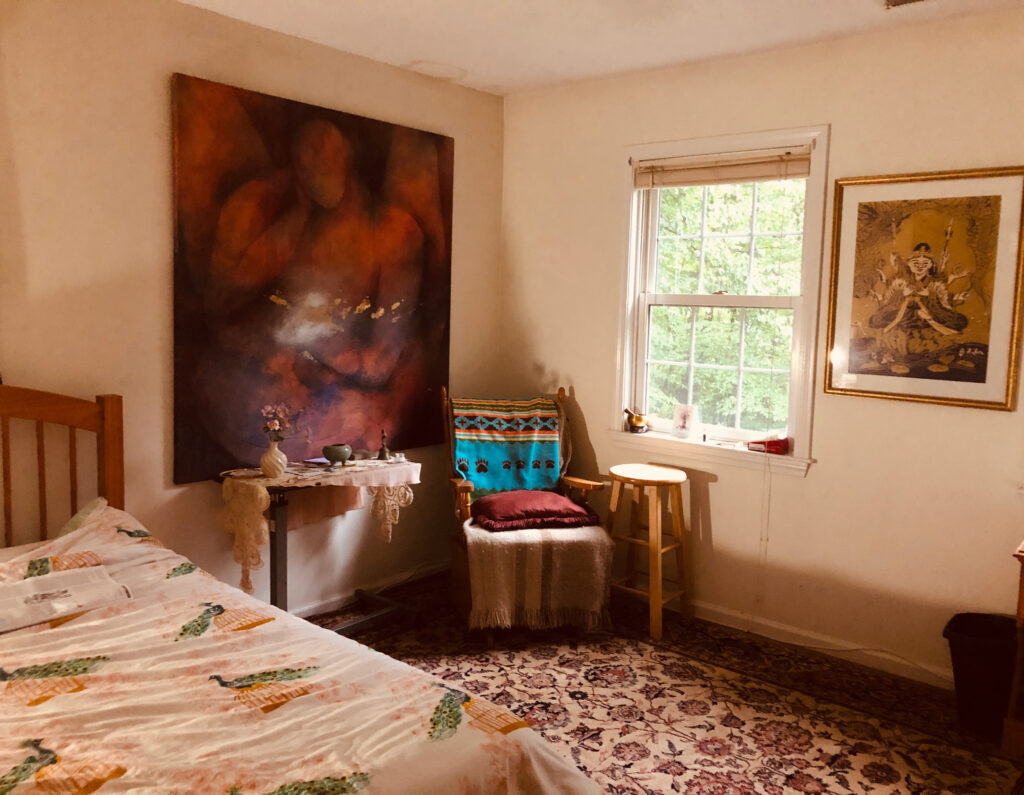 I open my Labor Day celebration by sitting this morning, stationary on the corner chair of the bedroom, my favorite room in the house, the room that had been Bernie’s and my bedroom till he died. After his stoke we had to make some changes, eventually letting go of the enormous king-size bed we’d shared. The stroke brought him a lack of control over his limbs as well as a lack of proprioception, and he’d often roll into me during the night without even feeling it.

Where does your body end and mine begin? An interesting Zen koan, one we practiced with over and over again. You love the person next to you, but you’re deeply asleep (exhaustion marked those three years) and you’re suddenly awakened by something crashing into your body, often pushing you to the edge of the bed (a couple of times over the edge). At first you make a joke of it:

“You rolled into me,” I’d tell him. “I think you lost your sense of proprioception.”

“What’s that?” he’d ask for the hundredth time.

“I think it’s a sense of where your body ends and mine begins,” I’d say.

“And that’s bad?” A Zen master, after all. “Let’s sleep like this all the time.”

And sometimes I’d say, “I need my space,” which is a little different.

Space. Bernie could fill every inch of it with words, ideas, suggestions, presence. Even when he was quiet the vibes in the room would be so powerful that I would hurry to find refuge in my own small office, or in our bedroom when he wasn’t there.

The following memory embarrasses me every time. I picked him up at Boston’s Logan Airport after he’d gone to Europe for 6 days. In the car, he bent over to give me a kiss. “What’s wrong?” he asked when I didn’t reciprocate.

“I could have used 3 more days of your being away,” I told him.

He got a little upset, but there it was, I needed space. Space away from that intense focus, the protruding, stubborn chin, the demanding presence, the beingness that enveloped the room.

We finally let go of that big king-size bed and got 2 beds for the room, one of which I sleep on to this very day. I, as usual, drowned in the practicalities of post-stroke life—finding the beds in a local store, negotiating price and access—leaving him to mark with sadness this big change in physical relations. We both knew it. He wouldn’t roll into me anymore or drive me to the edge of the bed, I’d have my space, I’d have my sleep.

His last words to me from the bed, struggling with sepsis and pain before the ambulance drivers took him downstairs to the hospital, where he would die quicker than anyone guessed, with only me in attendance, were: “I’m too much for you.”

He wanted to give me the space I’d always fought for. My space.

For a long time it didn’t do me much good, those words haunted me for three years. Did I really need that much space, I wondered. What would have happened if he’d constantly banged into my exhausted body or sent me to the edge of the bed? That’s his job as a Zen master, I’d remind myself, but not as a husband.

“I’m too much for you.” I can never get that last act of generosity out of my mind. Not I love you, which I would have preferred, but: Here’s your space again. I give it back.

My brother stayed with me the past days and slept in the bedroom. “What a beautiful room,” he said. “A wonderful space in which to rest.”

“It’s healing,” I said without much thought.

Now, 24 hours later, I think to myself that maybe that is the purpose of the room. Not just to serve as a reminder of what once was, but to be fully occupied as I enjoy the space that he so generously finally gave me.