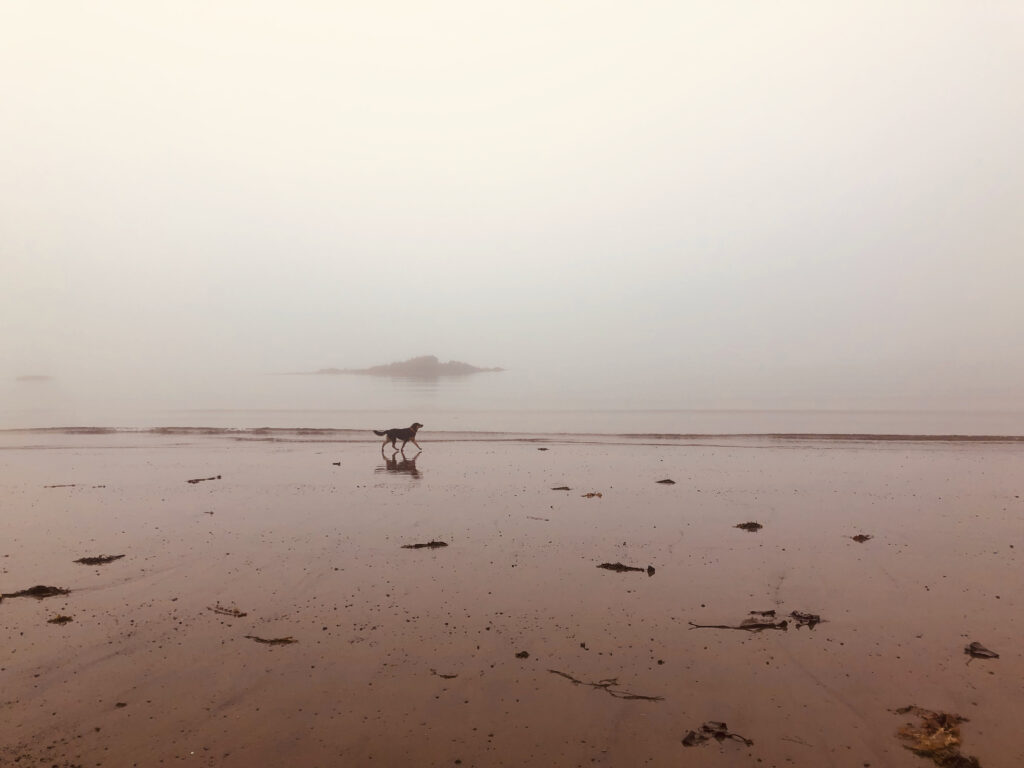 Aussie’s looking into the fog. Does she smell something? Hear something?

Across the water, close to Grand Manan where we’re staying, is Ross Island, where we went the other day, carried by an ancient white motorboat called Fogseeker in blood-red letters. Aussie wouldn’t climb into the boat, so in the end Peter Cunningham and Ara Fitzgerald, my generous hosts, and I flew across the waves. Peter left us off, avoiding the rocks jutting out of the water, and Ara and I walked on the rocky beach towards an old lighthouse at the very point where Ross Island ends, only the lighthouse is no longer there, it decayed and finally collapsed. There we rendezvoused with Peter, who’d had a hard time getting the motor back on, but we got into the boat, motor was fine, and we returned to Grand Manan, Aussie waiting at water edge, flapping her tail loudly at our loud approach:

She, whose life mission is to enter every freshwater pond and lake and sample it up to her belly, looked askance at the waves encircling Grand Manan. But this particular day we walked for a few hours along the beach, the fog lifting only at the end, and it seemed as though she discovered something new about herself she hadn’t known before. She rushed over to the waves, tail circling high like a flag, and as soon as they covered her paws she dashed back:

“Watch me outrun them!” she yelled happily. Never seen her so happy as I saw her then.

When she wasn’t running we’d both look out at the mist, grayness everywhere, no shapes, no objects, nothing to see or be seen by. Only the outcropping of rock and occasional screech of seagulls to remind us that we weren’t the only solid beings in a vaporous, empty world before Jehovah created light and distinguished between light and darkness.

I loved it. Always feel comfortable in wide, indefinable spaces, just gray or just white, nothing for my senses to latch on to and trigger the endless opinions and monologues of my mind. A world without attachment, quiet and serene, easy peasy.

And then we come back to The Shed, a 100 year-old fisherman’s wooden shed and wharf which Peter and Ara, together with a community of old friends and island mates, are raising out of decay and collapse. There’s a new floor with tangled-up wires and chains, hooks, an old painted drafting table and counters made up of throw-away wood, thick, stained gloves, a fisherman lantern, ancient photos from the time Peter’s father was here and raised a family, a leaky roof, multi-colored buoys galore, coiled ropes everywhere, a wood-burning stove for winter with attendant logs, and rectangular lobster traps on the perimeter that, draped fortuitously by wooden boards of various sizes, magically turn into tables, stools, and chairs where Peter and Ara entertain half the inhabitants of Grand manan.

Coming back from staring out at the mist, I found Peter seated in the Shed (see below), computer and projector aimed at a large screen blocking the empty doorway leading to the pier, looking at hundreds of photos that he was preparing for a show this evening at the island’s museum.

I watched from behind as slide after slide appeared, people I knew and most that I didn’t, places I recognized and many I didn’t. There were his and Ara’s fisherman families from the island, families he grew up with over many years. There was Bernie and other Zen Peacemakers, the guardhouse of Auschwitz-Birkenau and the corpses of murdered Tutsis in Rwanda, teepees under shooting stars in the Black Hills and the mad chorus of Manhattan lights.

There were children smiling, their blonde hair floating down to the ice cream cones in their hands, smoke enveloping the Towers in downtown Manhattan that day in September 2001, sheep ferried across the Bay of Fundy and basketball players rushing for lay-ups in a tournament held in memory of a young woman who played basketball and died. Old and new photos of the singers Janice Ian and Bruce Springsteen, birth and death so intertwined it was hard to tell the difference. You can see some of those photos on Peter’s website.

As I watched Peter look at his creations, taking this out, editing that, I saw the true cacophony of all that grayness in which Aussie and I had walked earlier. The fog (which Peter’s father had studied his entire life) had throbbed with life, perhaps that’s what Aussie kept sniffing at as she raced the waves. It seemed as though there, there was nothing, and here there was everything.

As always, in the beginning you have your preferences. What a great photo of that little girl—just look at the expression on her face! I love that pizza sign. And then, shock! Bernie, dead, lies on a mattress in the room that now serves as my office, lifeless face peering out from under a Pamsula quilt. No, no, not that one! A monument of skulls in Murambi, Rwanda—not that one, either! This is okay, but that one’s better. I don’t want to see this, but that one’s great.

It’s easy to run along the beach and feel unattached, free as a bird, nothing pulling you right or left. And then you enter The Shed where thousands of photos and lifetimes roll in front of you—his life, your life—fading one into the other. You tell him to slow it down a little, let the viewers on Tuesday night appreciate each more. But slow or fast, one fades into another and into another. Magnificent, memorable photographs disappearing one into another.

This morning I write from The Shed. It’s rainy outside, which doesn’t disturb Aussie from sitting out on the pier, wondering why her landlubber human isn’t taking her on another long walk. Raindrops come down through a leaky roof while, further up in their 2-century old home, Peter prepares to leave soon to be with a very sick brother back in Massachusetts. The gray was back this morning, but it’s begun to lift because I can see ducks in the water, floating in a line towards Ross Island.

We hope we got the subscription tool working again. Thank you for your patience. We’ll do whatever it takes to include you, at least digitally, in this wide wide world. 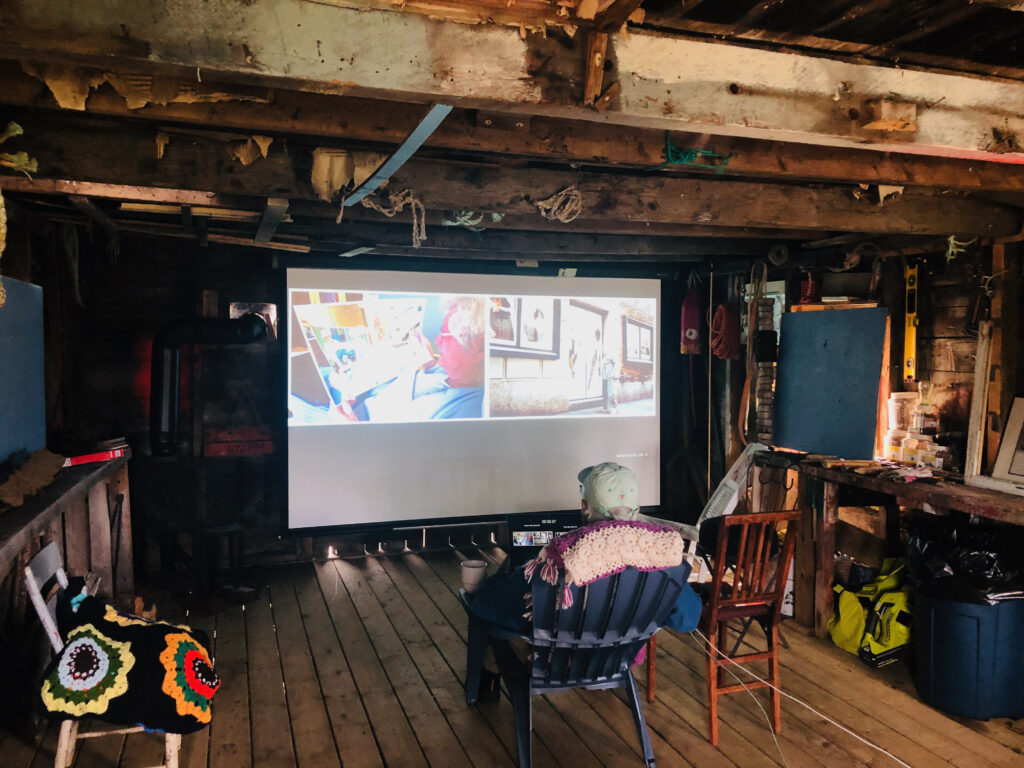