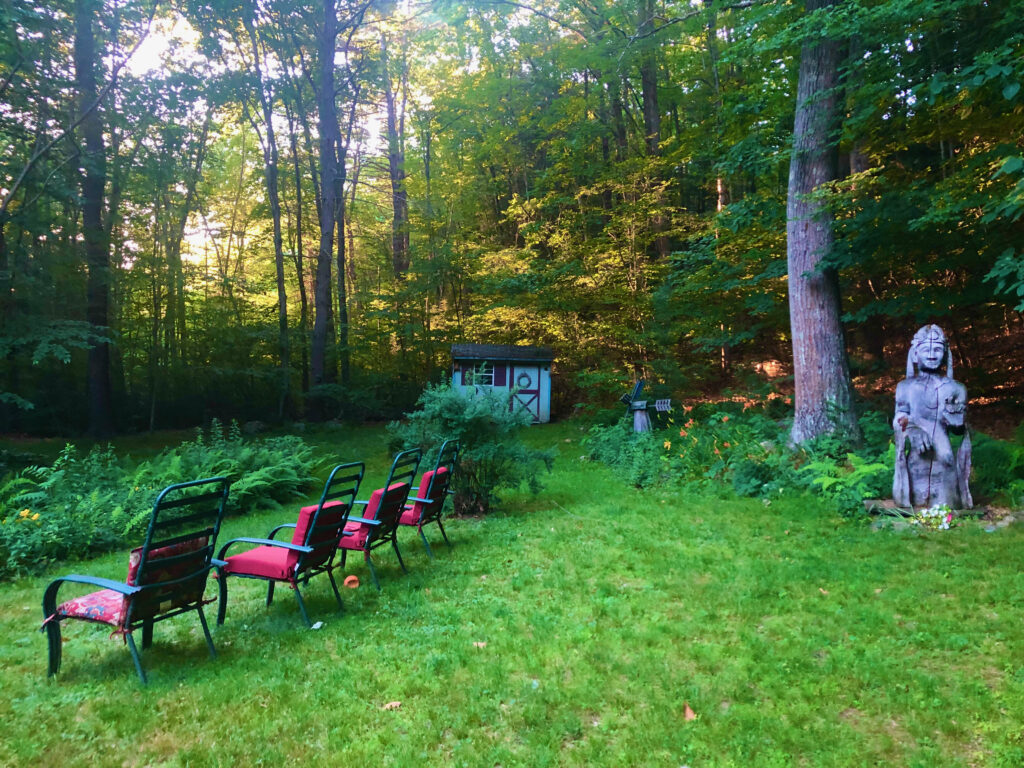 I think it’s Muriel Rukeyser who wrote: “It is always the poet’s task to defend the relevance of radiance, whatever its shape and subject.”

I’ve wanted to be a poet for this very reason. Writing and reading good prose are both rare privileges; telling stories is as basic to human beings as making a fire or pointing up at the stars at night and wondering about the gods.

But radiance is always and everywhere here, even when we humans don’t see it. True, when the sun sets and the light bursts between the trees that guard our rotting gazebo, it’s easy to recognize it. Even now, on a hot summer day, the afternoon sun warms up not just the leaves but also the laundry hanging on lines outside, and you can’t mistake the golden light. The entire air turns radiant.

But it’s the poets who see radiance in the nighttime, even without starlight. Or in the way a small Chihuahua, lips parted, happily takes in the smell of last night’s rain on a wet meadow.

Yesterday was hot and humid, and as I walked home with Aussie it looked like the rest of the world was taking a nap. Things were flat and quiescent. I saw some movement up ahead and wondered if it was another small critter. I worry now because Aussie has become a mass murderer of groundhogs, bunnies, squirrels, and chipmunks. Lori points out that there are lots of young ones out there just learning to find their way, not as vigilant as they should be, perfect targets for the serial killer I harbor at home.

But there was no critter there, just a stem of moss dancing in air that was completely still. Upright, it waved wildly, then collapsed prostrate on the ground, then suddenly flew up in martial attention, circled the air, shook violently, fell down on the ground, and started the cycle all over again.

Why’s it doing that, I wondered. There wasn’t a breath of air, not a hint of breeze, no movement at all other than the human and dog walking slowly home, the dog panting in the heat. The rest of the moss was as sleepy as the landscape, not a move, except for this stem that kept on dancing in the air.

I looked at it and asked: “What’s up, moss? Why are you dancing?” It gave me no answer—or rather, the dance was the answer.

I’m very linear in my thinking: This causes this, which causes this, which causes this. It’s a bad habit, my way of bringing this mysterious, radiant universe down to my size (or the size of my pea-sized brain) and concluding that I figured it all out. This entire world, our whole life, is one big Zen koan, and even though I know that God help the Zen student who, presenting a koan, says that she or he is trying to figure it out—that’s what I still do. I still try to work things out, come up with some formulas and reasons, anything to make things coherent and understandable.

It’s an ego trip. Perfectly understandable given that I dislike unpleasant surprises and unlooked-for events as much as anybody, but still an ego trip.

It reminds me of how the two dogs play. I walk in the woods and turn around to see Henry doing his stalking bit, belly and head on the ground, hind legs and tail up, following Aussie, coming up behind him, avidly with his eyes. Aussie ignores him and smells the flowers. Henry gives a little growl, begging for notice. Aussie ignores him. Finally, he runs over to her, jumps up with another growl, and gives her back leg a friendly bite. She scampers past me, ignoring him the entire time, but Henry runs over to me, a triumphant look on his face: Did you see how I showed her! Did you see how I showed her!

Like many people, I’m avidly looking at the first photos sent us by the James Webb Telescope. Hollywood’s best special effects department couldn’t come up with the pictures we’re getting. But beauty, awe, and radiance aren’t just to be found out there, they’re in a little stem of moss that flutters and shudders with no apparent cause, and even in a white mailbox that, to human eyes, is empty but whose emptiness still holds the nest of young phoebe fledglings that were hatched, fed, kept warm there, and are now gone. Maybe not so gone.