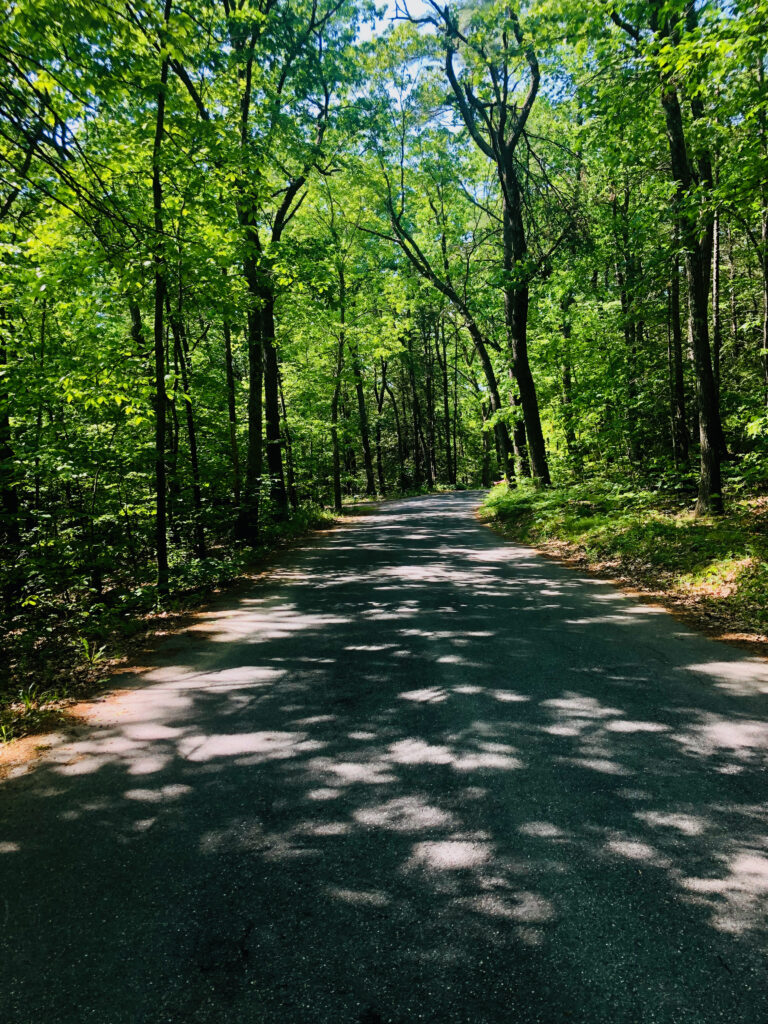 “Innocence is the ability to be found by the world; it has nothing to do with naivete,” says the poet David Whyte.

I feel there are arches everywhere in my life. The photo above is of the road above the house, the trees bending towards each other high up. Each time I go out into the world and each time I return home I pass under these arches and feel a taste of adventure, as though something is yet to be discovered right around the bend of a road I’ve traveled each day since 2004.

I’ve written before about a fantasy I’ve had all my life, of walking outside in the dark (I always step out before closing up the house for the night) and seeing lights descending from the heavens far out in the fields. I run through the forest, sure that a spaceship has just landed, visitors from outer space have arrived, and I will be the first to see and greet them. As I run, I’m equally sure that no one else has seen them but me, and I must gather up my courage for that meeting.

There isn’t a night when I don’t open the front door to look out west, in the direction of the mountains, without that picture coming to mind. I don’t go running outside in the dark, I go upstairs, but I remain optimistic that somewhere the curtain’s still going up, still revealing something new.

Or else going down the path from the old Montague Farm to where I parked my car after a long jaunt with the dogs in the morning of Memorial Day, wildflowers on both sides (see below). We had our walk, we’re going back home on a road we all know well to a red car we know even better, and still, there’s mystery lurking there, awaiting us at the bottom.

On our walk in the woods this morning we ran into a bear. It was the first I’d seen since the one who came into the yard in April, ate all the birdseed, broke three birdfeeders, then clambered over the fence and left. This hot morning the dogs ran down to the creek to drink, I followed slowly, turned around, and saw a black shape sidling past the bushes some 30 feet away.

Almost immediately I knew it wasn’t Aussie, not light-footed enough, the gait was sure and heavy. It walked up the slope smoothly and quickly. Hard to believe how fast they are, given how big they are. Henry ran over and I immediately leashed him. We both watched the bear, Henry’s eyes as big as the rest of his body, and he didn’t bark once. I’m sure the bear knew we were there, must have gone down to drink, registered our presence, and was scurrying up the hill in its own cumbersome way.

I decided not to go back but rather further into the woods, looking out carefully. Aussie joined us soon and we three made it to the pools that are the end of that walk. We stayed together, but the two dogs didn’t stop looking in the direction where the bear had disappeared.

I’ll admit that the thought flashed in my mind to fish out my telephone and try for a photo, but I didn’t. That’s the danger of blogs, you see. Something interesting happens and you right away think of the story you could write, the photo you could take. It’s the nature of the writer, but it takes you out of what’s happening. In your hurry to capture the moment in story or picture you forget the suspended breath, the wonder mixed with alarm at the realization that this moment, at least, you’re not on top of the food chain. Something way bigger, stronger, and wilder is in your vicinity!

Later on, when you get home, you tell Lori the story of what happened to you, and then you blog. But while it happens it’s not about you at all. It’s a meeting between you and the unexpected, the unknown, before civilizing human words ever enter the picture. You gasp, your heart beats rapidly and loudly even as everything else is still. You don’t think but you sense: Here it is! Here it is!

And you don’t mean the bear.