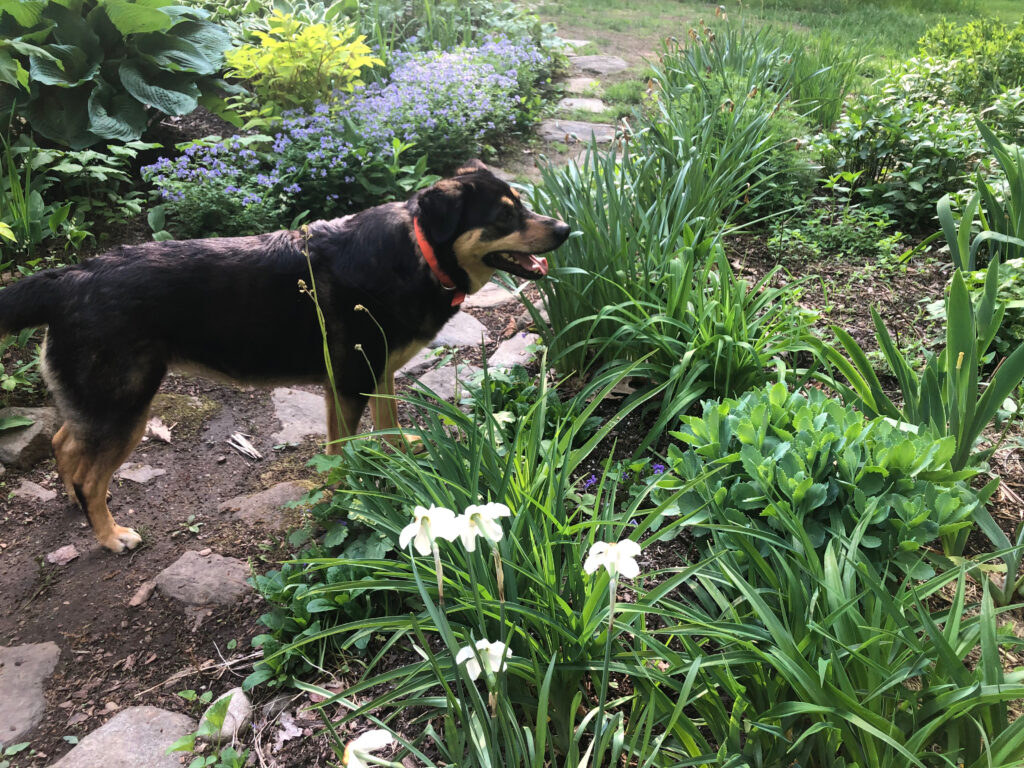 I am home. The leaves are out, as are wildflowers scattered in the grass. Spring in New England—new birth, new life. Purple and white lilacs reach for the sky outside my office window. They live and die quickly and soon, no complaints, no apologies.

As I take my daily dog walks, I think of Swapna Santhosh, my mother’s caregiver for almost 6 years. It was she who was by my mother that Saturday morning, at 6:30, when she died. She called my sister and brother, weeping hysterically: “Ima isn’t breathing! Ima isn’t breathing.” She was changing my mother, turning her around in the hospital bed, when a wide-awake Shoshana coughed a few times, took three long breaths, and left.

From the beginning, Swapna called my mother Ima, Hebrew for Mother. She wept more than any of us, not because she loved more, I think, but because her emotions were closer to the surface than ours with little standing in the way of their expression. She treated her as if Shoshana was her own mother. My brother told me that in the 7:00 am Jewish prayers that he led in the apartment, as is the custom in shiva, she would stand in the kitchen, behind the group of men, and murmur her own Hindu prayers on Shoshana’s behalf.

But Swapna is a foreign worker, as she’s designated in Israel, so she couldn’t just mourn. Israel treats the caregivers they bring in from India and the Philippines quite well. They have clearcut standards for salary, holiday and sick pay, as well as medical insurance and severance. Most important, they’re legal. But the rule states that if the person they care for dies, they are paid for one additional week and must immediately start a new job, otherwise their work visa expires.

That meant that even as she mourned my mother deeply, Swapna had to quickly find a new job. No family leave, no time to deal with loss.

Rather than waiting for an agency to deal with this, my sister talked to various visitors in the shiva about Swapna—there were lots of families who would want her services—and identified an elderly couple that didn’t live far. She vetted them, brought Swapna over to meet them, and helped her negotiate a salary. When the week was over, my brother drove her with her things to her new work family, assuring her that we want to stay in touch; we all want her to be happy.

Her vulnerability hit me hard. She’s been in Israel for 7-1/2 years, having left parents, brother and sister, husband, and small daughter behind in a small Indian town. Every Wednesday she wires them money. With my sister’s help, she mailed an enormous box of clothes back home. She’s supporting an entire family with her earnings and hasn’t seen them in four years. She’d planned to go two years ago, but the pandemic hit. This year she planned to go for August and September, but my mother died. That means she’ll have to negotiate her leave with new employers, who may not wish her to go to India so quickly.

With all of Israel’s generous benefits for foreign workers, when you scratch under the surface you see how thin the net is they rely on. No matter how well they work, no matter how loved and appreciated they are, the smallest change causes big disruptions in their life.

“Why do you do this?” my uncle asks Jennylou, his caregiver from the Philippines. At 83, he’s the last of his generation, and the minute he gets up from his chair Jennylou is at his elbow, making sure he stays stable on his legs, taking him wherever he needs to go, giving him his vitamins and medications, supervising long, daily walks, carrying with her everywhere a big bag with an extra sweater and supplies that he may require.

“I have two children in university in Manila,” she says slowly in English. “I also have aunts and uncles in northern province of Philippines, and I send them money.” She shrugs: “I sacrifice.”

They live in strangers’ homes and negotiate years, often most, of their lives in a strange land with no family and few, if any, friends because their families back home depend on their money.

Would I be ready to give my life to this? Would you?

I thought of Swapna when Jimena asked me for rent money for Claudia (not her real name), one of our immigrant mothers. She lives alone with her young daughter, but the daughter got sick and the mother had to give up her job to take care of her. That means no income. And since she’s illegal, no sick leave, no unemployment, no net to prevent a fall.

We make such big deals of the twists and turns of life. Messages abound about how much I need to take care of myself, warnings that this will take time, try not to work too hard, offers of food and meals. We read books about mourning and loss, attend bereavement groups.

Not so Swapna and Jennylou, not so Claudia. Nothing shields them from the blows. A baby gets born, they need to take care of her. Someone dies, they need to get another job quickly so that they could continue to support a family. No one to complain to, no therapist to help them process change, no layers of protection. They go on because life goes on, either with them or without.

We make things precious. They know life to be precious because they live it in all its rawness.

If you would like to support Claudia and immigrants like her, please make a financial contribution to “Immigrant Families” using the button below. Thank you.