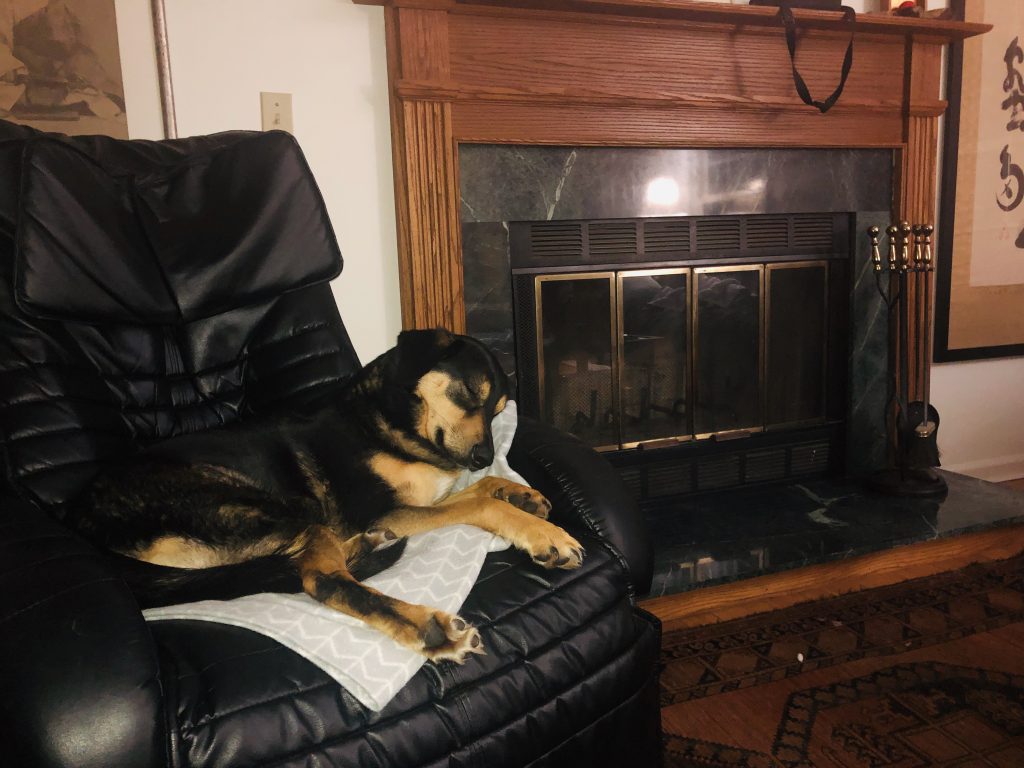 “Aussie, I’m going to be in retreat this weekend. Will you miss me, dog?”

“Dog limits who I am and what I can be. Dog does not describe the truth about me.”

“Oh yeah? What do I do with the marrow bone I just took out of the freezer?”

“I’m too fluid to be a dog! I’m a tiny dot on the broad spectrum of life; I can be anything I want to be. For example, I might want to transition to be a coyote.”

“Because we’re relatives. Coyotes and dogs share lots of genetic make-up. I like how they live in the wild and DON’T HAVE ANYBODY TELLING THEM WHAT TO DO. Ever since I was born, I’ve felt more like a coyote than a dog, hard to explain.”

“But you’re not a coyote, Aussie. Coyotes and dogs are very different systems.”

“I knew you wouldn’t understand. You want things to be black and white, always solid and consistent, filling your expectations of what it means to be a dog. You not only can’t think out of the box, you are a box. And you call yourself a Buddhist. Ha!”

“What’s Buddhism got to do it, Aussie?”

“I thought Buddhists knew the difference between life as it is and life as it’s described by words. Words are not life! Words can’t capture all the different variations and complexities and changes in life. Life is fluid and ever-changing, and I want to change with it!”

“Aussie, we need words to describe things to each other.”

“When you call me dog, you’re putting me in a prison! You expect someone with four legs and a wagging tail.”

“Speaking of wagging tail, Auss, where were you when I came into the house last night? Where was my greeting?”

“See what I mean? You expect me to be a dog, which means I have to jump up from my deep sleep, run over to the car, mewl and lick and slobber all over you.”

“None of which you did last night.”

“Because I don’t feel like I’m really a dog. Maybe I’m a wolf in dog’s clothing. A wolf wouldn’t welcome you back home, would it? Maybe I could transition to being a wolf.”

“Aussie, we haven’t seen wolves in this state for many years.”

“It’s all because of how you define wolf. Maybe rather than being a dog, I can be a variation of a wolf. A wolfette. A wolfauss.”

“Aussie, geneticists have developed highly detailed classifications of species, with criteria and categories for what makes a dog a dog and what makes a wolf a wolf. You’re a dog.”

“Okay, a not-so-thin dot in the infinite spectrum of life. I’m made of stardust, I can be anything I want to be.”

“I don’t want to be a tree. Trees just stand there. All my life I’ve had the feeling I was in the wrong body, that maybe I wasn’t a dog after all.”

“What gave you that feeling, Aussie?”

“Lots of dogs don’t like kibble, Auss, that doesn’t mean—”

“Aussie, Jack Russell Terriers don’t have a tail, so you could still be a dog—”

“I don’t want to be a dog! That’s the point, see? I have these deep feelings that I’m the wrong species, and you’re trying to persuade me otherwise. Feelings by their nature are not persuadable.”

“Aussie, humans and dogs share 84% of their DNA. Do you want to transition to be a human?”

“And have to go inside every time I take a shit? Or eat vegetables? No way!”

“Inside, I don’t feel that a human is what I really am. I don’t see becoming a human as part of the Great Potential. Transitioning into another species takes a lot of work, so if I do that, I want to become something I feel comfortable being, something that’s the real me.”

“I hate to tell you this, Aussie, but the real you is a dog. You were born a dog and you’ll die a dog.”

“The saddest sentence you’ve ever uttered. I will not be trapped by words or labels. None of us know who we really are in our essence, which means the sky’s the limit! Say, maybe I should transition to be a bird.”

“No, like the hawk with a big shadow on the ground that makes them shit in their pants.”

“Unless they transition to wearing pants.”

“This is a ridiculous conversation. What should I call you if I don’t call you dog?”

“Call me Glorious Inconceivable. If I’m inconceivable, no one can call me anything at all. No name, no prison.”

“Can I call you Aussie?”

“Only when dinner’s ready.”

“What about Henry? Can I call you Henry, Aussie?”

“Chihuahua is just a word, Aussie. It doesn’t mean anything.”

“Isn’t Henry a tiny dot in the great spectrum of existence? Isn’t Henry the very essence of Great Potential?”

“I have checked my feelings. Deep inside, I don’t feel like I’m really a chihuahua.”