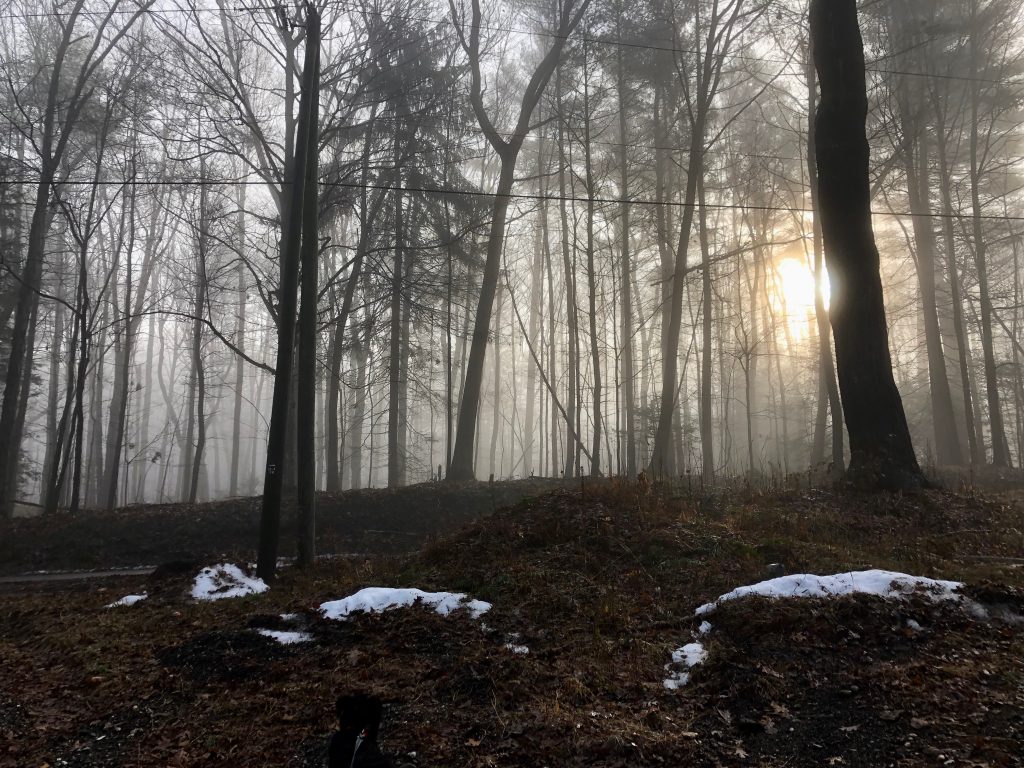 “Hi Chavale, where are you?”

“By my home, mom, walking the dogs. It’s a very cold day but the sun is shining brightly. It’s very pretty here.”

“Listen, you must talk to people.”

“Mom, there are no people here.”

“What do you mean, there are no people? They just leave you out on the street like that?”

“Mom, the reason there are no people here is that I walk in the woods.”

“You’re IN THE STREETS? People are letting you stand like that—IN THE COLD!”

“Listen to me. You can’t do that. You have to ask people for help.”

“Mom, I’m not cold. I’m wearing a warm jacket, the sun is out, things are fine.”

“Later things will happen and people will say: We didn’t know, you didn’t tell us, that’s why we didn’t help. So, ask for help and don’t let anyone leave you out on the street.”

We go back and forth some more and finally I give up and say: “Okay, mom, I’ll take your advice and do that.”

She’s mollified. She’s calm, her mind at peace. I stopped trying to convince her and instead shifted to: What can I say or do that will put her mind at rest?

You’d think that, with a mother in dementia, I’d have figured that out a long time ago. But the old habit of trying to persuade someone that I’m right and s/he is wrong doesn’t die easily in me; I have made a long career out of arguing. Again and again, I see that if I can let go of my ideas just a little bit and listen deeply to someone else’s needs and claims, perhaps something will arise that will take care of both of us.

It’s a long, tough road. Often, I’m reminded of Bernie’s teaching: It’s just your opinion, man! He expounded on it in his book with Jeff Bridges, The Dude and the Zen Master, but I think that for many people it sounded a little too dismissive, too lightweight, because it didn’t seem to address the pain and suffering that sometimes lie behind our stories, memories, and belief systems: I was abused, I was neglected, I was hurt and wounded; I went through trauma. What do you mean, it’s just your opinion? You call suffering an opinion?

I had a conversation with another teacher about the hatred many people voice for Vladimir Putin, and suddenly I remembered a visit Bernie and I made to Israel, Jordan, and Palestine some 20 years ago with the actor, Richard Gere. I hadn’t thought of this in a long time.

We met with people who held different positions and views on the Israeli occupation of the West Bank, including peace activists on both sides, Palestinians protecting their homes, Jewish settlers insisting that the West Bank was theirs, etc. Richard wanted to hear as many diverse opinions as possible. Finally, he wanted to visit with people who were responsible for terror activities.

At that time Hamas and Islamic Jihad sent suicide bombers onto Israeli streets to kill as many people as possible. When you walked on the streets of Jerusalem, it was common for people walking towards you to stare down at your waist to see if you were wearing a belt with explosives.

We communicated with various people about this, including the question of whether this would be safe. The answer came back that if we were actually invited, safety would be guaranteed because hospitality for guests was a basic Muslim principle; no one would invite you into their home and then harm you. After discussions and lots of phone calls, we were finally invited to meet with the head of Islamic Jihad in Bethlehem.

We had to leave our van and were taken into a car. At first, they refused to take me, a woman. I argued vehemently, agreed to cover my hair, and finally they let me in. I thought they would blindfold us. Instead, we went round and round the narrow, cobbled Bethlehem streets in twilight.

Finally, the car stopped by a small door dwarfed by very tall, ancient walls. Inside was a large rectangular room with couches on an old Persian rug. A short, bespectacled man sat there, our host. An elderly woman came in, his mother, and she brought us cups of sweet, hot tea and platters of dried fruit.

His name was Issa, which is Jesus in Arabic.

Now, years later, I hardly remember our conversation. No phone could be used, no notes taken, we weren’t to talk of this publicly. Given the cavernous old walls, I had the sense that we were very close to the Church of the Nativity.

Asked why he recruited and sent out suicide bombers to kill men, women, and children, Issa quoted the Koran. He was courteous, aloof, and held tight to his uncompromising beliefs and opinions. He also said that he knew he wouldn’t live long, it was just a matter of time before Israeli soldiers located him.

At some point, someone asked Issa what he would have done if he wasn’t with Islamic Jihad, if there was something else he’d wanted to do with his life, and he said: “Of course. I wanted to go to New York.”

“What did you want to do in New York?”

“I wanted to train to be a social worker and then come back to work here, in Bethlehem.”

Richard said that if he still wished to do that and could find his way to New York, he would help him to get that training. It would be a valuable service to bring back to the West Bank.

Issa said nothing; we all knew it was a pipe dream. Soon after that we got up, thanked him, said our goodbyes, and his people took us via a circuitous route back to our van. Some six months later I heard he was killed by Israeli soldiers.