We walked down a new path today. Veered off a well-known road that we’ve taken for a few years and instead followed an offshoot going further into the white hills. Of course, as we walked down the new path, we discovered additional trails veering off south and north, so I was again faced by the question: Do I stay on the path I’m on or do I go off?

Aussie peers down the snowy valley beneath us, body tensing. Something is there, she wants to run. If there were deer there, she certainly would. She’s tempted, her hair shivers, nostrils twitching, but she doesn’t run. I am her family and security, I represent food and shelter, companionship, security. Most of the time she stays with me, and sometimes she runs.

When do I stay, and when do I run?

Right now, I’m feeling a bit stale. I do the things I usually do, but don’t feel the rush of creativity in my bloodstream. The mornings don’t feel new (though we’ve had snow alternating with spring since the beginning of March); even the longer evenings that began on Sunday, with their gorgeous sunsets, don’t bring with them freshness and renewal. It’s as if I’m not exhaling thoroughly enough, so that my body contains old air and my life force feels weak and musty.

I don’t like these periods even as I know by now that they’re a natural part of one’s life, or at least of one’s creative life. Still, I want to do something about it. Do I go off my usual course? Where to? Do what? How?

Tomorrow in the early morning I’m in front of a Zoom screen with a small international group looking anew at the Rule of the Zen Peacemaker Order that was created towards the end of 1997, itself based on Buddhist precepts dating back 2500 years ago. Our job is to look at the Rule with new eyes and ask: Is this right for our life right now? How does this help us live both authentically and ethically? What strength and courage does it give us? What effectiveness to our work?

There are risks to going off-road. Yesterday, walking the dogs together, I asked Lori if, when she takes Henry out after finishing her work, she could include Aussie as well, thus relieving me of some dog-walking duties. She was a little tentative in her response because of Aussie’s tendency to run. I assured her I hadn’t seen Aussie disappear for a while in a long time.

We were walking on the road all together, and had we stayed on the road everything would have been fine. Instead, I had the brilliant idea of going off-road and following a loop in the woods down to the railroad tracks and then back up. We passed a depression made by deer in winter, three deer leaped out and ran, white tails bobbing, and Aussie ran off after them, disappearing for at least 20 minutes.

“Where were you?” she says, greeting us in front of our house as we returned. “I’ve been waiting and waiting.”

“Aussie, I hoped you’d be on your best behavior so that Lori could see how easy you are. Instead, you ran and failed the audition.”

Is the moral of the tale: Don’t leave the road you’re already on?

Often, I want to stay the course because that way I’ll finish something: the blog, the book, the project, the job. I’m not in my 20s or 30s, don’t have a big horizon of time ahead of me, and I worry that if I veer off-course too much nothing will get done. In fact, I’ve always admired people who basically stayed the course, did their thing, didn’t mix it up too much, and therefore had a body of work to show for their consistency and focus—books, paintings, songs, even a thriving sangha.

But we did go off the road this morning, and once we explore it for a while, we’ll probably go off the path again to look at the other trails, too. We know the comfort of stepping in footprints already made by other humans and other dogs. Been there, done that.

In the photo above, Henry’s wondering which way to go, but I have my doubts about the side where, other than a few footprints at the very start, the snow is untrammeled. Does it lie on top of an ice-covered pond? Lots of those in this forest. How do I know it’s safe? More important, how do I know it will get me back to the main road, the car, and finally home?

In the photo below Aussie’s looking down the new path. Henry’s run up ahead, but she stands and listens, then follows. That’s what I think I’ll do, too. 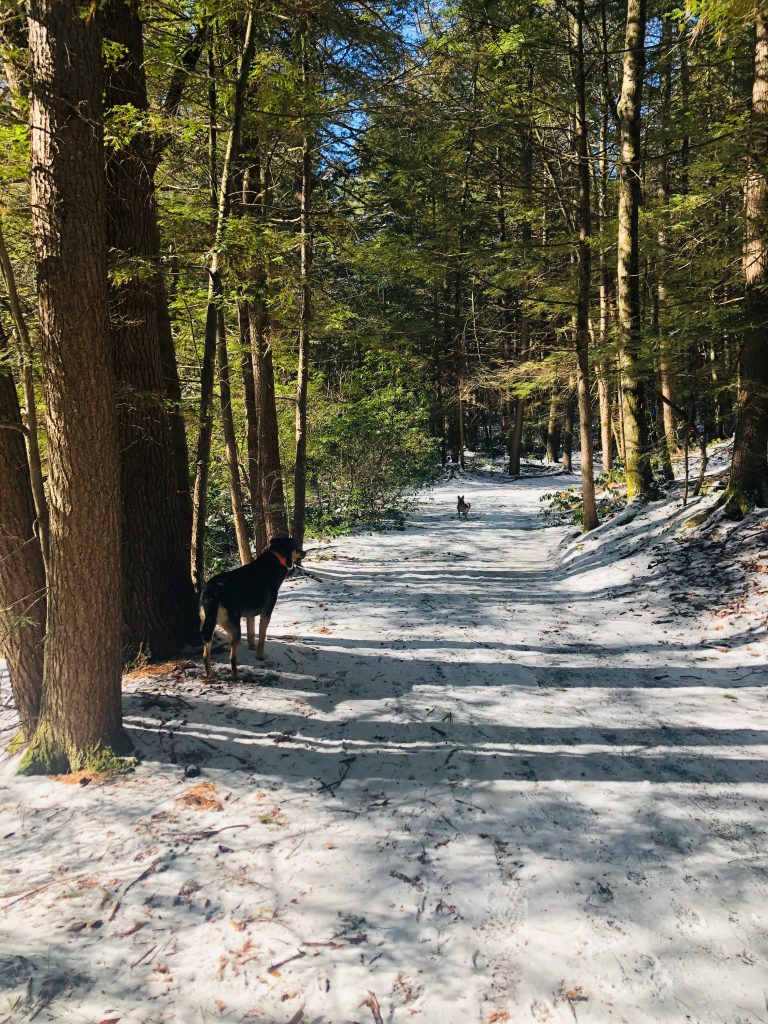