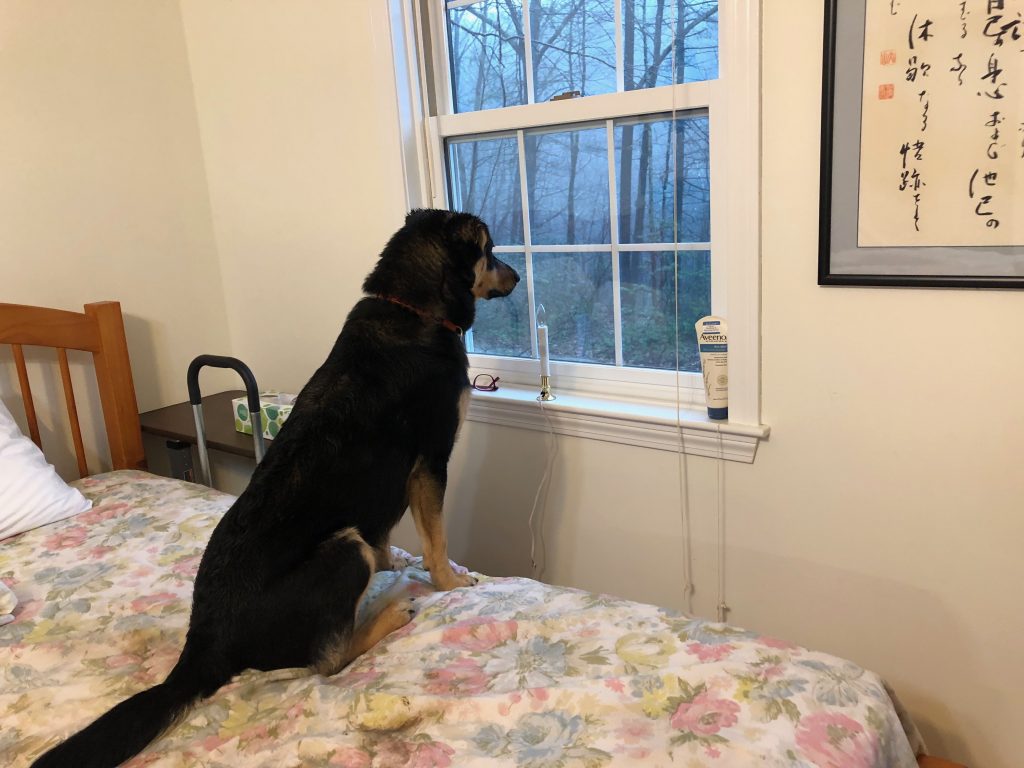 Aussie emerges from the enclosure behind Leeann’s house, accompanied by Leeann, and looks out at me dubiously. I am the last to pick her up from a group of about 10 dogs that Leeann and her husband take to the forested hills behind their home.

I’ve watched as Leeann brings out the other dogs. They see their humans and rush joyously towards them, a big family reunion. Leeann doesn’t bother leashing them even though she has chickens nearby; the dogs are so happy to get into the respective cars. They’ve had their games, their long walks and jaunts, and are ready to go home.

Aussie looks up at Leeann. “Why?”

“Come on, Aussie,” I call out, embarrassed that mine is the only dog that doesn’t want to come home.

“You’re my favorite human on the planet, except for the man at Mar-a-Lago. I want to go home with you.” With that Aussie heads to the front door of Leeann’s bright yellow house to make her point because Leeann, for some reason, doesn’t understand a word she says.

Aussie stayed with Leeann only once. After Bernie died, I stayed home for 49 days, with the exception of one overnight trip to Florida for his brother-in-law’s 90th birthday. Bernie wanted to go for that but died earlier. I went instead; the entire trip didn’t last more than 24 hours. After the 49 days passed, I flew to Israel to see my family, and Aussie stayed with Leeann. She’s sure that’s her real home, not mine.

“That’s my real home,” she tells me once I get her onto the back seat of the car.

“Are you telling me I don’t know my real home? What’s your real home?”

“Well, my real home is with Leeann.”

“Leeann isn’t the one who adopted you, Auss. Bernie and I found you in a shelter and took you home, not Leeann.”

“I was adopted by the wrong person!”

“My whole life would have been different if Leeann adopted me.”

“Leeann has her dog, Kaya.”

“Kaya’s old, she’ll die soon, and then I could take over. If I could have just lived in that house instead of with you, everything would be different. My whole life would have changed! But no, it had to be you.”

“I have to talk to somebody about how you raised me all wrong, how you didn’t take me on as many walks as Leeann—”

“How you keep your back turned to me and look at that dumb screen all the time.”

“How do you think I get the money to feed and house you, Aussie?”

“How you prefer Henry the Terrible to me.”

“I had a raw deal! It’s not fair! My life would have been so much better if Leeann had adopted me.”

“You know, Aussie, we spend lots of energy obsessing over how we grew up, what our parents did wrong, how it could all have been different if they were different, how much better our work and love life would have been. But I’m not spending any money on dog therapy, you cost me enough already.”

“I’m deprived! I’m abused! I’M UNHAPPY! Look at what you do for the Mexicans.”

“They’re from all over, not just Mexico.”

“You can do what you did for them, start a fundraising appeal. Call it Support Aussie’s Therapy Fund. Make a button for people where they could donate.”

“Of course I’m crazy, that’s why I need therapy. It’s all your fault. If you gave me more walks—”

“You get steak on your homecoming day.”

“That’s just once a year. I’m telling you, the stars were misaligned when I arrived. They switched babies or something, and I got the bad deal.”

“Aussie, listen to me. You want to be happy? Enjoy the life you have.”

“Chasing squirrels, toppling Henry, playing in the snow in the back yard, the walks and the treats and the soft, warm blanket you love to lie on.”

“Big deal! I’m a loser in the lottery of life. Quick, start that money drive. Support Aussie’s Therapy! Send in lots of money because I have lots to complain about. Years of it!”