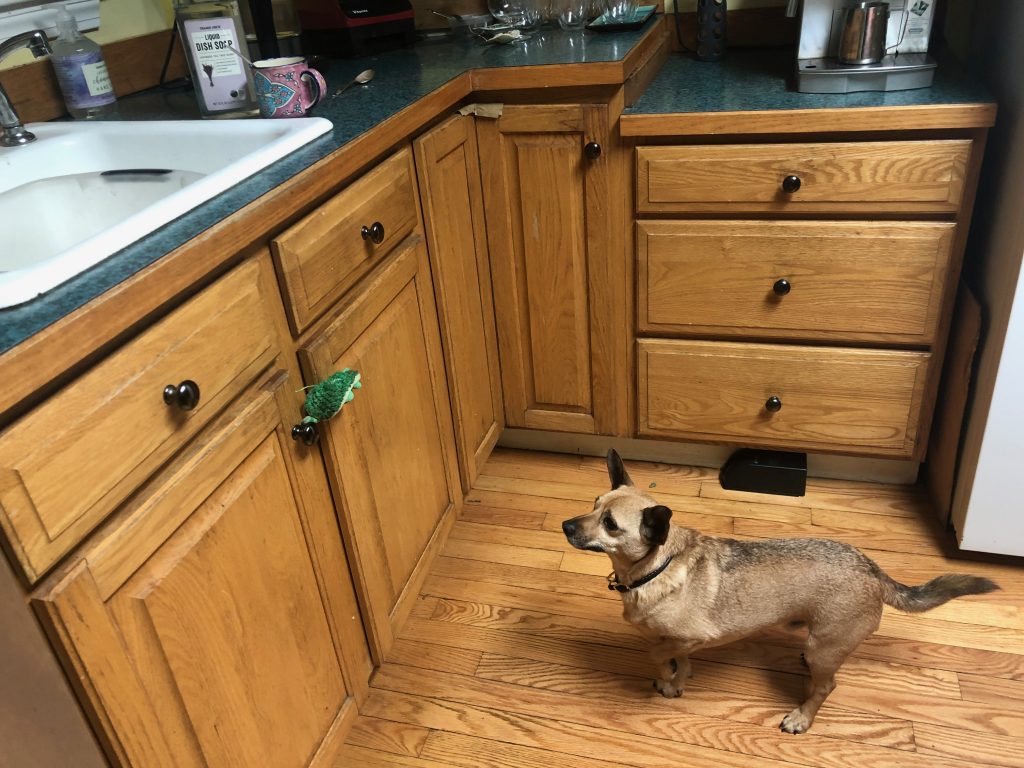 Wherever I am, Henry loves to bring Gertie, his stuffed pet turtle, for me to throw. I throw, he runs and fetches, and the routine goes on all day. First thing in the morning he rushes in as soon as the bedroom door opens (Lori tells me that he stays in his bed till he hears the meditation bell go off, at which point he leaps up and hurries to my door), and after a few obligatory but perfunctory hugs and kisses he runs to fetch Gertie, his true love, from his toy box, dashes back, and the day follows from there.

He also loves to put Gertie in a container, any will do. His favorite is when I open the dishwasher to put dishes in, and instantly find Gertie in the cutlery basket. Pick it up—throw—retrieve—and then it’s back in the dishwasher, this time inside a bowl.

His second favorite takes place the minute he hears me open the basement door, carrying a basket of laundry to hang up on the lines. I can hear the patter of small paws behind me, and as I hang things up, I find Gertie the turtle buried in my just-washed underwear or under my gray dog-walking sweatshirt. I pick her up, throw her, he runs to fetch her, and back she goes in the laundry bin to surprise me when I bend over to get my socks.

Every so often Henry, after fetching Gertie, shakes her up in an owner’s frenzy and tosses her into the air, and good luck where she lands. If I’m in the bathroom washing my face, you could bet she’ll land in the toilet bowl. The usual exclamations follow: “Again in the toilet bowl! That’s disgusting, Henry! I told you and told you, never in the toilet bowl.” I fish her out and wash her in the sink, put her back on the floor, and Henry happily licks off the water for the next 20 minutes.

I have found Gertie under black-and-white panties in my underwear drawer and under my pillow as I straighten it up for nighttime. She almost caught fire when he tossed her to the glass-encased candle that always burns on the Kwan-yin altar. I have found her a couple of times inside my boots and once in a bowl of soup I’d left on the table while I went to get a soup spoon. I’ve also found Gertie simmering in spaghetti sauce atop the stove.

It took Henry an entire day to figure out how to retrieve Gertie from the rocking chair in my room. She landed on top of the chair, and as he brazenly leaped up to fetch her, the chair, registering 16 pounds of weight up front, rocked forward and Henry fell back on the floor. He repeated this about half a dozen times, trying to outsmart the rocking chair, and finally sat back on his haunches, trying to figure out the relevant aerodynamics. By the end of the day, he worked out that by going at the chair sideways, he could squeeze Gertie out without the chair bouncing forward in ambush and throwing him back on the floor.

He’s fixated on burying Gertie inside containers or else tossing them the longest distance he can, usually hitting me in the head. In Zoom meetings, he’s tossed Gertie at the people on the computer screen, and now a few lay bets on whom he’s going to hit next. He reminds me a little of Tom Brady, only he ain’t retiring anytime soon.

“Is there a point to this story?”

“Because there’s no one quite like him, Auss. You could analyze his DNA all you want and find his matches in other dogs, and they’ll still be different. I never tire of noticing how unique each and every one of us is. You know what they say about snowflakes.”

“What do they say about snowflakes?”

“Each one is different from the other.”

“Fool me. You feel one, you feel them all. Snowflakes don’t got any personality.”

“Maybe if you investigated them a little, Aussie, if you paid attention, if you plunged into snowflakedom, you’d see some differences. Of course, you’d need a little patience.”

“There will never be another dog like Henry, Auss.”

“There will never be another Aussie, Auss. Do you fully understand what that means? One specific being that never was and never will be again, is just here this instant. Buddhism says that you change every instant.”

“Okay, it’s now a few instances later, and guess what? I’m still me.”

“Have not. It’s now the next instant. I’m still me, still Aussie.”

“But not the same Aussie you were before.”

“Aussie, even Gertie changes every minute.”

“Of course, she gets wetter and smellier from Henry’s saliva. Oh no, here they comes. I’m outta here.”

“Out the dog door. Time to meet a snowflake.”