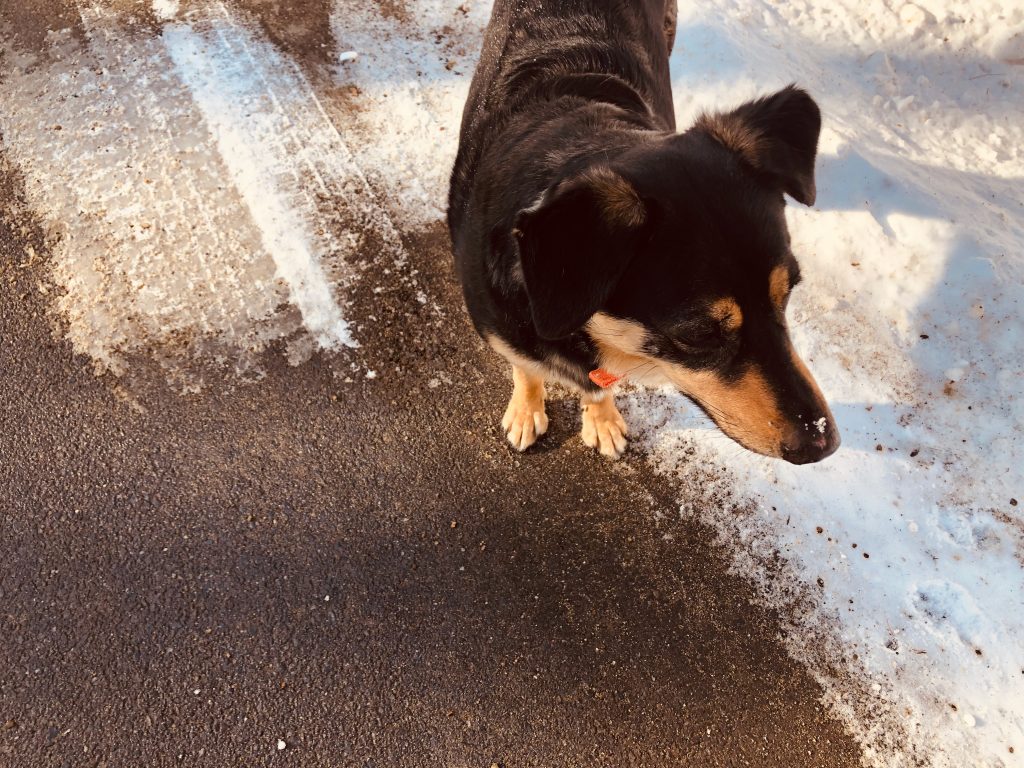 Lately, whenever I go out with Aussie in the frosty daytime, she returns home with a scraped up, red nose. It’s just a small scratch in the photo above, but yesterday she came back with a raw, angry laceration on top of her nose. It comes out of her scratching at the hard snow and ice because she wants to get at the life underneath.

I’m always moved by this passion to go after prey, to connect with some subterranean critter. It’s easy to skim on top of things and ignore the depths, but not Aussie; Aussie will go the distance with total focus and unadulterated joy.

Each morning I hear Henry the “mixed-up chihuahua,” as Aussie calls him, whining as I do my meditation in the bedroom, scraping at the door with his paw: Let me in! Let me in! And when I finally open the door he takes a running leap onto the bed, hops on his hind paws and pirouettes round and round, begging to be stroked and hugged. After that he quickly scans the room, searching for one of the many stuffed animals that litter our home, runs out to Lori’s bedroom to dig up Pinky the Elephant or the green turtle or red alligator out of his box of toys and brings one of them dangling from his mouth. He offers it to me to throw, which I do, he runs after it, and the day is off to its usual start.

You’d never know, from his enthusiasm and wild happiness, that we’ve started every single morning like this since the end of September 2020.

I ask myself: When did I become afraid to be so happy?

“Joy is not meant to be a crumb,” Mary Oliver wrote. Tell that to me, tell it to other humans. Dogs know that already.

Every day is full of invitations to be fully alive, to respond with joy, grief, exuberance, depression, and everything in between, and every day I back away. Or try to negotiate some middle course, like Goldilocks. Nothing excessive, nothing over the top. Just right.

When did I learn to be so afraid?

I have an old black file cabinet in the basement filled with ancient Zen Peacemakers files. I was told I could toss the files away, but being a paper recycling fanatic, I go through them to see what can be saved for printing purposes and what can be recycled.

I’m confronted by memories, pictures, and reminders of a shared past. Some are happy: Notes of an interfaith convocation we sponsored in Jerusalem 22 years ago with some 50 religious leaders, activists, and artists in attendance; peacemaker circles in various European countries; accompanying the great clown, Mr. YooWho, to Chiapas, Mexico, Bernie taking on an apprentice role (not something he was used to doing); blueprints of a Greyston AIDS center before it was built; lists of people whose lives happily intersected with ours over decades.

And then there are the less happy ones: Rejection by the Commonwealth of a costly application to build an alternative septic system for the Farm in order to protect the surrounding wetlands; unpaid invoices two and three months late; rejection by a bank to provide a second mortgage on the property; an angry letter from a disgruntled student.

Most were addressed to Bernie, and I’m always struck by how much stuff landed on his desk, the millions of details he plowed through day in, day out. His was not a simple life.

As I bear witness to them, I find myself sticking to a narrow stream of emotions. Not too happy, not too sad. Trying hard not to let my feelings fall off the side of the road.

We’re constituted to run against our limits all the time. Like the old story: Do I go to my daughter’s piano recital, or do I travel for a work meeting? Maybe there are beings in some universe that can be in two different places at the same time, but that’s not you or me. We’re faced with choices by virtue of being human.

Sometimes I decide easily, one alternative is clearly better than another. But there are times when both are important, helpful, even virtuous. What do I do when I come face-to-face with the impossibility of doing two things that are clearly needed?

I can face the edges and constraints of what it is to be human with humility and tenderness. But sometimes I start making excuses: It wasn’t that important after all. She wasn’t really a friend. Other people can help him, it doesn’t have to be me.

Looking through these files of so much work done over the years, so many good and bad times, I occasionally berate myself: Why didn’t I help more? I could have done more fundraising, I could have remained on the board, I could have been more available to talk and listen and help hold things together. He wanted that. But another voice reminds me of the alternative, because I also wanted to go my own way, do my own thing, teach, write. I couldn’t do everything.

So often I’ll hew to a middle course: Don’t get too nostalgic, don’t laugh, don’t weep.  Stay neutral, keep a little distant (it is past, after all), stay detached. Be cool.