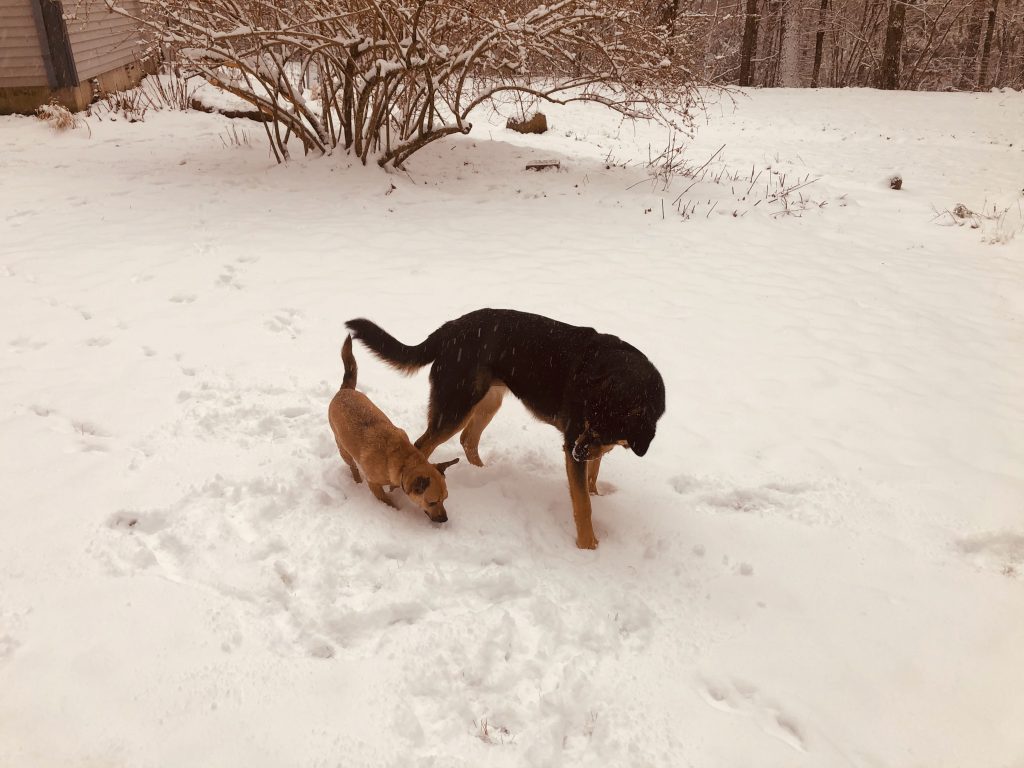 “Guess what, Henry? It’s National Squirrel Appreciation Day. Let’s go appreciate them, what do you say? Are you ready? On your mark, get set, GO!”

“Missed it! Aussie, you almost crashed through that door. The Senora wouldn’t appreciate that much.”

“Hey Aussie, what’s the matter with the Senora? She walked us back home and didn’t even look at us. Not one treat out of those big jacket pockets.”

“Big deal, they’re gluten-free. Ugggh! Besides, why is everybody blaming me whenever she’s in a bad mood?”

“Something must have happened. What do you think happened?”

“Who knows? That’s something you should understand, Henry. You never know anything about the Senora, as you call her. One day she’s happy, one day she’s not. Humans are like that generally. Everybody knows that except you because you ain’t too bright.”

“Maybe she’s mad because you disappeared for such a long time when we walked by the beaver dam.”

“Aussie, you were gone forever! You leaped over the frozen river, ran into the trees, and that’s the last we saw of you.”

“There are also coyotes, Aussie. Bands of them. I think the Senora worries about you. She was so relieved when you came back.”

“Oh yeah? Did she give me any treats? Did she reward me? It’s common knowledge, silly dog, that when dogs come back from running away, they get treats. That way we make sure to come back, see? We associate good treats with coming back. That’s Dog Training 101, Henry. Human training 101, too, because some of us know how to take advantage of that.”

“I love the Senora, Aussie!”

“Try not to, Henry. Love always brings disappointment, never fails. I’ve been in love with humans many times and look what it’s got me. A freezing January with river ice, Squirrel Appreciation Day, and a Chihuahua for company.”

“You’ve been in love with humans before, Aussie?”

“One in particular, Henry, the most beautiful of them all, the kindest, sweetest-smelling of them all.”

“Don’t be daft. The love of my life is Leeann. My Leeann, who takes a whole group of us out into the mountains, with the best raw meat treats in her pockets. She keeps everyone in line, but I’m her favorite. Maybe when her dog Kaya goes to the great dog park in the sky, she’ll adopt me instead.”

“What happened to Leeann, Aussie?”

“She went to St. John’s for the month. I hear it’s warm there. Another human that’s broken my heart.”

“What about the Senora, Aussie?”

“She wants us to have a relationship, Henry.”

“Don’t you already have a relationship?”

“I sleep with Lori, Aussie. I sleep in her bed and it’s awfully sweet.”

“It’s not a matter of love, Henry. Humans want to get close to us because we make them feel young.”

“Is that so terrible? They feed us, they walk us, they take care of us, and all they want in return is for us to make them feel young. Is that such a bad deal?”