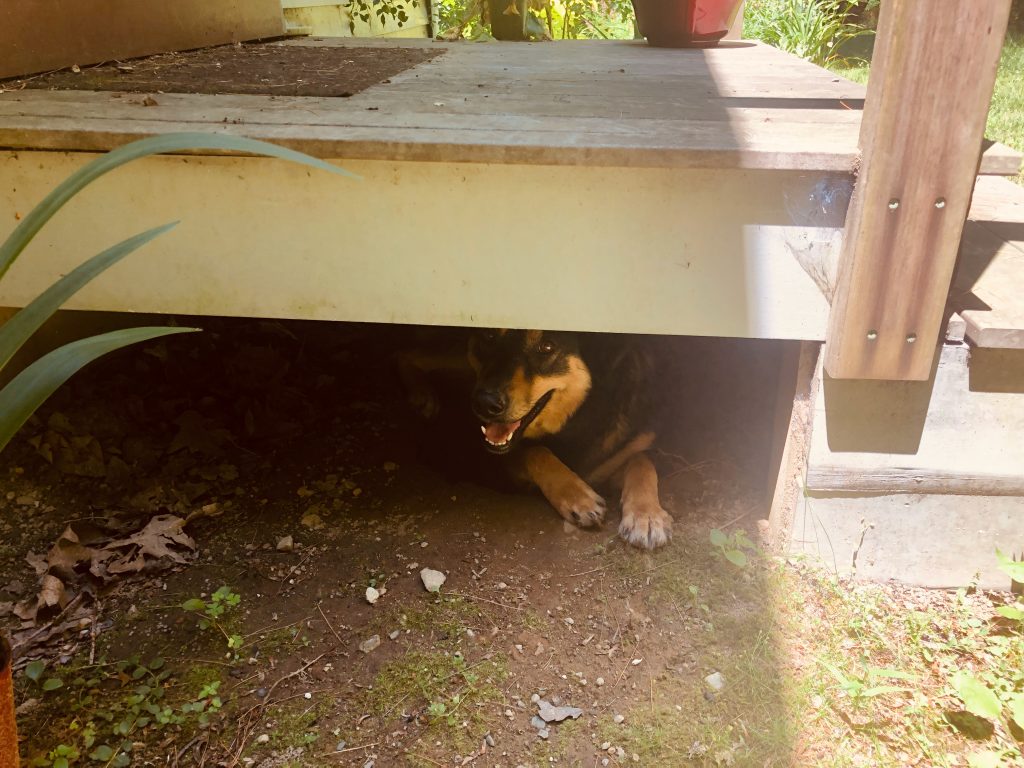 “Aussie, guess what you are.”

“The smartest dog in the world?”

“The cleverest dog you’ve ever had? The best hunter, the sweetest companion, and the most ferocious guard dog ever seen?”

“Not even that, Aussie. Your DNA results came in, courtesy of a gift we received from Lori.”

“No, Auss, but they did track the different dog breeds that make up Aussie. See?”

“First, Aussie, almost half of you is a herding dog, a German Shepherd. Herding dogs like to control the movements of other animals.”

“And people. I’ve been controlling your moves from the day I came into the house.”

“The German Shepherd is particularly known for courage, athleticism, and intelligence.”

“But that’s just half of you, Auss. Another quarter or so is Chow Chow.”

“No, because you’re Chinese.”

“I am not! Do I look Chinese to you? Do I have those weird-looking eyes that seem half asleep most of the time?”

“Aussie, Chow Chows used to pull carts in ancient China. They were also used as food.”

“Don’t even think about it!”

“Don’t worry, Auss, if I ever consider eating you, it’ll only be a quarter.”

“I don’t think I like this DNA thing. Do any of these labels begin to describe what a unique, elegant, arrogant, good-humored bitch I am?”

“So what good are they?”

“Forget about it. Too dangerous and the pay’s not good.”

“About 10% of you is Hound, like Beagle and Foxhound. That’s the part that goes after prey.”

“Always knew I’m the greatest hunter that ever lived.”

“But here comes the bad news, Auss. Ready for this?”

“You also have some Terrier in you. Guess what kind of Terrier? It comes from somewhere down South.”

“No way José. Nothing, but NOTHING about me is remotely like Henry. I’m not short-hair, I’m not small, I’m not illegal, and I don’t talk Mexican.”

“Aussie, some of what makes Henry Henry is in you, too.”

“Some of everybody is in all of us, and some of us is in everybody.”

“I can deal with the part of me that’s Spencer the dumb old Golden or Ripper the silly Pug. But not Henry, never Henry!”

“Look at it this way, Auss. Since he’s a relative, you probably won’t ever get married.”

“Vomit! Vomit! What about Donald Trump? Is part of him in you?”

“Probably. Unfortunate, but so. Forget about all this, Aussie. You’re right, all the DNA analysis, all the breeds in the entire world don’t come close to capturing who you really are.”

“I’m beyond labels and categories.”

“Just look into my eyes. Can you, a writer, pin me down with a word? A name?”

“That’s why you’re my best friend, the only human who’s ever understood me.”

“Actually, Aussie, only 1% of you is a companion dog. American Eskimo.”