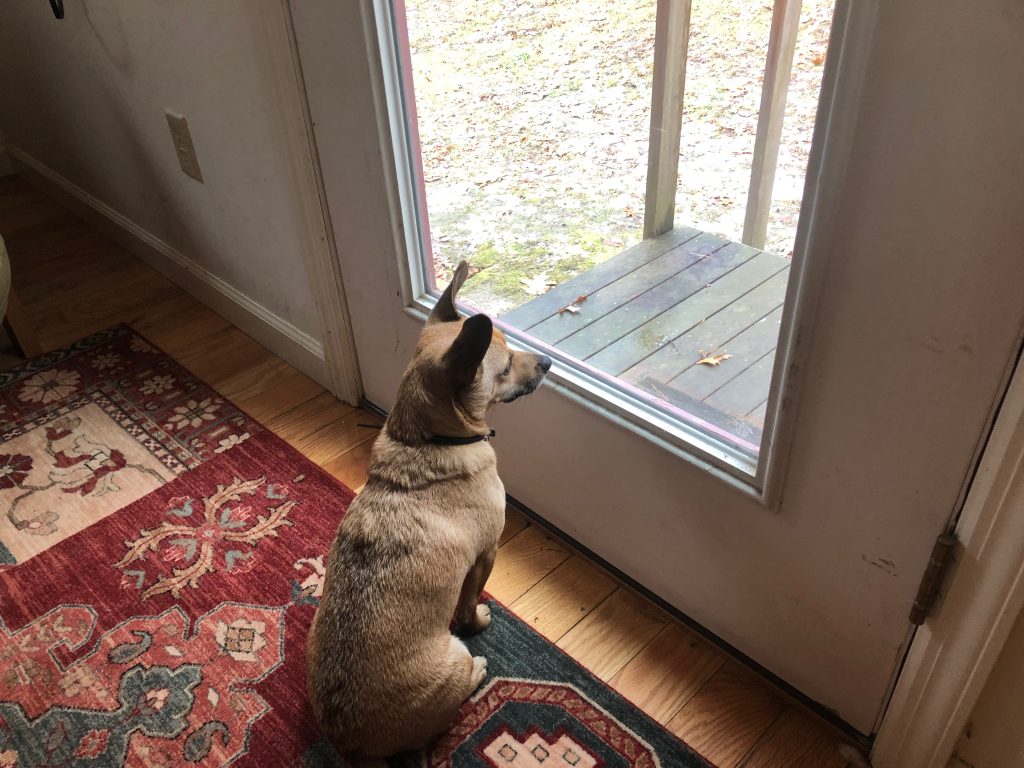 Henry is not well.

Yes, I know he’s a Chihuahua, a foreigner, and Aussie says she doesn’t want to have anything to do with him. But in truth she likes his company on walks. Lately he hasn’t come with us, he shakes and shivers on his paws, and it’s not from the cold. When he does come, he can’t run around like her, chasing after animals, pursuing smells. Instead, he stays with me and whines sadly, waiting for her to rejoin us.

We don’t know what it is. For a long time, the diagnosis was kidney trouble and Henry’s been on a special diet. Now they’re looking at his back. He’s in pain and doesn’t eat much.

But today he played all morning and afternoon with Croc, his green stuffed crocodile, and Pinky the elephant. Even now, as I try to focus on the computer screen, he tosses his small green turtle onto my lap with a soft snarl and waits for me to throw it so that he could fetch. Or else he sits by the glass door of the office and stares out at the squirrels trying to hijack the birdseed.

In Thanksgiving we took out the birdfeeders. Three out of four seasons I don’t feed birds, but comes winter, the ground freezing solid, I fill up five birdfeeders with sunflower seeds (I buy 40-pound bags of them) and up they go, consumed in no more than two days. The squirrels monopolize one for sure and attempt to get at the others, with varying degrees of success. This brings new activity to the back yard and Aussie and Henry dash out the dog door a dozen times a day, on the hunt for marauding squirrels.

Some people try to get squirrel-proof feeders; I don’t. Comes the cold, dark winter, I want to take care of people and animals, including me. Want to tend to the universe. Come April, trees grow new leaves, plants leap up from the ground like Marines and flowers straggle up shyly from the underworld. Life seems to do just fine without help from me. But in winter things seem more fragile, more tender. They need to be tended to, like Henry.

Given all this, imagine my surprise when this morning I found myself reluctant to go out to Kwan-yin in the back and do service with incense, imploring her for compassion on behalf of people who’re ill or need help. I thought: Enough, enough. I did put on my boots, went out and left a stick of incense in the soil, a tiny offering to this great sustaining earth.

But I was puzzled that I didn’t wish to do what I’ve done for years. Was it just one morning’s impulse, or is something else coming up? And why now, at the very time that calls for more giving, more tenderness?

I remember seeing Bach’s St. Matthew’s Passion at the Brooklyn Academy of Music some 30 years ago, directed by Jonathan Miller, one of England’s great theater directors. I traveled down from Yonkers with a friend. I’d never seen the Passion before, didn’t even know the music.

Of course, I knew the story of that Last Supper, the betrayal of Jesus, the Garden of Gethsemane, the Roman soldiers coming to get him, sentenced by Pilate to a terrible death, the crucifixion at Golgotha. And, of course, the resurrection would occur at the end. At least, that’s what I thought.

But St. Matthew’s Passion had no resurrection at the end. It showed the entire story through his death and ended with the body being taken down and the tomb sealed.

There was applause, followed by people getting up from their seats to leave the theater. I sat there alone, waiting for the resurrection. Finally, the friend with whom I’d driven down, who sat in a distant seat, came to pick me up, wondering why I hadn’t met her in the lobby as we’d planned.

“What about the resurrection?” I asked her. She was Christian and a musician. If anyone would know, she would.

“There is no resurrection in St. Matthew’s Passion,” was the response.

I couldn’t believe it. The next day I bought the CD and listened carefully, following the English translation in the accompanying Notes. And no, there was no resurrection. No triumph in the end, no victory of good over evil, day over night, gladness over despair. The Israelites didn’t win it over the Egyptians

What there was, was tenderness.

Maybe that’s part of this winter for me, or the winter of my life. When you’re younger you want to win. You want your values to triumph, mercy and compassion to cross the finish line. The world may falter, but the resurrection is inevitable.

Maybe. There’s a lot to say for waiting things out. No prayer for a particular outcome, just breathing in and out together with the rest of the world.