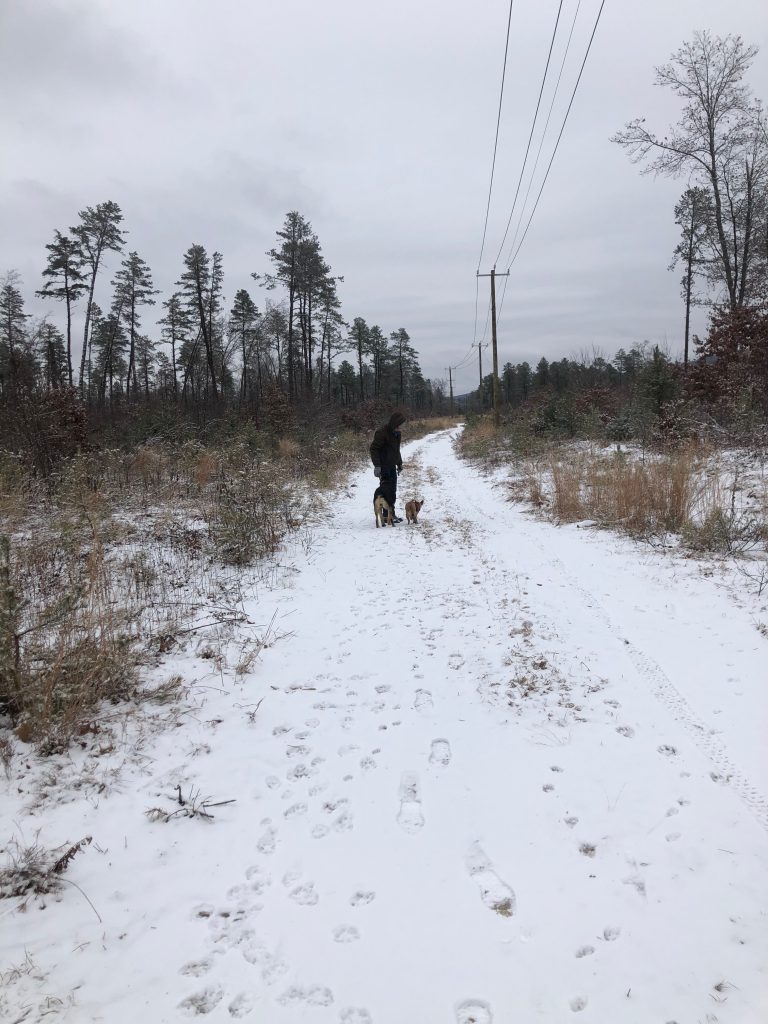 I’m back home, as the photo above suggests. Dusting of snow last night. Lori and I walked the dogs this Christmas Eve morning, Aussie in high spirits, Henry the Chihuahua shaking and trembling in the chill. Two dogs experiencing the moment so differently.

I had a hard time getting out of Israel. A few days before I was scheduled to leave, the prime minister announced that models indicate a severe surge of the omicron variant three weeks hence, so the government was taking radical measures, one of which was restricting travel in and out of the country. In essence, no one could fly out to a Red country without getting a special exemption.

The US was declared Red 24 hours before my scheduled departure. My sister helped me file an online application for exemption, but no answer came. Later I heard that they got so many applications that their systems crashed.

“I don’t care,” I told her. “I’m going to the airport and getting on that flight.” Last May I hadn’t been able to get home due to the war with Gaza; I was pretty determined.

My brother took me to the airport some four hours early. Once there, I was directed to a special office on another floor that was handing out exemptions and found myself on a line of some 200 people trying to get home, converging on a counter, behind which sat two middle-aged, harried women. Their computers were down and they were doing things manually.

At first there was a line, but as it lengthened, it widened, too, and soon disintegrated completely. Most passengers were like me, waving American passports and demanding to be allowed to board the plane. There were also a few with other needs—unvaccinated passengers, people with only an Israeli passport wishing to leave the country, etc. They pressed their case and took up lots of time.

As minutes, then hours passed, we became a mob, pressing and pushing against each other, straining to get to the counter. I could feel the pressure against my back, padded by my backpack, could hear one of the women on the phone screaming for help, saying there was a mob out there and where was a representative from the Health Department?

A heavyset Russian man yelled behind me: “WHAT’S WRONG WITH THEM? WHAT KIND OF DUMBA—F—S are they!”

At first, I responded mildly. “It’s the first 24 hours after the new rules and they’re clearly unprepared and understaffed.”

“AND WHAT’S WITH THOSE CRAZY HASIDIM?” he shouted. “THEY ALWAYS WANT MORE THAN ANYBODY ELSE!” He was referring to two orthodox young men in their black suits, side curls, and hats, who took a half hour to get their case resolved.

As time passed I, too, got carried away. The United flight was going to leave without me—how dare they? I, too, yelled at the woman behind the counter. I snapped at the slender, young, uniformed man quietly pushing his way ahead of everyone else, explaining that he was taking care of two VIPs, a father and son, who needed special assistance.

I didn’t say “F— THEM!” but I might as well have. Instead, I exploded: “I’m standing here for the last two hours, and they get special assistance!”

I blamed him, blamed the two overwhelmed women doing their best with no functioning computers and no help, facing a crowd that got angrier and more aggressive by the minute. The outrage felt so good! Indignation! Moral injury!

I got to the counter, filled out a form, threw down my passport, the woman copied the form, stamped it, returned it to me, and it took a few minutes to fight my way out of the roiling throng.

Had another angry exchange with the United ticket agent who wouldn’t accept the form (“Their computers are down; this is the best they can do!” I had to repeat repeatedly even as she insisted otherwise), and finally found myself in a narrow Economy window seat of the plane, ready to take off. In the peak of the Christmas holiday season, when planes to and from Israel are full of tourists and Christian pilgrims, the flight was ¾ empty.

And felt ashamed. Wished I’d been more patient, more gracious, more grateful to the two women doing their best. Wished I’d had an Order of Disorder clown nose on, bringing levity and smiles to the angry crowd. I thought: Now I know what it’s like to be part of a mob. Not a lynching mob, but livid and abusive.

I don’t describe this out of guilt. This is hardly my only episode of outrage and indignation; I’ve had a number of these in my life. If I’d thought it was behind me, I found out it wasn’t, but that discovery wasn’t much of a surprise.

We get caught in the net of gain and loss; we fight tooth and nail, but loss is as much part of life as everything else. In the end I will lose a lot more than a flight home. I’ll probably lose my mom just as I lost Bernie, I may well lose other family members and friends, the use of parts of my body, the energy I treasured, finally this life form. Do I really want to be outraged every time that happens?

“Aussie lay on your bed the days you were gone,” Lori told me. “She wanted to be with your smell.”

The smell probably faded after some days, and still she lay there. She didn’t kick and scream, didn’t yell that life isn’t fair and curse the universe. She lay there till Lori called her for a walk or food, and then, tail wagging, she’d go downstairs.

She’s better at impermanence than I am.

I had a dream last night, jetlag and all. I dreamt that I met Donald Trump and we became friends. He made thoughtful comments and listened; he’d become humble. I brought him to a group I was working with—Latino immigrants? Families with no homes? The dream wasn’t specific about that—and he listened to them and made simple, practical suggestions. He cared.

It’s the night of Christmas Eve now. I wish us all more patience this coming year, a larger compassion, a wider door to our own beating heart.