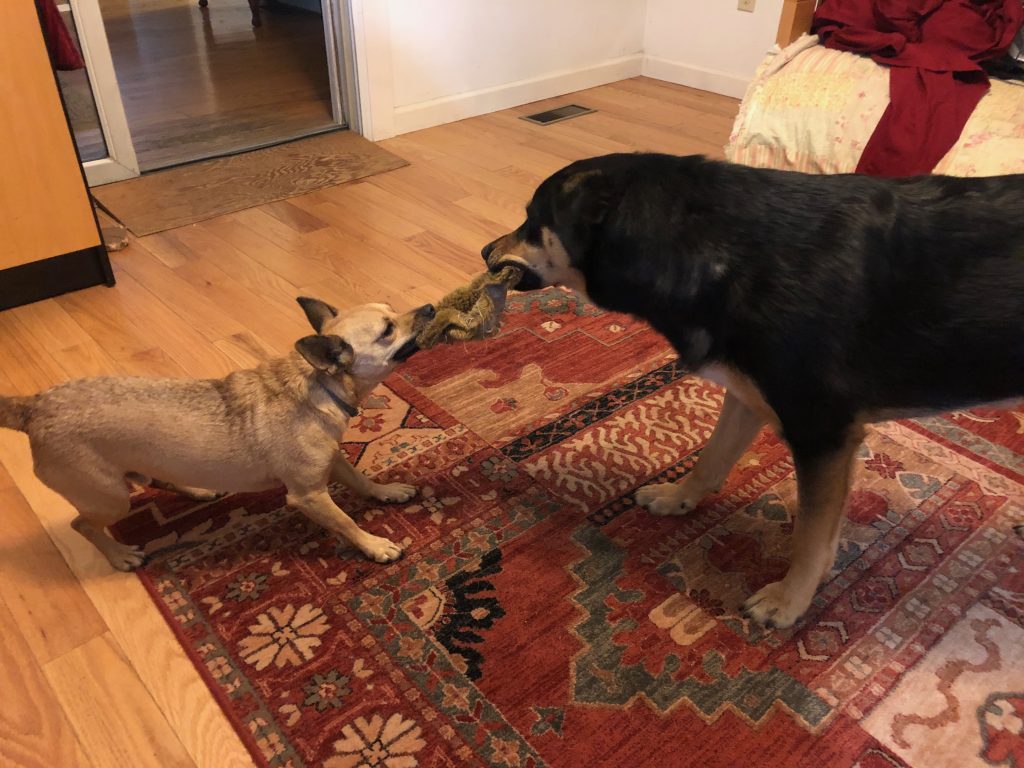 “You know, sometimes I think that you love Buddha more than you love me.”

“Now, now, Aussie, you don’t have to be jealous. Buddha is you, so there’s no problem, see?”

“They don’t usually call me that, either, but Buddha is me just like it’s you, Auss.”

“For a person who tries to be clear, you can be awfully confusing.”

“You know how I went to the Emergency Room yesterday, Auss?”

“Is that where you were most of the day? Did you even think about me?”

“I didn’t have to, Aussie, Lori fed you and walked you. I had to go because I’ve had lots of painful spasms in my lower back, so I finally went to the ER and they did all kinds of tests.”

“They don’t have one yet. I saw the doctor today and we think the CAT scan revealed a herniated disk. I’m now on serious muscle relaxants and pain-killers.”

“Who knew cats could do all that!”

“When you’re in the hospital, Auss, everybody wears masks, see? I was seen by a few really nice nurses wearing masks, but the ID they were wearing—”

“A laminated card that identifies them.”

“The nurses wear a card that identifies them as hospital staff and shows their photo. And these nurses were very pretty in the photos, they had beautiful faces, only you couldn’t see those beautiful faces behind the masks, see?”

“If you smelled them you could.”

“The point is, Aussie, you’re Buddha, I’m Buddha, everyone is Buddha, but when we wear masks they can conceal who we really are.”

“Everyone and everything is Buddha?”

“If Henry and Ruby are Buddhas then I don’t want to be Buddha.”

“Listen, Aussie, Buddhists can be a club, but not Buddha. Buddha is everywhere, bright and clear, but we miss it on account of all those masks we wear, just like it was hard to see how pretty those nurses were.”

“Since I never wear a mask I’m always beautiful.”

“When Henry tries to steal my food and I almost kill him, are we still Buddhas?”

“And you call this religion?”

“You know, Aussie, in the Hebrew Bible it says that God created human beings in His image.”

“Why His and not Her? Or It? Or They? Did God add pronouns to His name?“

“What good is an image that’s invisible?”

“Aussie, you should be a Talmud scholar.”

“If I use the language of the Hebrew Bible, I could say that God created everything in His/Her/Its/Their image, see? Not just humans, also dogs, chipmunks, leaves, stones—”

“What’s with your obsession with Henry the Chihuahua, Auss?”

“Some people worry about how God could make Hitler in His/Her/Its/Their image, I worry the same about Henry.”

“There’s one thing that permeates and manifests everywhere, Auss. When we take off our masks we can see it. Or smell it. Or hear it. Whatever.”

“Let me ask you something about those nurses. You know the IDs they wore? Did they say their name was Buddha?”

“No, Aussie, the IDs carried their own names.”

“And their name wasn’t Buddha, right?”

“Of course! What good would it do to call all the nurses Buddha? You wouldn’t be able to tell one from the other.”

“For daily life we need to distinguish, Aussie, but—”

“And when you came into the hospital, what name did you give them?”

“And what was the doctor’s name? Dr. Buddha?”

“Aussie, you’re being silly. And why did you just go after Henry?”

“Because he wants me to call him Henry Buddha Chihuahua. Watch me kill him!”