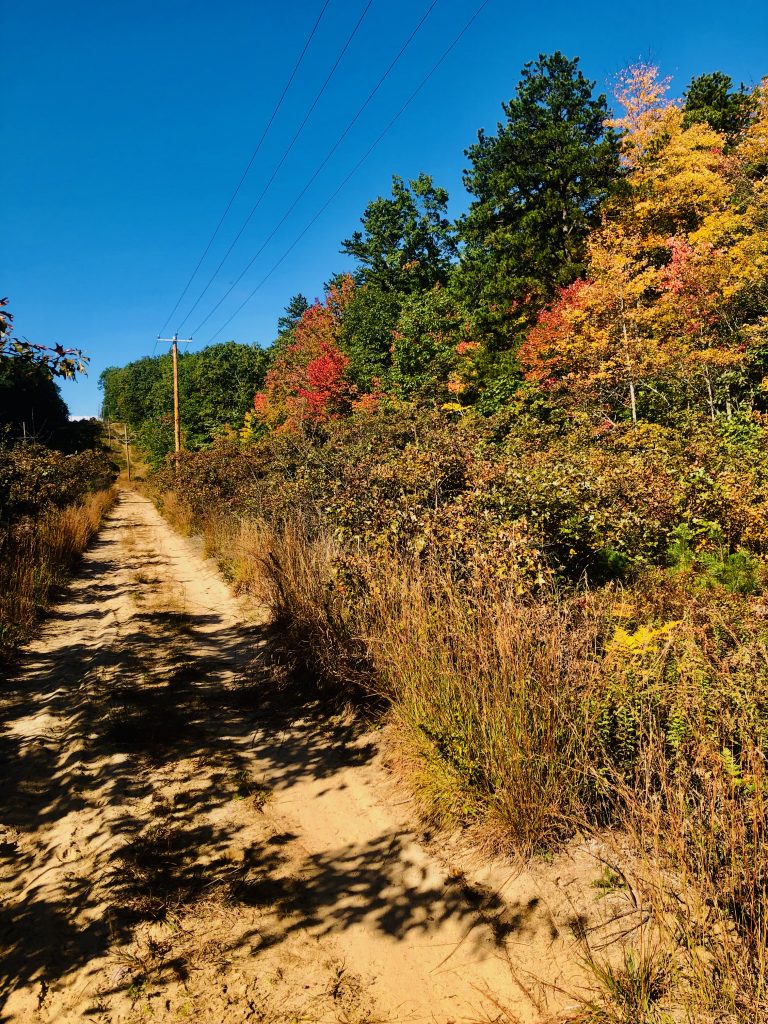 Aussie and I walked by ourselves down an unfamiliar path. The leaves are changing color and lots of squirrels and chipmunks crisscrossed right in front of us, giving Aussie lots of exercise. They’re busy stocking up for winter even as the trees drop their leaves, stocking down, so-to-speak.

Lori and Henry came home 10 minutes after we did, Aussie growled the minute the front door opened, I said What’s going on?, but Henry knew perfectly well and he hurled himself at her neck, leaping so high he almost soared clear over her back. She chased him down, cornered him on the rug and put her jaws around his little head. I winced and almost called her off, but she released her jaws on her own so Henry instantly hurled himself at her neck again, as if saying: Do it again, Aussie, do it again!

I opened the door and told them to take it outside, which they did, chasing each other back and forth around the yard till Lori started making Henry his supper, at which point both ran into the kitchen because Aussie gets little cheese treats during the meal prep for Henry. After Henry ate he brought me his blue and orange ball to throw, which I did, he brought it back, I threw it again, and the setting sun threw one last golden light on golden leaves. You get the picture: cacophonies everywhere.

When I did my retreat with Franziska Schneider in Switzerland, the retreat center had no in-house cook so Franziska hired Marianne, an outside cook, to provide the meals. We had simple and  tasty food throughout (with the exception of the concluding lunch, when Marianne offered in one meal all the starches and sugars that she didn’t give out during the rest of the retreat). There were some two dozen different dishes in that final lunch, including 4-5 desserts.

Throughout the retreat Marianne, with a big smile, would announce during each meal what the food offerings were. Two people always had to help clean up at the end and I would hear Marianne giving instructions in a loud voice, giggling and laughing, and the people helping her would then also giggle and laugh, raunchily calling out to her, having way too good a time.

The strict Zen teacher in me grumbled inwardly. In Zen retreats the position of the cook is very important, and the job of the cook isn’t just to make sure that meals are ready in the prescribed hour but also to maintain a retreat atmosphere in the kitchen, keeping everyone focused and quiet, fully concentrated on what they’re doing.

That was not the atmosphere in the kitchen. Marianne was irrepressible.

Towards the end of the retreat, Franziska broke the silence to thank Marian for the wonderful meals. Marianne replied in kind—and replied—and replied. She couldn’t stop talking. Later I was informed that she told us we ate a lot.

I sat close to her during this exchange and watched her face. I didn’t understand a word she said (all in Swiss German), and this freed me to watch her more carefully. She was a middle-aged, slim woman, short black hair, with big dark eyes behind round, schoolmarm glasses. She talked animatedly, a big smile splayed across her face revealing small, white teeth, giggling and laughing just as she had throughout her time in the kitchen.

I was glad I’d never gone into the kitchen and asked her to take things down a bit. I thought about the big urge we have to express ourselves, this life form, this individual dharma, whatever it is—right/wrong, follows the rules/doesn’t follow the rules, loving, hating, stiff, wacky—all those different ways of being seeking expression all the time, not as hungry ghosts but as vibrant expressions of life, no different from the bells around the sheep and cows, the gurgle of the brook, the silent, graceful falling of the leaves, Henry throwing himself at Aussie—so much diversity, so much lusty expression.