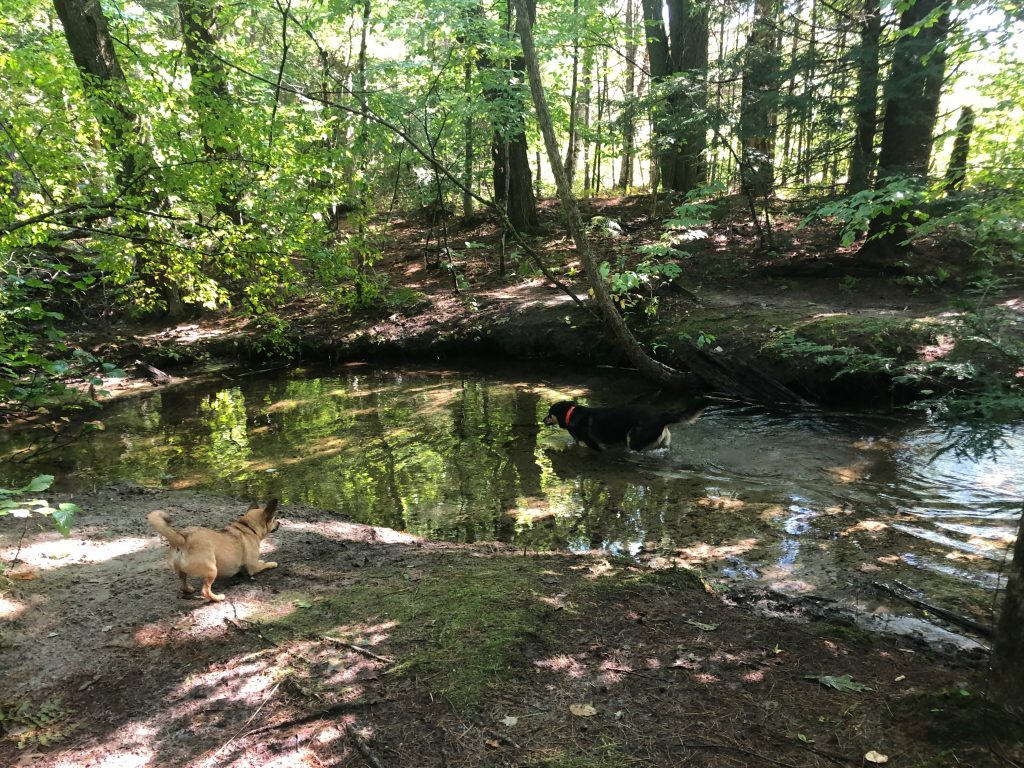 Aussie’s in the water, Henry’s not. He goes into his stalking stance, belly down on the grass, hindquarters up, begging for her attention.

Aussie stands in the middle of the stream and won’t look at him. Looks everywhere else, just not at Henry.

At some point she may suddenly make a fierce dash out of the water and up the bank where he’s standing, he’ll give out his small, ferocious snarl even as she runs past him, and joyously try to catch up. And sometimes she’ll just turn and run up the opposite bank, leaving him to go back around and over the log bridge that’s suspended over the water, then hurry to catch up with her.

He’ll counter her smarminess by playing with the rat terrier Ginger ten minutes later, more his size, while I leash Aussie to prevent her from growling at Ginger for playing with Henry, who’s clearly her toy. But when it’s just the two of them they have their protocols, the dance they’ve perfected for almost a year now. Here are the rules:

2.  If there’s a mole hiding underground and it’s time to dig, Aussie does the digging while Henry growls and supervises.

3.  Aussie always runs first and Henry follows. And if it’s deer they’re chasing, Henry will run for about 100 yards and then turn back, while Aussie will disappear for half the day.

5.  Seating arrangements in the car are fluid. At the start it’s Aussie in the back seat and Henry on the wide armrest between the driver and passenger seats. After a minute or two, Aussie nudges him aside and comes down on her belly, hind legs on the back seat and front legs on the armrest, and if she only put on her sunglasses she’d look like she’s on a cruise. Five minutes later she gets up and crowds into the passenger seat, too, while Henry adroitly makes his way back onto the armrest, sitting on his hindquarters and looking straight ahead, striking a Prince Henry pose. Some 10 minutes later they’ll switch again. Eventually Aussie will get back to the back seat where she looks out the window. She doesn’t look out the window of the front passenger seat, she disdains the sideview mirror, but I have not removed it so far, her protests notwithstanding. (It’s not fair! It’s not fair!)

6.  Sleeping arrangements have lately shifted. It used to be that Aussie slept downstairs (I’m on guard!). But this summer she came upstairs on account of all the thunderstorms. When the thunder and lightning start I hear paw scratches on the floor and then the quick jump on the bed. “Wow, Aussie, you’re heavy!”

“Make room under that blanket!”

“What about the sedative I gave you?”

”Triple it next time.”

We fight it out because I’m afraid of thunderstorms, too.

“You’re hogging the blanket! It’s covering all of you and none of me!”

And finally, when we come home to find lots of Amazon boxes on the front stairs with back-to-school supplies for local children, nobody—but nobody—is allowed to pee on them.