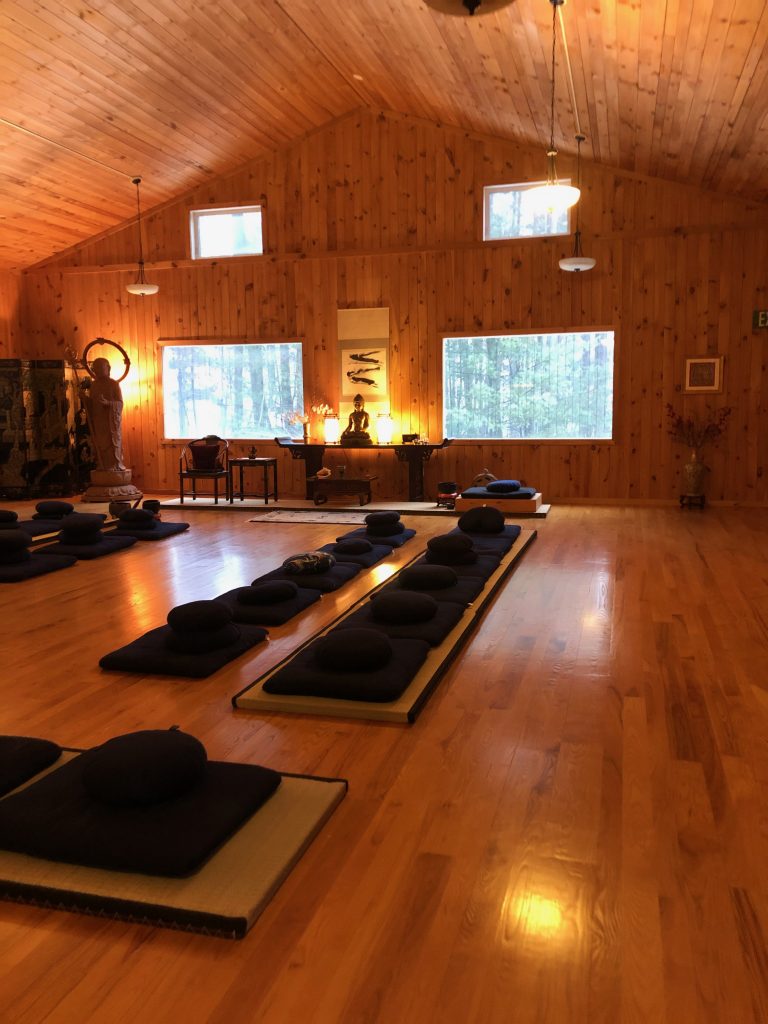 We usually do our summer retreat in mid-August. Green River Zen closes for the month but we come back together for the retreat. It’s scheduled for August 18-22 this year, and I still don’t know whether we’ll do it just on Zoom or in person, too (hybrid style).

A handful of us have been coming together on Saturday mornings to sit at the beautiful Windhorse Hill Retreat Center, owned by Engaged Mindfulness Institute; others come in by Zoom. I know this hybrid technology makes all kinds of long-distance connections possible and enables folks who can’t get there, due to age or medical conditions, to be there as well, but I don’t really grok it.

A small group of people sit together, and even in silence we’re vividly aware of each other, we self-organize to do whatever has to get done, talk, smile, and laugh at the end. And there’s the group that looks from the outside in, or at least it feels that way. They’re at home, in fact you can see the home in the background of the square in which they appear. They’re in their own practice space as we are in ours, but to me it feels like two different groups.

When you’re there in person there are bodies, movement, chairs and cushions adjusted, robes put on, books given out, altars set up. We’re engaged in a practice that deepens not just awareness of self but awareness of other, too. How does that happen on Zoom? We can communicate deeply, but for me it’s still computer icons communicating deeply with computer icons.

The mind speaks its truth, but the body speaks deeper. Someone describes how he was hurt from a fall, but it’s nothing like seeing him limp around, sitting on a chair, even raising and resting the leg on another chair. Someone has had a hard time with her children who’re stuck indoors all week due to the rain. She has her story about it—we all have our stories—but it’s nothing like what the body shows: blue caverns under the eyes, getting up slowly from the cushion, preoccupied look on the face. The whole organism is showing the story.

Technology makes so much possible even as it drives us further apart from one another.

So much happens on the way to the zendo:

A deer hops across the road.

You’re stuck going 15 mph behind a semitrailer trying to negotiate the Sunderland road that’s being repaved.

You thank the signal person who’s managing traffic on the one lane that’s open—and remember how many people work on weekends.

You see the clouds drifting over from the west and wonder if it’ll rain yet again.

You pass a local farm and remember to pick up some fresh corn on the way back.

And finally, you turn into the farm below the zendo where Haitians are picking vegetables, which brings Haiti right here to the Valley. Do they wonder what’s happening to their families? They’ve been working for low wages under this month’s perpetual rain even as disorder and violence run rampant back home.

The person who arrives at Windhorse to do a Saturday sitting is not the person who left home. She’s greeted animals, got nostalgic upon seeing a Ben & Jerry’s truck with its picture of happy cows in the Vermont hills, and finally, a flash of Haiti.

That person will sit with others who also had their adventures coming from home.

“Someone almost ran right into me,” one says, shaking his head.

“A hawk flew right over the car when I drove up,” someone else says.

The mallet is hitting the suspended wooden board, calling us to sit. We sit together, mixing it all up. My inhale is their exhale, and their inhale is my exhale. Our shared stories all mixed together so organically we don’t even notice.

This don’t happen on Zoom.