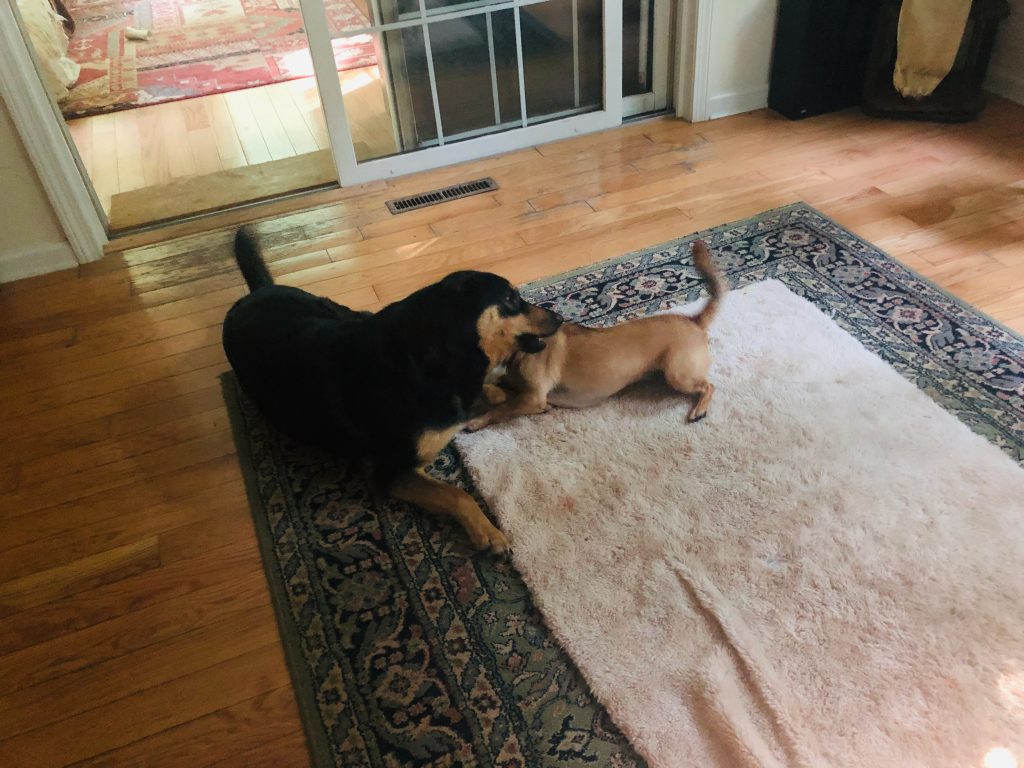 It’s been raining hard for some 36 hours. The dogs entertain themselves while I call my mother.

“Barbara is the woman who the king met at the seashore.”

“He met her and he liked her so she thinks she’s going to be queen. Because he made her.”

“And who is Barbara again?”

“Some woman he met at the seashore. I’m waiting for her, she’s supposed to come here. And I’m going to tell her some things.”

Then she starts singing a song from her childhood in Czech.

“A child looks out the window and sees a dark city, but there is a light in one window,” she translates cheerfully. Then she sings another, and when I ask her about that she tells me it’s a hopping song they used to play when they were children. She sounds very happy now and adds: “Barbara’s not coming but it doesn’t matter, she can’t ruin my happiness, you know why?”

I love these conversations with my mom, I can stay on the phone forever.

Some might call them nonsense. They are non-sense, in that they don’t meet the criteria for sense. Whose criteria? The criteria of consensus reality. I read that term somewhere, implying that there is a general sense of how things really are that a consensus of humans agrees on. According to consensus reality, the above conversation makes no sense. My mother doesn’t know any Barbara and we have no king in the family last I checked.

Neither do I try to psychologically analyze this. For example, is she referring to her son who remarried a year ago because he found another woman to make him happy? Cliché, cliche.

I love this conversation precisely because it makes no sense. It’s some kind of channel to invisible images and tales, stories from other planets, other beings who may see the real reality that I can’t because my senses are so limited.

Since we create reality with our mind, my mom and I don’t live in the same reality. Sometimes her mind creates nightmare scenarios for her. That’s when I get urgent appeals to make sure I have food in the house (“Always, always keep a loaf of bread in the refrigerator and a bottle of milk, you never know what can happen!”) and not to leave the house no matter what because the tanks are on the streets. This latest reality involves a Barbara who is not the real queen, and a king who may not be the real king.

There are implications for her wellbeing here that I’m not blind to; I’m especially concerned when she feels terrorized and in fear of her life.

At the same time, I’m fascinated by my mother’s many lives. I even envy her somewhat, for she has to deal with a Barbara and a king, while I wonder how to walk two dogs in the midst of rain. We label one dementia and the other common sense, but I forget that when I talk to her on the phone, when I hear the indignation in her voice that her position is being usurped by a strange woman or the promise that she’s waiting for the real king—the real king!

Who is that, I can’t help wondering. My mind, feeling rootless and barren this gray, rainy day, now goes to a sunny seashore. By that seashore a king meets a woman called Barbara and falls in love, or in lust. Now Barbara thinks she’s queen. The rest of us groan under her whims and dictates. Who does she think she is? So what if she’s beautiful or curvaceous, does that make her queen?

And who made her queen? If he can be fooled so easily, maybe he’s not the real thing, either. Who’s the real king? Where is he?

The dogs can’t compete with that.