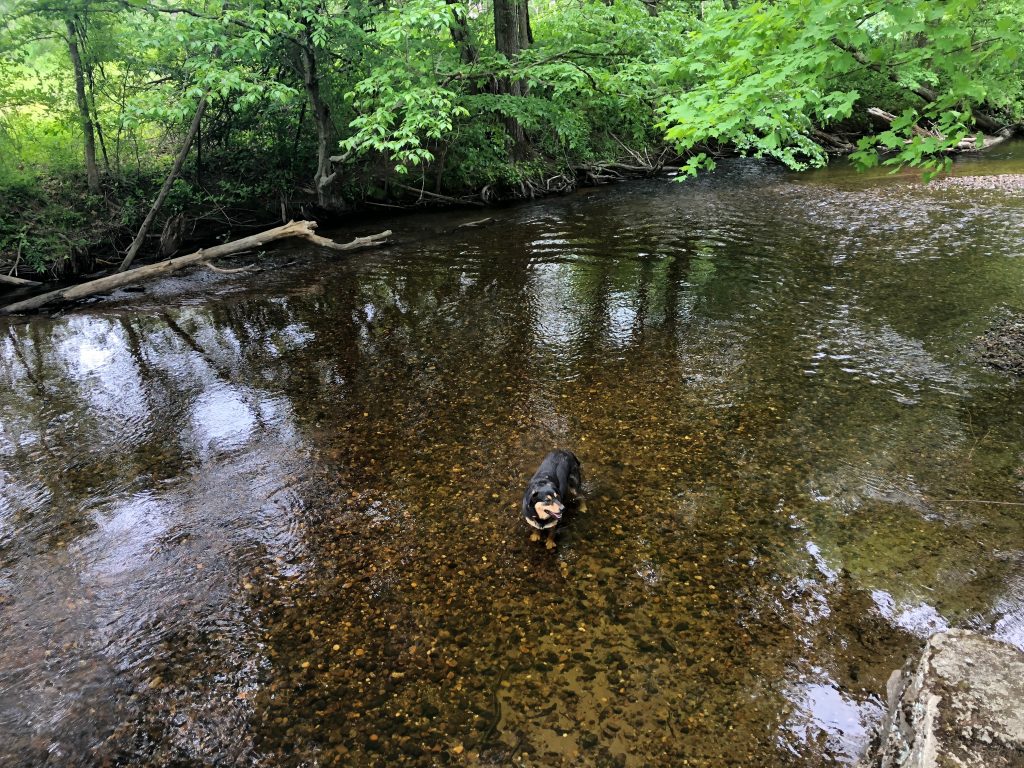 “In this weather? Nothing. It’s too hot!”

“You went splashing in the water this morning, Auss, and you will again later. You don’t swim, you just wade in there and look happy. “

“You know what’s wrong with this country? There’s no Olympic competition for just wading into water and looking happy.”

“As a matter of fact, Auss, they’re holding tryouts for the US Olympic team right now.”

“I can’t compete because there’s no category for me.”

“The winners in those races look awfully happy to me, Aussie.”

“In Humanland, if you win you’re happy; if you lose you’re unhappy. In Dogland, you just go into the water and you’re happy. I would take gold if they had a category like that. Not to mention chipmunks.”

“You want an Olympic competition for chasing chipmunks?”

“When was the last time you caught one, Aussie?”

“We need a canine Olympics, Boss. The first competition will be: How fast can you eat?”

“Depends on what you feed me. Give me sirloin and watch me stuff it. Another one is, put dogs inside a fenced yard like ours and see who manages to get out first.”

“And that dog wins gold, Aussie?”

“No, that dog comes last. You have to be an idiot to leave here. Here’s another one. For this we need a live fawn.”

“It’s the best! A pack of dogs goes into the woods and the first one to take down a fawn wins.”

“That’s why Leeann won’t take you  out for several weeks, Aussie. She told me that there are lots of fawns out there this year and a pack of you broke away from her last week and attacked a fawn. She was devastated; it was the first time that had ever happened. Did you attack that fawn?”

“You had a bloody muzzle, Aussie!”

“I was picking strawberries.”

“Leeann won’t take you and other hunters out for a few weeks, Aussie.”

“That’s no way to treat an Olympic champion. I know! A digging competition! Gold goes to the one who gets the woodchuck. Or a bacon competition.”

“You leave bacon on a counter a short distance away and we make a mad dash and jump up to get it. The one who jumps highest wins.”

“What about Jewish or Muslim canines?”

“They’ll win the fastest get-me-out-of-here race. That’s why bacon is so good. You either run towards it or away from it; not much middle ground with bacon. There are lots of other great races we can hold in a canine Olympics: Who snores loudest on a cold day by the fireplace? Who contorts herself to take up an entire queen-size bed? Who wets the most people by shaking herself off after a dip in the pond? We could have a special  competition for chihuahuas like Henry, too.”

“What competition is that, Aussie?”

“That sounds about right for both your IQs. Pretty dumb game, if you ask me”

“You should have seen how silly you looked standing in the middle of the pond today with that big grin on your face, Aussie.”