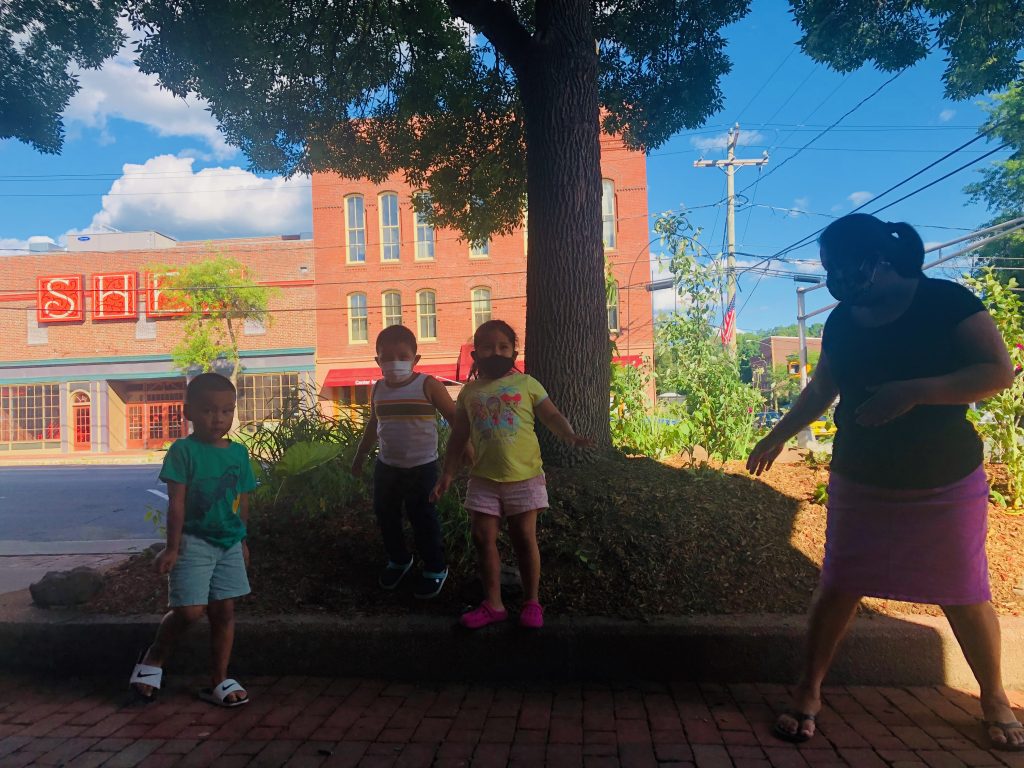 Yesterday was Wednesday, so Jimena and I met in late afternoon. It’s summer now, we’re back to meeting outdoors on the corner of a busy street just as we did last year, till the cold winter forced us into the closed front porch of her house.

It was nice to be out there again, part of town life, people shopping for groceries, darting into the barbershop, picking up pizza, bringing in dry cleaning or taking out ice cream for the kids. Normal people doing normal things. At times, when I meet the men and women who are here illegally and need extra help, their children giggling and well dressed, the girls with bows in their pigtails, the mothers tired but proud, it’s easy to think they’re just like everybody else only with extra money worries.

That’s not true at all.

But small things first. Lilli (none of the names here are their real names) comes for food cards and brings an enormous bag of broccoli heads for us from the farm where she works, and proceeds to detail a recipe for broccoli, bacon, and cheese. “You know I’m not taking all that home,” I tell Jimena. “This is enough to feed four families.” And indeed, at least two other women take some before Jimena and I, at the end, split the remainder.

Irma shows me her electricity bill. She’s heavyset, a haggard look on her face, and accompanied by a little girl. They owe $425 for electricity that has carried over from their unemployed winter. If it doesn’t get paid down, their electricity gets shut off on July 1. They’re undocumented, so they don’t qualify for emergency assistance programs against eviction by landlords or getting cut off by utilities.

I do a little arithmetic in my head. Yes, we have the $425. Irma murmurs something to Jimena. “She’s afraid she won’t get it in time and they’ll turn off the electricity,” she translates for me. “I tell her you keep your promises.”

“So far, yes, thanks to many, many people,” I say. It’s hard for her to understand how one gets support through a blog and but she nods appreciatively. I’ll get the cash tomorrow and get it to Jimena.

Lydia with three children arrives for food cards. “Do you need diapers, too?” Jimena asks, and right away calls her husband to bring diapers size 5 from the porch of their house two blocks away. The children play. Claudia also appears, 7 months pregnant. The women talk. Lydia’s son was always so attached to her he would never leave her side. She had to go to work so they brought him to a woman next door who takes care of the children, and now he can hardly wait to go there. Every morning he gets up and shouts the word: “Bye!” Everyone laughs. It’s a beautiful day.

Elena arrives, slender, wearing a baseball cap. From a distance she seems young but as she approaches I see her face is mottled and worn. She comes for food cards and chats with the others but hangs around after they leave and starts talking urgently.

She’s trying to bring both her children, a boy and girl ages 12 and 14, from the Dominican Republic. She came here to work and send money home for the children, whom she left with her parents. Millions of women do this all over the world, including my mother’s caregiver in Jerusalem, who left her little boy in her mother’s care in a small town in India and made the long journey to Israel. Every Wednesday, like clockwork, she goes to the post office to send money home.

Elena was not legal, and therefore couldn’t go back and forth to visit them. She worked day in day out and lived frugally. Now she has a path towards legal residence and wants to bring her two children to finally live together with her. She has a lawyer and must sign plenty of affidavits. One insists she prove that she can afford an apartment for the family. That means she has to leave the little room where she’s lived and pay for an apartment, a real home, for the children. Once all the affidavits are signed she has to wait three more months, and then the children can come.

Both women shrug. It’s always the same here: first month, last month, and security down, a total of $1,800.

So far, Elena’s tone has been almost casual, smiling, eyes veering from the ground to Jimena, as if not much is at stake. “Ocho anos,” she says. Eight years. The smile remains, but tears gather around the eyes and she turns away so we shouldn’t see them. Soon it’s a full breakdown; she can’t stop weeping.

She hasn’t seen them in 8 years. She left her children when one was 6 and the other 4.

How is that possible? It’s a naïve question from a naïve Norteamericana who should know better by now, who should know that all kinds of things are possible when there’s no ground to hold you as you try to keep standing, keep walking. Who by now should know that the poorest of the poor here are still miles ahead of many whose only crime is to be born elsewhere.

I think of spending last weekend in Maryland with Bernie’s daughter, her husband and son. In many ways, home is family, especially to these families who didn’t need covid to remind them what Thanksgiving meals feel like with no one around the table, no one opening gifts under a Christmas tree.

Almost each and every one has had to come to los Estados Unidos to make money to send back to support entire families. Is it any wonder that, whenever anyone has to go anywhere–be it the bank, the store, or a doctor’s office–the entire family comes along?

Jimena hugs her. I hug her. The sacrifices people make again, and again, and again. She shows me a photo of the boy, who has dreamy looking eyes and the kissingest lips you ever saw, practically in the shape of a heart. “Good luck,” I murmur.

If you can, please consider helping Elena and those like her be united again with their families. Thank you.