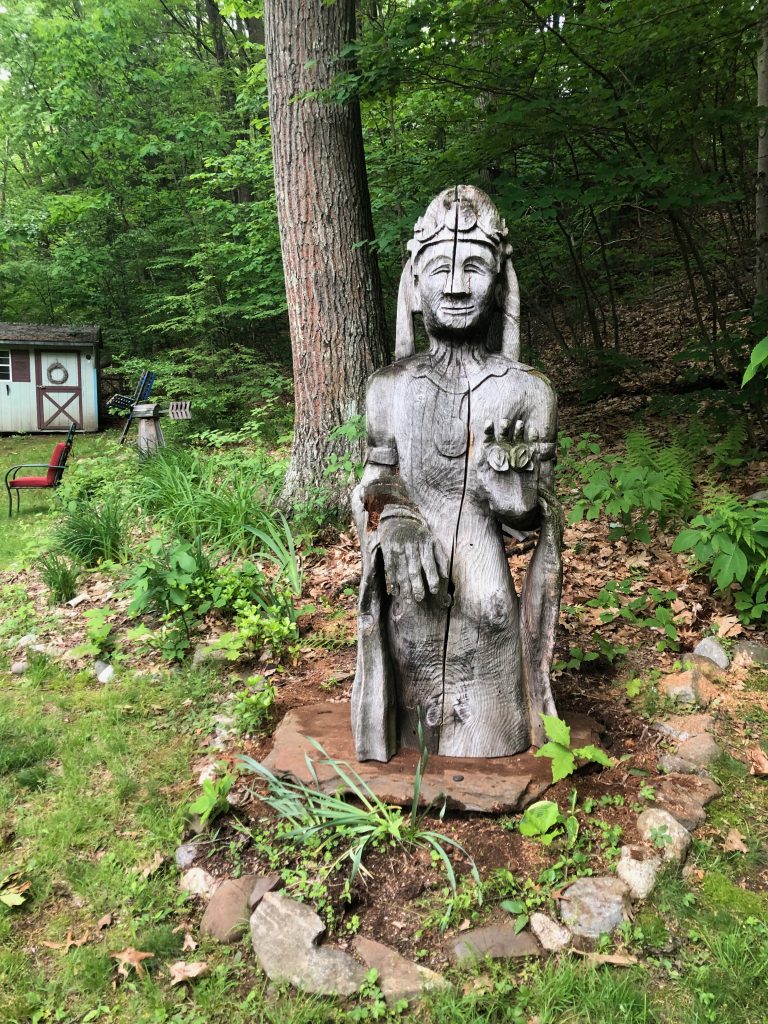 My friend Doug arrived yesterday. We hadn’t seen each other in a long while. It was he and one other man who’d brought the Kwan-Yin to us a decade ago. He looked at her now, prostrate under the blue tarp, and said: “I think we can do this.”

The back of the thin stone pedestal that had held her up all these years had sunk into the ground, causing her to lose her grip and fall backwards. We cleaned up the wood chips and dust from the bottom part of her body (she had been a nice meal and home for certain critters). After that we put pieces of slate under the back part of the pedestal to level it, and after a few more efforts and repeats, she came up and stayed up.

I thanked Doug. He said: “I don’t know if she’ll be around for another 10 years.”

This morning I went out to make bows and recite the Kwan-Yin mantra for the healing of suffering beings. Aussie watched.

“I think Miss Compassion got shorter,” she said.

“You’re right, Auss. Doug had to saw off the bottom part of her that had been gnawed and eaten by rodents.”

“She used to be a lot taller than you.”

“She was easily 7 feet tall when she got to us. She’s lost at least a foot to feed and house hungry critters.”

“Sons of bitches,” says Aussie. “At this rate she’ll become a pygmy.”

Five minutes and three peals of thunder later, Aussie rushes out of the office.

“Where are you going?” I hurry after her.

I know where she’s going. She runs to the kitchen and out the dog door into the garage, waits by the car. I open the door to the back seat and she jumps in. After a short while the thunder passes and I go out to the garage. No Aussie inside the car. I look all over downstairs and up, then go out to the back and call her name, see the tip of a wagging tail out front. I go to the gate and open it.

“How did you get out of the fenced yard? And why?”

“All over New England.”

“Aussie, you can’t keep on running from what scares you.”

I returned from Israel with a deep dissatisfaction that hasn’t gone away.  I worry about how insulated I’m getting in this beautiful Pioneer Valley, where everything is green on time, the bearded irises bloom on time, the dogs run around joyfully in the woods and, at worst, run into the back seats of cars for safety.

Of course, not everyone lives this way.

In my heart, I understand the Palestinians. Those living inside Israel are second-class citizens (I don’t care whether you call it apartheid or not, almost no one disagrees that they’re second-class citizens), those in the West Bank are governed by a corrupt regime in cahoots with Israel, and those in Gaza live in abject poverty under a repressive religious regime whose goals aren’t necessarily the relief of suffering of citizens.

I have very little sympathy for Hamas; the people here who raise its banners would never choose to live under its intolerant auspices. But among Palestinians they’re becoming more popular than ever because they’re sending a message to Israel and the world: Our suffering counts! You can’t forget about us! You may think you’re safe in pleasant, prosperous lives, hanging out in cafes or else on Zoom while we at times have electricity only for 4 hours a day, the water turns off, we have no jobs and the only way we feed our children is through giveaways by the EU, Saudi Arabia, and the Emirates, who can pull the plug whenever they—or Israel—want to. But as long as we’re not safe, you’re not safe.

Some people feel very discouraged by this, a sense of existential insecurity: Nothing will ever change. But for me, this is encouraging news. It’s as if Kwan-yin is saying: You want to be safe, help others be safe. You want to have comfort, help others find comfort. You want to breathe clean air and drink pure water, give these to others, too.

I’m looking for ways to be more involved with the local community of immigrants, many of whom are here illegally and fall easily through the cracks. I want to be more connected to the rawness of things, to the chainsaw cutting away at our height because of critters needing homes and food.

Glad that Aussie, after panting and trying to climb up on my lap during the thunder, has finally found a restful silence and is taking a nap behind my chair.