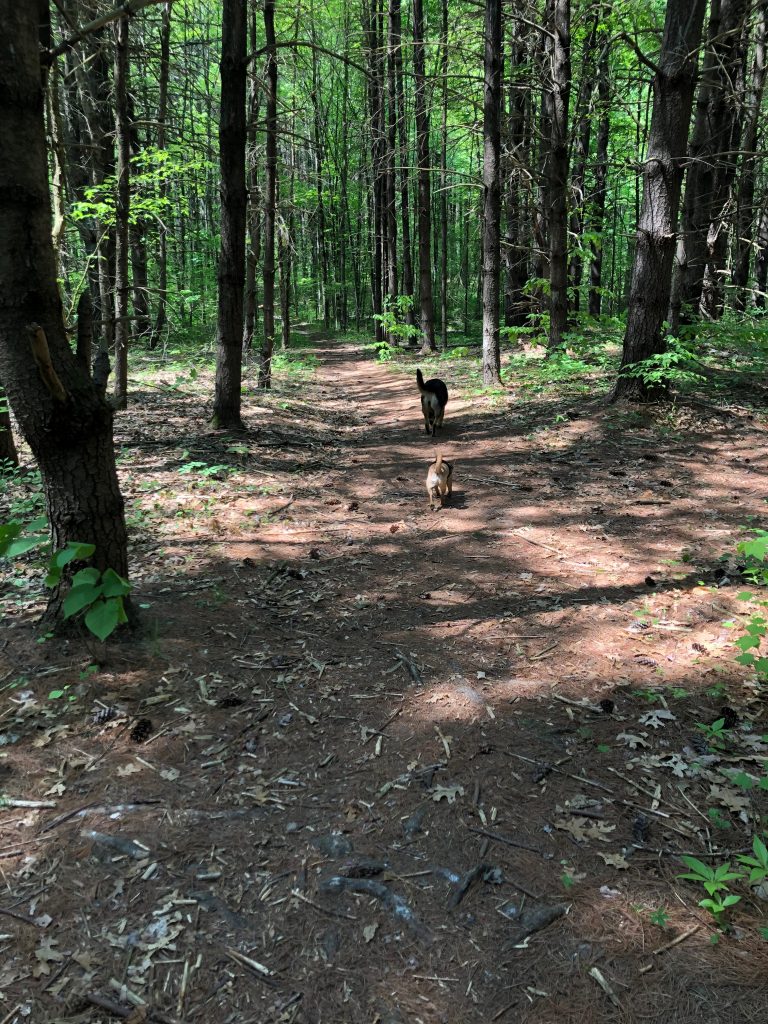 I’ve gone back to walking with Aussie and Henry in our woods. But I can’t get the Middle East out of my mind.

That’s a question that I came across a lot when I was in Israel. The television reporter would interview a Jewish man in a joint Jewish-Arab city or town, where extremists from both sides yelled, rioted, beat up, and even threw Molotov cocktails at each other. A man would tell the story of how the building in which he lives, composed of Jewish and Arab-owned apartments, put up a barrier against extremists. An Arab neighbor removed the barrier so that Arab extremists could come in and burn up the man’s car.

In variations, this happened on both sides.

And the inevitable question comes up: We’ve been living together peacefully for many years, and suddenly he does this to me. When all this is done, how do look him in the eye? How does he look me in the eye?

“Even the dumbest dog knows you never look anybody in the eye for more than a second, it’s an invitation to a fight,” says Aussie. “Even Henry knows that.”

“We’re not dogs,” I tell her. “We’re humans. Looking someone in the eye is crucial both to see someone and also to  be seen.”

“You don’t have to see me,” Aussie says. “Feed me, take me to Leeann, and play with my ears. Keep the rest.”

I need the rest. Sometimes our roles hide us. Someone looks at me and sees an older woman (ahh, maybe she’s wise), a teacher (can’t talk back), a soldier (ahh, courage), a child (someone to be taken care of), a businesswoman (knows how to make money). We respect them, we listen to them, we even obey them.

But you know what I want? To be seen. Not in the clothes of some role, but as I am. And I want to see you as you are.

Bernie disliked the classical way in which students listened to a Zen talk, in which they looked down on the ground in front of them and took the words in, or let them words sweep over them. Every once in a while, someone who trained someplace else would come into the zendo when he (and later I) gave a talk and would look down on the floor just as he’d been taught. When that happens I don’t say anything, but I think: Come on, look at me. Let me look at you. Let me see the flash in your eyes, that living spark, person to person, not teacher to student or vice versa.

And yes, I’m aware that in some human cultures, looking someone in the eye is considered disrespectful. Many years ago, Zen Peacemakers organized councils between Arabs and Jews in Israel. The group included some very feisty and activist Arab young women from Umm al-Fahm and Baqa el Gharbbiya, but whenever an older Arab man sat in the circle they’d say nothing. It was disrespectful to talk in his presence, they explained later to us, especially to voice disagreement. “You’re not even supposed to look him in the face,” one explained.

Sometimes I find the differences among us almost overwhelming, as if God is saying: “You think you know what I look like? Take a look at this. And at this. The arrogant (and Aspergerish) Elon Musk, mom’s caregiver, St. Swapna, who barely sleeps at night because my other doesn’t sleep at night, the porcupine that waddled across the road just as I was driving home, the shadow of an owl in last night’s moonlight followed by a scream.”

In a couple of hours, I will leave for my first meeting with Jimena Pareja to bring her food cards for immigrant (many of them refugee) families. I haven’t been able to do this in several weeks. She also asked for rent help for a man with two small children whose wife was deported, and I’m bringing her $750. She’ll give me more details then.