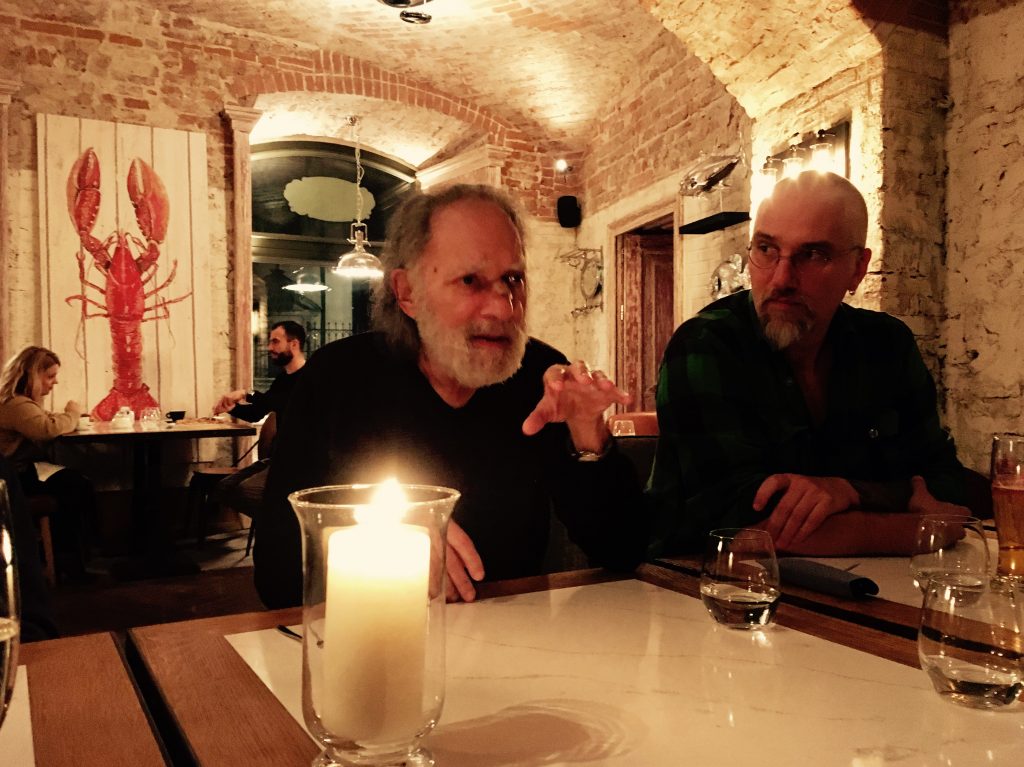 I came across this photo of Bernie and Pake Hall, from Sweden, at a restaurant the last time we were in Krakow, Poland, for our annual retreat at Auschwitz. It must have been November 2017, almost 2 years after his stroke, and Bernie had a band-aid on his nose. Underneath was a squamous cell melanoma that would eventually necessitate a couple of surgeries. Already it looked pretty ugly, so he covered it up with a band-aid.

For the last year or so of Bernie’s life, he spoke to a counselor by phone every week. It was a generous offer by an old friend, and to my surprise, Bernie took him up on it. I still remember the phone conversation.

“If he’d like to talk to me, I’m available,” was the message.

Bernie said yes, and they talked weekly. Not very long, I noticed, sometimes 15-20 minutes. I didn’t hear what they said. Every once in a while I’d ask how it was going, he said fine, and that was it.

They had their conversation the day I returned home from Europe on November 2, 2018, and Bernie died 36 hours later. A few weeks later his counselor died, too.

Very shortly after that second death I had a conversation with the counselor’s partner, who  told me that while his partner never shared the contents of those conversations, much as Bernie hadn’t shared them with me, he did say that his last conversation with Bernie had been a very important one, and that something had really opened up for Bernie during that last talk.

Bernie didn’t tell me anything, and he’s not here, either, I thought to myself.

Over and over again I tried to imagine the phone dialogue as he sat on his chair after lunch, his closing up the phone, resting in bed for the afternoon. Over and over, I imagined what life might have been due to that big opening. His body was probably going into sepsis even then, but no one knew.

I got upset about it. What’s the good of a breakthrough if you go and  die right afterwards? It’s just like Bernie to do something like that, I thought.

Whatever happened in that phone conversation, I’ll never know. I’m left with what was, which was huge, and still, at times, not enough.

It’s not about God and Adam but about me and people,  me and him. I wasn’t him and he wasn’t me, I think to myself. We had our moments, hours, days, did so much together. We empathize, listen, care for, yes, love too—all that’s available, but we’re different so we can’t fully touch no matter how hard we try.

But oh, that trying! That reaching!