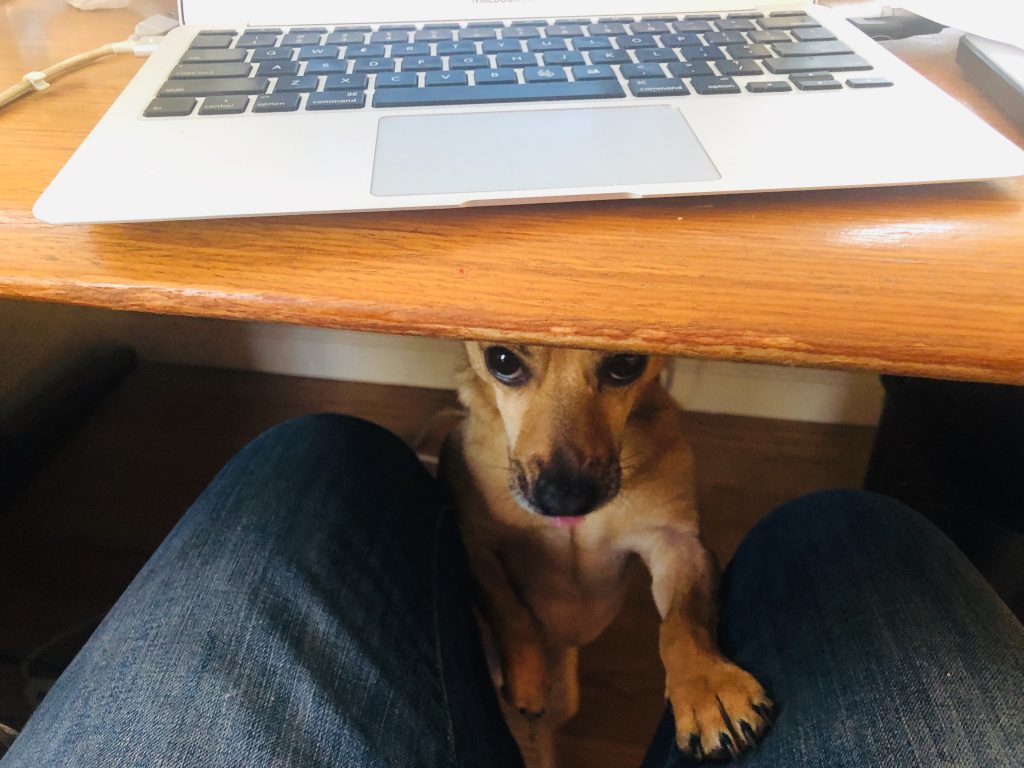 “Aussie, I didn’t manage to write a post on Wednesday. That adds up to only two posts this week, not my usual three.”

“Don’t be so hard on me, Auss, I feel bad enough already. You know what a dear friend told me? He said it’s the saints who feel bad about their inadequacies. The more they see themselves in action, the more persuaded they become of their lapses.”

“Of course not, but he said that ordinarily people resist examining their behavior too much, so they don’t feel as bad about their failures as saints do.”

“If he was Jewish he’d know it’s a broader phenomenon.”

“The thing about getting older is that you have to learn not to sweat the small stuff, Auss. You don’t have that much time ahead of you, so make sure you give your attention and energy to important things.”

“So when do we go walking?”

“My walks with you are definitely among the important things, Auss.”

“Our walks are the only important thing you do all day.”

How do I know? I can get so much into my head about what the world needs, what the future demands of us, my own importance,  etc. I can get inspired by a book, a talk, certain teachings. But how do I know what’s truly valuable?

Lately, when the dogs come over for attention, I pause what I am doing, stroke and talk to them, give them what they want. Aussie makes a mewling sound, and when I swing the chair around towards her she brushes against my leg, first giving me her brow to circle with one finger, then her silky ears, and finally her back.

Henry will come under the desk and tap my leg with his paw, but he can’t get up on my lap till I again swing the chair sideways away from the desk so that he has room to climb up and sit in contemplation. I’ve decided to put aside the hurrying voices in my head (You gotta finish this!) and pay attention, look into his eyes, watch him staring out the door at the wind shaking the trees and the squirrels he loves to chase.

I’m  amazed by how much is contained in his 13 pounds. I marvel that his small body contains a brain, lungs, kidneys, muscles, ligaments, joints,  and millions of cells just like Aussie, who’s almost five times bigger. Just like me. How do all those things fit in there? He’s clever and full of spunk. How does so much energy emanate from a being so small?

For some odd reason my mind meanders to a story Jimena Pareja told me about one of the mothers who gets food cards with her little boy. She always refers to them as mothers. We were sitting on her porch on Wednesday, front door open to wait for the next people coming (she always asks them to come one by one, not in a crowd). She was exhausted, which is another story. But she told me this:

A mother tried to cross the border with her 5-year-old boy. They had no papers of their own, nothing even from their country of origin. A “coyote” gave her papers for herself and for the boy, so that once they got caught after crossing over they could apply for a form of refugee status, or hardship cases. The agents would then open a file for them and let them stay till the case was adjudicated.

What she hadn’t realized, due to illiteracy, was that the coyote gave her papers in different names. The border agent looked at what she presented and growled that the names are different, that the boy wasn’t hers and she  must have just taken him across the border to raise the odds of getting permission to stay. He was going to separate them.

“So why are the names different?” the man asks.

She has no answer. Instead, she offers to show him photos of herself and her son from her cellphone, but the agent has already confiscated that and won’t return it to her. “Anyway, it’s locked,” he says, looking at the screen.

“I can open it, I’ll show you,” she says, and still the refuses to hand over the phone.

The agent looks at him, hands him the phone, and to his mother’s amazement he punches in the code that unlocks the phone, scrolls through photos and shows the agent photos of his mother and him. The agent relents and lets them stay together. Eventually, they land in my neck of the woods

“If not for my little boy punching that code, they would have taken him away from me at the border,” she told Jimena. “I had no idea he knew what it was, he must have just seen me doing it enough times and he remembered.”

Contrary to the laws of physics, it’s the smallest things that sometimes carry the big.