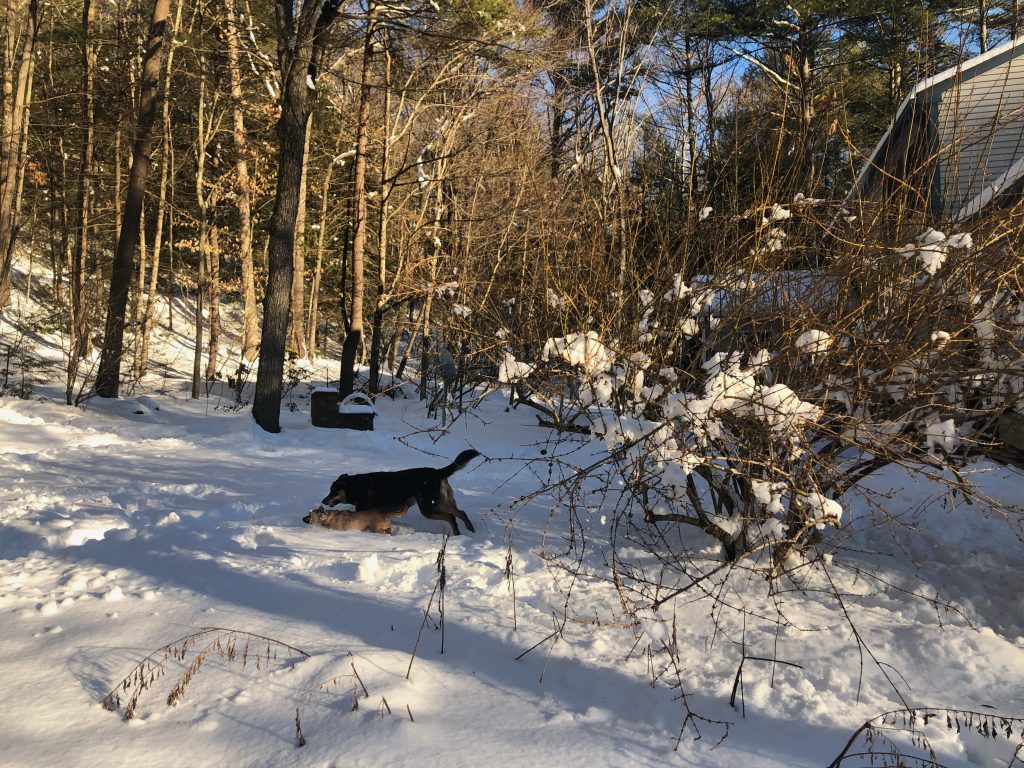 Some mornings when I come down, Aussie turns onto her back so that I could stroke her belly. But Henry also wants attention. He scampers up onto my knees, ball in his mouth, and leaves it in my lap to throw for him.

I have two hands, I could do both, stroke the belly of one dog and throw the ball for the other. But if I so much as once throw the ball for Henry, Aussie gets off the futon. It’s as if she can’t fathom how I can do two things at once. She wants all my attention, and if she can’t have it, she leaves the scene. And as always, I think of my grandfather’s warning to me when I was a young girl and sitting at the table for a Sabbath meal with him: “Chava,” he would say, “not even angels can do two things at once.”

He was a rabbi from a Russian family of rabbis who never adjusted to living in the United States, where he immigrated due to the kindness of cousins who applied for a visa on his and his family’s behalf through the family reunification process, financially vouching for everyone. I remember that whenever I am with immigrant families.

“How did you get here, of all places?” I ask them, thinking not just about how different the weather is here from what it is in their original country, but also about the long way they had to make from Latin America across the border and then diagonally up to the Northeast. And the answer is always the same: My brother got here a few years ago. A cousin. My uncle.

They arrive, move in with already-crowded families, look for work, send money back home to the older people who often have little food and no medical care. And they’re there for other family members who will come in the future, encourage them, help them find work, give them support till they make it on their own.

It’s how my family got to America and I see that continuing in front of my eyes.

I’m surprised at how often I think of my grandfather, with whom I felt almost nothing in common, or my grandmother, who used to say Oy! so often I would make an inner wager with myself as to how often I would hear it from start of visit to finish. I hated Oy! I hated complaining. I hated, as Jon Katz likes to put it in his blog, old people talk. I was young and full of expectations. I knew early on I wouldn’t be a member of good standing in their world. I wanted to put them behind me, get away from all confines, from complaints, from the history (If you understood what we went through!).

I put thousands of miles between my family and me, I saw no other way, there were many good reasons for doing so.

My mother will be moving by the end of this month after renting an apartment for many years. The landlords were very kind, giving her a special discount in her rent on account of her being a Holocaust survivor, which means a great deal in Israel. But they finally require the apartment for their own mother, who wishes to return to the home she once had, so my mother has to move at 92. She can’t keep this in her head.

My sister and brother finally found a nice apartment in her general (expensive) neighborhood, close to the synagogues she always liked (none have been open for a long time). They will finalize it this week and the rent will almost double.

But for now, I think of my sister packing up my mother’s things. It’s that first cycle of going through old papers, clothes, documents, photos, books, notebooks, etc. that I know so well from after Bernie died. My mother is still living, of course, but in some ways it’s the same thing, a journey into her, and therefore into me.

Which I can’t be a part of. Israeli airports are shut. Even if they reopen in time, current quarantine rules are that they put you away in their housing, not in yours. “It makes no sense for you to come,” my sister told me. “And it’s not going to be as tough as you think, we’ll be practical about it.”

I wanted to be part of that journey into the past, unearthing hints of things (Is that her and her nephew in the refugee camp in France? Is that the young man who led that camp and who she said adored her?), the letters from us (and especially from me, since I was the one who lived a long distance away) that she kept—what was there that caught her attention and convinced her to keep it? Perhaps her divorce papers, which mark one of the most painful times of her life, a photo of a holiday party, and most important, some reminder of her big family that stayed in Poland, didn’t go to Czechoslovakia with her parents, and were destroyed.

Hints and traces of family, so eagerly sought by a woman who did everything she could many years ago to put miles and miles between them. The doors between us were like barricades then. They were not the parents I wanted; I wasn’t the daughter they wanted.

Till we all got older. Now she tells me how happy she is with her children every time I call. And I imagine working alongside my sister on my mother’s past: Look at the date on this letter! Who do you think this is? Look at all these recipes!

Outside the New England snow has blanketed everything, reminding me that here I am, surrounded by hungry birds and squirrels whose feeders I need to fill, the skies finally, finally blue and sunny after many days of clouds.