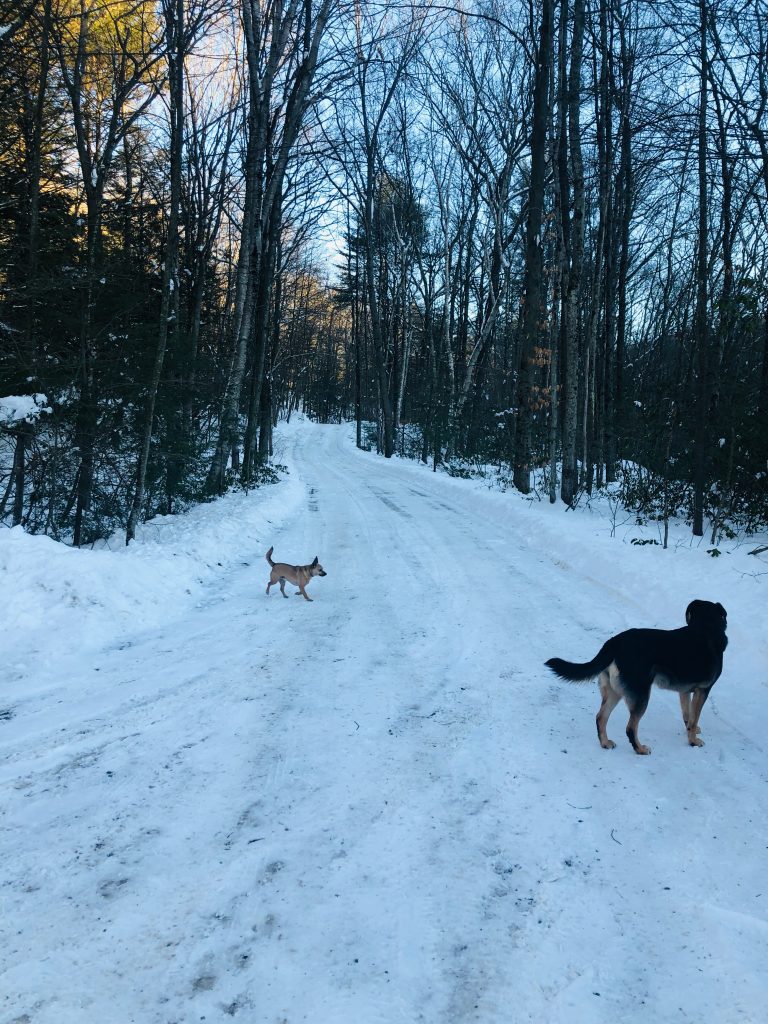 We got well over 12 inches of snow several days ago; more is on the way.

I’m spoiled. The snowplow arrives in the morning to plow the long driveway while my housemate shovels the paths and steps, part of our housing agreement, leaving me to fill five birdfeeders and prance around on the snow with the dogs. In my 69th year I discovered studded snow tires (where have you been all my life?). You can’t drive on them once spring arrives because of the wear and tear on the roads, but having them on the car in snow and ice is a dream.

Before the Age of Studded Snow Tires, driving up an icy driveway with declivities on both sides was a nightmare. There was a hump towards the top where the driveway met the road, and if you were driving too slowly or cautiously the car wouldn’t get over that bulge and start sliding down instead.

Bernie was very good at getting uphill.

“Here is what you do,” he’d say, lighting up his cigar. “Start way back where it’s flat, by the garage, then drive as hard and fast as you can so that it takes you over the hump, and voila! Whatever you do, don’t slow down. Press the accelerator all the way down,” he’d urge, taking a puff.

I would, only two-thirds of the way up I’d lose my nerve, loosen the pressure on the accelerator, the car would chug up the hump just like the small fire engine that could (“Come on! Come on!” I’d urge under my breath), only it couldn’t. Its wheels would churn on the ice (“Come on! Come on!” I’d say a little louder), and then start sliding back, and I’d have to apply the brakes carefully so that it didn’t skid out of control.

There would be no choice but to carefully drive reverse all the way down and try again.

Bernie would shake his head, take another puff: “No, no, you gotta take it all the way back, all the way back!” I would go all the way back and he’d say: “Now press that accelerator all the way down and don’t let up!” I’d do that, trying to control the wheel as the car rushed up the icy slope, the yellow skidding light flashing harder and harder.

After a couple of tries, I’d make it. The car would glide over the hump and come to bank on the road. He’d nod happily, take another puff, and I’d let out a sigh of achievement.

Our roles were reversed when it came to driving reverse (except for the cigar). Bernie couldn’t do it for the life of him. He sure knew how to do other things backwards, just not driving.

Then, too, driveways were the problem. We lived in La Honda, California, and the driveway went up a short but steep hill. Going up wasn’t the problem, coming down in reverse was. He tried it a few times, ran off the driveway twice. One day he hit the brakes and put on the emergency brake. Didn’t say anything.

“Okay,” he groaned, and after that I was the one who always drove the car down and onto the road.

But he was great at never letting up on the accelerator and getting over the hump on the ice.

Last night I was with Jimena as we handed out food cards and a young man came on behalf of his family. Jimena greeted him joyously, then told me about him:

“I know Mateo (not his real name) since the age of 2. His parents were illiterate and came from Mexico; he was born here. I got to know him when I worked at the community health center, which helped immigrant families with medical help. When I went to work for the schools at first I taught Spanish and math, and he was one of my students. I saw him grow up the whole life. He finished high school and won one of the State prizes because he’s bilingual and his reading and writing in both languages are very good. His score was so high that they gave him an award with a scholarship to go to Greenfield Community College. He’s now in his second year there studying business and accounting. In his time off he helps his father in the farms.”

I thought of Mateo driving home. Of parents who risked so much to raise you here but can’t help out with school, you work hard hard hard for everything. They labor outdoors in freezing temperatures while you get top scores and go to college to get a business degree.

Last night we gave out food cards and cash assistance in a total amount of $925. We’ve been doing something in this range weekly. A wonderful friend sent me a check for $600 telling me this was her covid relief money and she wants to give it for food cards. Thank you for your help, it continues to take us over the icy hump!

You can also send a check for immigrant families to: Eve Marko, POB 174, Montague, MA 01351. Please write on the memo line that this is for food cards. Thank you.