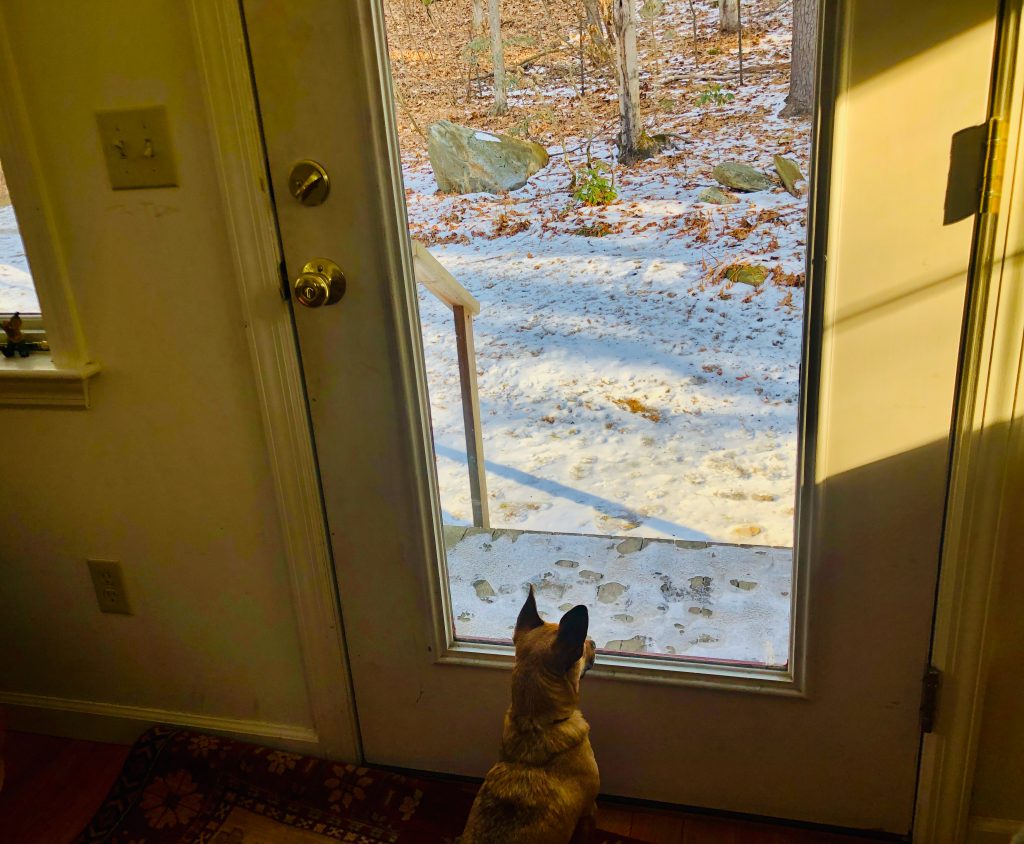 “Aussie, I’m a Zen Buddhist teacher. Does that make me an essential worker?”

“I could get the vaccine if I was considered an essential worker.”

“There will be for you.”

“What about if I’m a writer, Auss? A creative person?”

Many years ago, Bernie and I brought his dharma uncle, Junyu Kuroda Roshi, with his wife to Israel. We took them both, along with a few other friends, around the country; they later said it was their best trip ever.

Finally, the evening came when they were going to depart. We took them to Ben Gurion Airport near Tel-Aviv, the country’s international airport. There were various lines at that time and a young, harried woman looked at every passenger’s passport, deciding on the spot what line s/he should stand in. The holders of Israeli passports were processed fastest, then American and European passport holders, and finally the rest. That last line was long and slow.

“Over there,” she said, pointing to the slow line.

I tried vouching for them. “They’re not young,” I said to her in Hebrew. “They’re friends of ours, we know them.”

And they were indeed last in line. Long after everyone else had boarded, they were still being searched and interviewed, left to wait as various supervisors were called in to check them out. I apologized on behalf of Israel and they were polite and patient, but it was clear that they weren’t used to being treated this way. The Kurodas were a prominent Zen family in Japan, the robes alone would have facilitated a quick departure. But not in Israel.

We go up and down, depending on the situation. When I talk to my students, they’re very c courteous and usually call me Roshi. When Bernie first returned from the hospital after his stroke, they made us dinner after dinner, often eating with him when I had to be elsewhere. There’s a deep listening space around me, which is easy to get accustomed to.

Till I bring my car for servicing.

“Hey,” says the man behind the counter, no mask. “You got an appointment?”

I went today to the supermarket to get 15 $50 food cards for immigrant families. This week we’re also giving some cash to a family that lost its ancient refrigerator, which the landlord won’t replace.

“Hi there,” I chirp to the woman with short blonde hair and pencil-thin lips standing behind the Customer Service counter. I’ve seen her week after week for 10 months. “I feel like we’ve become friends.”

I do some quick mental math and estimate I’ve bought at least $40,000 worth of food from her. She tears herself away from the lottery tickets corner (the reason most customers  stand at Customer Service), opens up the drawer, peers inside. “$50 cards?” she scowls.

She takes them out and counts them—slowly. By now I know all the steps: She’ll  input them one by one into the cash register. If there’s no beep of recognition (it happens several times each session), she’ll peer closely at the number of the card, then at the screen, then back at the card before doing it again. Then she’ll break them in half, count them a couple more times. In the middle she’ll admonish those standing on line behind me to move over to the right can’t they see where the waiting line begins? She’ll tell me the total, I will tell her I’ve already inserted the credit card, she’ll peer at the screen and say “Right,” push a button, wait a while longer till the register spits out receipt after receipt, then peer once more at the number on each receipt as she folds them over carefully.

This morning I talked to a friend of mine who has been teaching much longer than me. We talked about what we’ve learned, what we’re still learning. How even as you get more experience, the horizon recedes because there is no horizon, just endless sky everywhere.

“What is that sound?” asks my friend.

I look at our Chihuahua mix Henry, who stares at me and then back at the credenza in the corner of the room. “Henry lost his ball under the credenza,” I tell him.

We try to continue the conversation, but Henry’s relentless. “Nnnnn! Nnnnn!”

I run out of patience. “Just a minute,” I tell my friend, “I’m going to get his ball, otherwise he’ll cry nonstop.”

I get up from the desk, walk over, and get down on the ground. The bright orange ball is under the credenza way in back. I sigh and slowly get up from the wooden floor (lately my left knee has been hurting), get a broom, get down on the floor again, and wave the tip of the broom handle all around under the credenza to get the ball out. It takes three tries. Henry grabs his  liberated orange ball with his mouth while I slowly get back up and go back to the computer.

“That little dog brought you down on your knees, Eve,” says my friend.