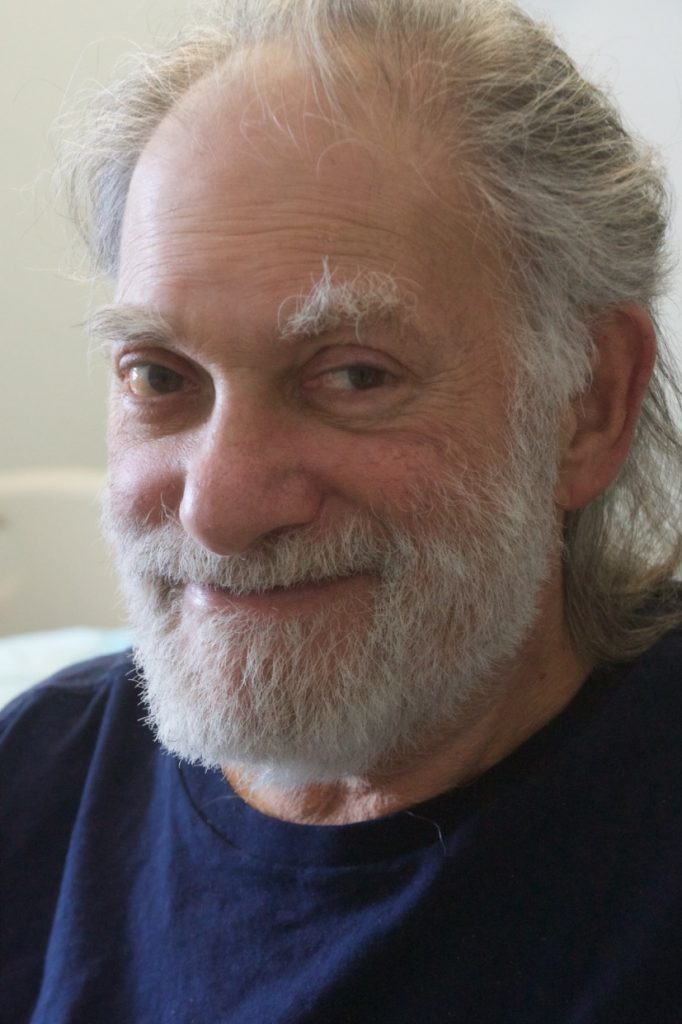 I planned to write yesterday, on the celebration of the birthday of Martin Luther King, Jr., whose life I studied and admired, and which this year fell on the birthday of my husband, Bernie Glassman. Bernie’s two-year memorial last November was accompanied by sadness and flagging energy for some 24 hours. The next day I felt fine, so I thought: Oh, it’s pretty much over. Bernie comes to mind every day, he doesn’t disappear, but the desolation and the pain, they’re mostly gone. And that translated to a more self-centered version: I grieved right. I went deeply into the pain, didn’t leave the house for first 49 days, went through the first year in a blur of mourning—I did it right!

You better laugh than weep. I long ago discovered that if I was to weep over my mistakes, I wouldn’t stop crying, so it’s better to laugh.

Yesterday felt like I was falling into an old, familiar abyss in which I questioned everything: What it is to be intimate with someone where so much of your identity is tied up with him, and what it is to lose him; what it is to marry your teacher; what it I to live a meaningful life once he’s gone; how I interact with the many people who knew us both as one unit and what happens now when we’re no longer one unit, etc.

It was a very, very funky day. I hoped the next morning would be different, and it is. And this blog helps; readers help. You’re going to get up and write, I tell myself in the morning. You weren’t up to it yesterday, but this is a new morning.

It’s no accident that this evening Green River Zen starts a 3-month study of vows. I live the challenge of living my vows day after day because there are days when, frankly, it’s the last thing I feel like doing. Or else I question the habit of doing them, that gets me to sit each morning, remind myself aloud of the vows, and then look at the schedule replete with reminders and ask: So, what’s to be  done today?  I sometimes wonder: Is it just my natural habit and tendency to be busy? Anything—absolutely anything—can be used to bolster my sense of self-importance, including vows.

I don’t spend much time mulling this over, only I’m aware of the hairsbreadth path. The Breslov Rebbe, a very famous Jewish rebbe, said: “Life is a very narrow bridge, and the important thing is not to be afraid.”

Bernie didn’t like birthdays, especially his, which were often celebrated publicly. People meant so well, they loved him very much, but he would have preferred to go out to dinner, just the two of us, and that’s it. Instead, parties were organized, and he even made of a couple of big birthdays fundraisers for Zen Peacemakers.

His 55th birthday, as some know, was spent sitting by the Capitol with a group of students and associates, asking his question about what the next step in his practice is, his next vow. I wasn’t there with him, though over the years I’ve talked to those that were (including yesterday). It was the coldest winter in many years and I believe that work in the Capitol had been suspended. The group stayed in a big homeless shelter just blocks away. Every once in a while, I talk to someone who remembers that birthday.

Bernie had such a flair for the dramatic, for pulling people into his life and vision. He needed them. But in other ways he was so shy.

Many years ago, long before we married, there was another birthday for him in Yonkers, New York. The Zen Community of New York was then at its smallest size and only a dozen of us attended the party. At some point in the middle of it I looked up and there he sat, on a faded sofa, alone in the corner. I approached him.

“Happy birthday, Sensei,” I said (he was Sensei then). “How are you doing?”

“Not even your own birthday party, Sensei?”

He gave s short laugh. “That most of all. I’m not good at this,” and he gestured towards the few clusters of folks talking and laughing easily. “I never liked parties.”

He shrugged. “Sometimes I have to,” he said.

Not everyone felt at ease with him, but I did. Maybe that ease between us presaged a marriage that would take place years later. And at that time, when it didn’t have to be something public, I’d say: “It’s your birthday today. What do you want to do?”

He’d bark out a short list of restaurants: “Johnny’s Tavern, the Indian place in Northampton, the Japanese one we go to, the Chinese place in Greenfield—”

“Not that one,” I’d say, and then catch myself. “Okay, it’s your birthday, you choose.”

You can also send a check either to support my blog or to buy food cards for immigrant families to me :Eve Marko, POB 174, Montague, MA 01351. Please write on the memo line what you are donating to. Thank you.