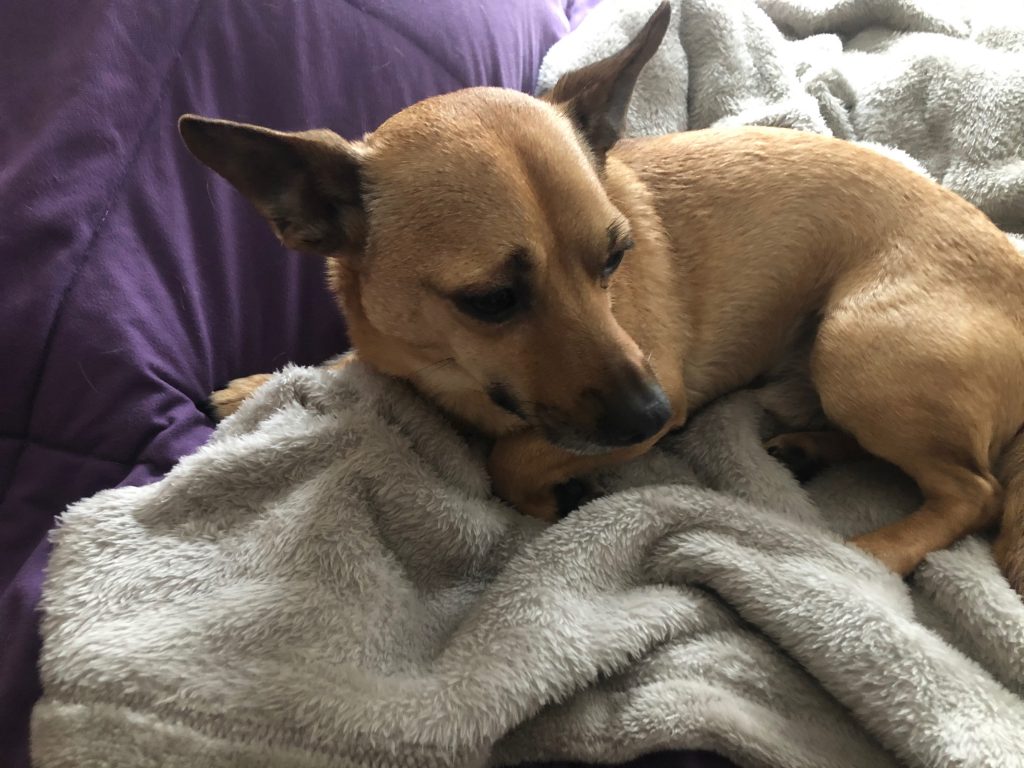 Henry’s sick; we believe he ate something that upset his delicate stomach.

The sweet thing about Henry is that when he’s sick, he wants comfort. When he’s unwell, he seeks love and attention. This morning I opened the door, and though he immediately jumped up on me, I could see he wasn’t his usual rambunctious self. He wasn’t bringing me toy monkeys and balls to throw, he wasn’t snarling when I pulled them away. He just wanted stroking and cuddling.

He whimpered and bent down to give a few licks to his penis, which he likes to do when he needs solace.

Later that morning his human went to work and I found him in her room. He likes to stay in his crate, but this time he was on her bed, resting on his special warm blanket. He wasn’t the usual maniac chasing squirrels and play-growling at Aussie. When I approached his bed, he lay on his back and opened up his stomach for strokes.

Aussie’s very different. On the rare, rare times when she’s unwell (usually because she ate things she shouldn’t), she curves herself into a ball and tells me to go away. This morning she, too, didn’t seem quite herself, but once we went out for a walk she found her mojo.

“What do you mean, you forgot the treats! You expect me to check in with you and come when you call–for nothing?”

“The Buddha, Aussie. He said that good deeds have good results, harmful deeds have harmful results. Trouble is, we can’t control when.”

Later in the day she lay on the futon behind my desk, keeping an eye out the window for marauding squirrels.

“Aussie, why are you in such a bad mood today?”

“Because I’m living with an enema of the people.”

“I beg your pardon?”

“I’m living with an enema of the people.”

“Do you mean enemy of the people, Aussie? And are you referring to sick little Henry upstairs?”

“To me? So let me ask you, Aussie, if I’m an enemy of the people, and if someone asked you to kill me, what would you do?”

“Or what would I do to Poopoo Pants Pence?”

“What would you do, Aussie?”

“Or what would I do to Kamakazi.”

“I’ll give you a hint. Her name ends with Allah.”

“She’s going to overthrow Biden very soon and take over. Ask me about—”

“I’m asking you about me, Aussie.”

“WHY ARE YOU EVEN THINKING ABOUT IT?”

“Let me ask you this, Aussie: Who feeds you?”

“Who gives you a nice warm home?”

“Who gives you walks and car rides and outings with Leeann and weekly marrow bones and makes you a blog star?”

“You do. You’re my Dr. Watson, I’m your Sherlock Holmes.”

“Holmes and Watson were dear friends! I do so many nice things for you, can’t I expect some kindness back? Instead, you’d consider taking me out?”

“You’re an enema of the people, what do you expect?”

You can also send a check either to support my blog or to buy food cards for immigrant families to, Eve Marko, POB 174, Montague, MA 01351. Please write on the memo line what you are donating to. Thank you.