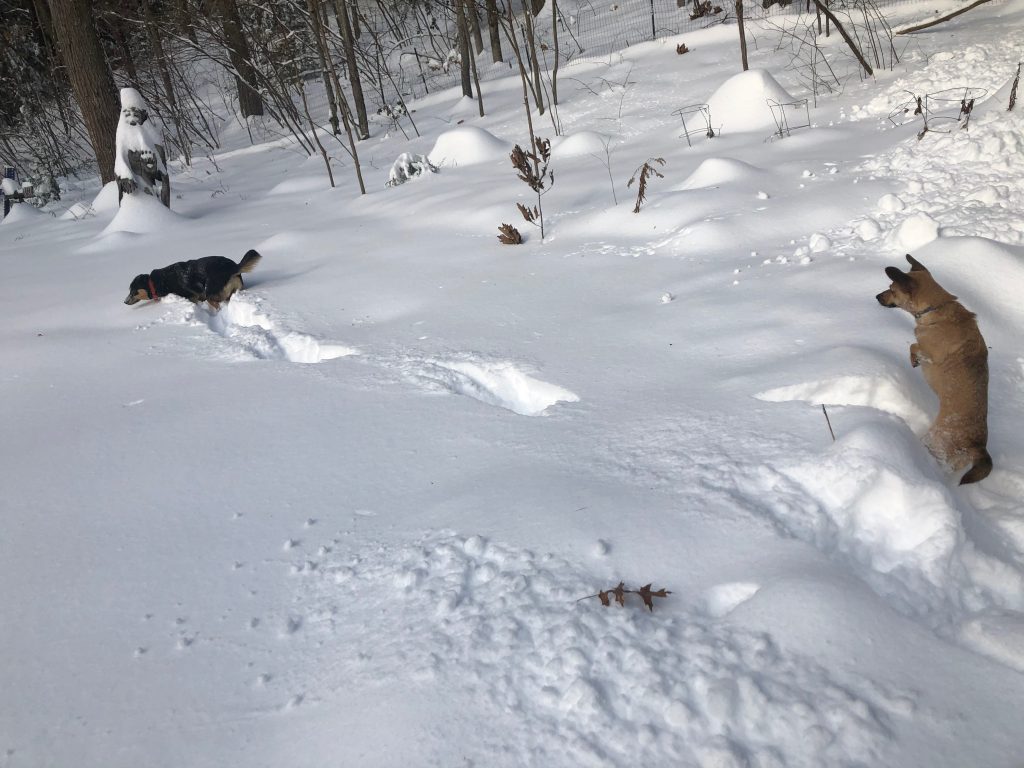 I watched Henry after the big snowstorm that hit us in mid-December and that was washed away on Christmas Day. We got some 16 inches of snow, not the most by a long shot (we’ve gotten as much as 3 feet), but enough to deter a small Chihuahua mix like Henry from venturing out.

Never having had a small dog before, I love getting to know Henry, who belongs to my housemate. He camps outside my door in the morning, whimpering till it opens, and then hops on his back legs like a meercat for his hugs. Aussie, on the other hand, sleeps downstairs till late. He walks with us in the deep woods, usually positioned between Aussie, up ahead, and me, and if he gets too close to a cold stream evil Aussie , with her two coats of fur, pushes him with her muzzle right into the freezing water and grins happily. He, a short-hair dog, shakes himself indignantly but continues to follow her. He has learned a lot from Aussie.

This time, the snow was deep. Aussie, originally from Texas, loved it. It was cotton-soft and light, she scampered in it for hours, scaring away the squirrels and creating deep indentations with her paws. Henry, however, stopped in his tracks at the garage door. He had a short path shoveled for him for excretory purposes, but outside was a winter amusement park that he didn’t know how to negotiate. Sixteen inches of snow is no small matter for a dog that weighs 12 pounds.

I was standing there, looking out at both of them, when Henry had his eureka moment. He watched Aussie running off in the snow and suddenly jumped into one of her tracks, bounded over the deep snow onto the next deep paw print, flew over the snow till he landed in the next, and kept on doing that all across the yard, jumping from one deep indentation to the other, hurdling over the in-between high snow like a horse.

After that, Henry had no more problems with snow. We went into deep snow in the conservancy nearby and he did the same across the wide, snowy meadows, flying over the snow from one of Aussie’s paw prints to another, having a blast. When he got home, he shook himself off, ran upstairs, jumped on the bed and went straight to sleep; he was a tired little dog.

Sometimes we’re most creative when we  encounter obstructions in our path. Most of us, I think, wish that our lives will go like a sitcom, predictable and a little giggly. They don’t, and that’s when they get interesting. Our individual creativity is challenged, we’re asked to come up with a different approach, the more unique the better.

It’s as if life is laughing at me and saying: I threw this your way, let’s see what you come up with. Show me what you got. Sometimes we need muscle and perseverance, and sometimes it’s a lightness and agility of being, like Henry, dancing from one of Aussie’s pawprints to the next, flying in the air.

That’s when I get that life isn’t about eliminating hindrances and obstructions; it could be about befriending them, studying them, and coming up with a new idea: I wonder what I could do with this. Henry could have gone back indoors and gone to sleep till spring, letting Aussie have all the fun. Instead, he worked out a whole new sport, and was happy and proud of himself.

You don’t have to wait till spring or the end of covid to renew yourself; you can do that right in the middle of the cold.

I remembered Bernie’s surgery to remove his squamous cell carcinoma from his brow, right on top of his protuberant nose. It had looked like nothing at all for a few months, but he insisted on waiting with the small surgery in order to be able to fly to Poland for the annual retreat at Auschwitz, and by the time we got there it had gotten really big and ugly. We got home and went straight to the hospital where they put him into full anesthesia to have it removed.

I was told it wouldn’t be a big deal, but when I entered the recovery room, I came to a standstill. His face was half bandaged up like a mummy, the bandages were bloodied and what was visible of his face was swollen and bruised. His face was horrifying.

I ran off to get some new meds for him, and when I returned his bandages had been changed but there was no missing the blood at the edges. His face looked like something out of a Halloween horror movie. This was just 10 days after Halloween.

He got into his wheelchair, saw his face in a mirror, and shook his head in disbelief.

“There are lots of kids in the reception area downstairs,” I told him. “Should we go scare them?”

This cheered him up. “Yeah!”

Down we went in the elevator, people edging away from us when they saw him in his blood-rimmed bandages and the dark purplish bulges. When we got into the big waiting area of the hospital, he swung into action. I wheeled him through and he began to growl softly as we passed the people coming towards us. They went the other way, staring in shock, and a few kids hung close to their parents.

“Stop doing that,” I  laughed. “You’re scaring them to death.”

He had such a good time.

I left him inside the main doors, went to get the car, and brought it to the front. When I came back in, he was sitting right in front of the doors as people came in, growling and snarling, his hands up in the air as if ready to pounce.

“Bernie, what are you doing?” I said, hurrying to get him out of there before someone called the hospital police.

He brought his hands down wearily and leaned back into the wheelchair. “When I’ scary, I’m really scary!” he said with some satisfaction.

We got into the car and drove home. 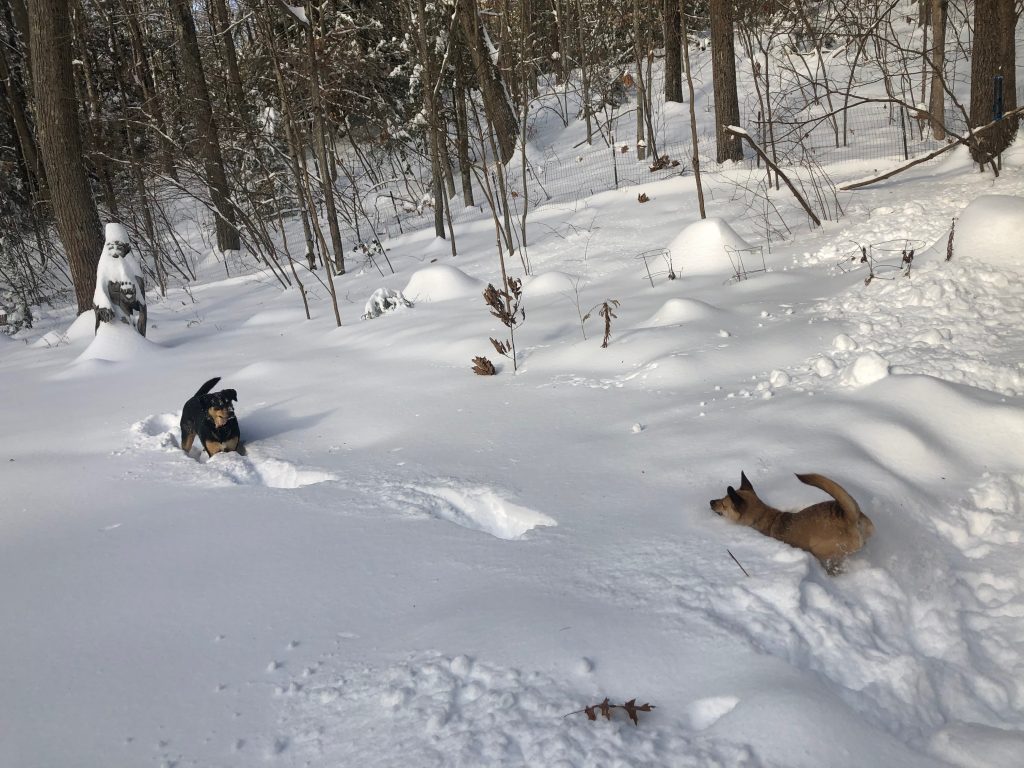 Donate to my blog     Donate to immigrant families