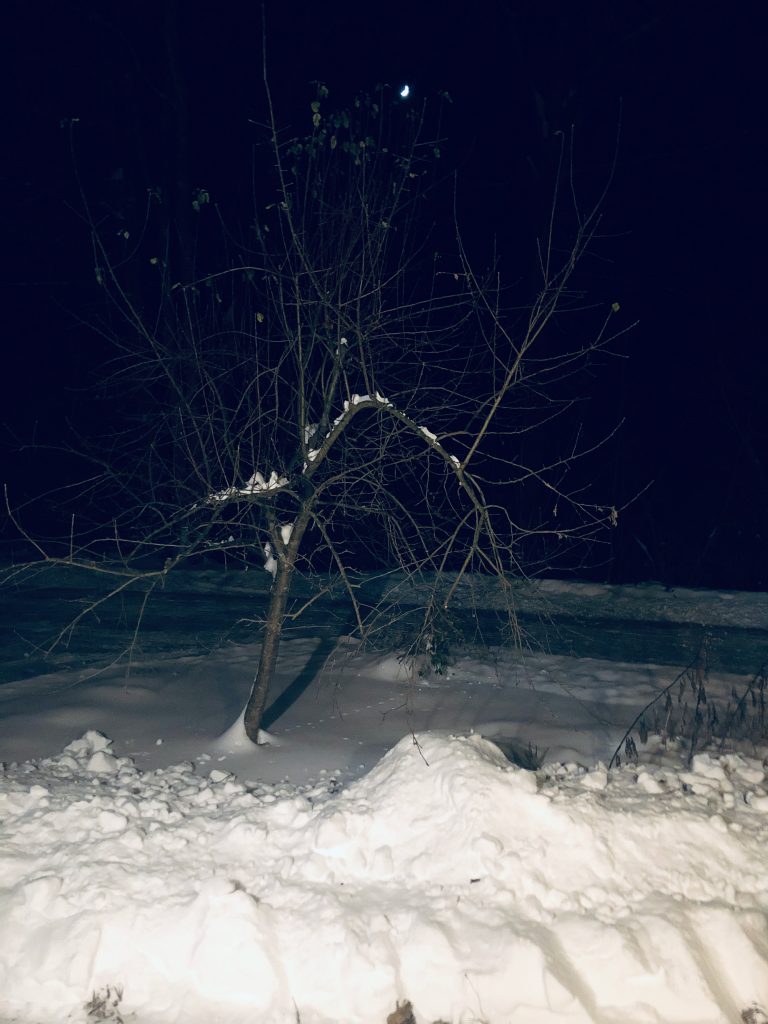 I sit here in a darkening Saturday afternoon, the day after the holiday. We had a spectacular rainstorm on Christmas Day. It began with a sprinkling on Christmas Eve and relentless torrents for most of yesterday. Aussie insisted on going out and dripped water all over the floor each time she came in; there was flooding everywhere, and practically all the snow—15 inches of it— disappeared by end of day, including all the snow surrounding the apple tree in the photo. I was grateful we didn’t lose power.

Here we are, I thought to myself, closed in by covid, and now closed in even more by the rain. Not only don’t we see family and friends, we can’t even go out to walk or play outdoors.

No matter how we look at it, this past year is still pushing us inside and inwards all the time, we can’t seem to avoid it, as if it’s saying: Don’t look out, look in. It doesn’t matter what you resolved or wished for 2020, your job is to stay inside.

I think of two things:

The first is my religious Jewish family, which, of course, never celebrated Christmas. More important, they tried to render it as invisible as possible in our home. It wasn’t considered good form to even say Christmas in the house, and while we never had much occasion to mention Jesus Christ, his name too was almost never mentioned. Not prohibited, just not considered proper..

For Jews, Christmas and Easter, Christianity’s biggest holidays, come with a lot of baggage. Historically, those were the times when Jews living in Europe and Russia during the Middle Ages and well into the European Age of  Enlightenment feared for their safety and lives. It was very common for Christians to go to church for worship, leave, and find joy not in a good holiday dinner at home but as a mob descending on the local Jewish community or ghetto, starting a spree of violence that often ended in plunder and murder. There are many documented cases of priests inciting their congregations to kill the Jesus-killers.

A strange way to celebrate the birth and later resurrection of a savior.

So, it’s no surprise that even a couple of centuries later, many Jews who’re still cognizant of that history—and especially religious Jews—view Christmas with suspicion. A good friend of mine, a Jewish woman who loves to cook for and celebrate holidays, wrote me that she doesn’t celebrate Christmas out of the resentment she harbors for  Christianity.

For years I had a hard time wishing people a Merry Christmas, even after they first wished it to me; I felt I was betraying my people who locked their doors in terror all those years ago when the church services ended, holding their children close and hoping that this year, at least, it will go by with no harm to them.

But, here I am, years later, and I appreciate the birth of a great spiritual leader and warrior. We had a very quiet day yesterday, but when my housemate invited me to join her in a Christmas dinner here at home a few days earlier, my immediate response was: “What can I make?” As a result, we had a magnificent dinner, I hadn’t eaten so rich in a long time: a roast beef, scalloped potatoes, snap peas, a berry crumble, wine. The dogs gathered by the kitchen stove, sniffing happily, causing us to trip over them. We worked out who had the oven first and in the end we filled up the dishwasher.

The rain pelted away: Stay indoors, stay inside. Don’t get distracted, don’t try to escape. Stay in.

And I remembered another Christmas holiday many years back, long before I married Bernie, when I lived in a cabin on my own. A good friend arrived for the holiday and I was very grateful for her company. We had a good time throughout.

In the middle of the day my brother called to ask how I was doing just as Linda  went for a walk outside. I told him I was hosting my good friend, he asked how that was, I said it was terrific, and then added: “You know, sometimes she talks too much.” We laughed, but even as I said those words, I knew it wasn’t really the case; Linda talked when we were together, but when I wished to be alone, she gave me lots of space. And still I said those words.

When she returned, I saw that her mood had changed. She’d left the house full of cheer, and she returned disgruntled. Immediately I thought: She heard what I said about her. But that couldn’t be, I then thought, she was nowhere near the cabin when I talked on the phone, not to mention that I talked in Hebrew to my brother. But something had changed in her, at least for a time, low spirits in the place of the high spirits she had when she’d left.

We became cheerful again a little later, but I thought to myself: She heard something. The leaves whispered it, or the birds, or the clouds. Somehow, she knew.

Why had I said those uncalled-for, unnecessary words about her?

Years later, Bernie told me he didn’t believe in secrets. “If you really see that we’re all One Body, then the world knows,” he said. “It may not know the details, but it knows something.”

I remembered this yesterday, and how sure I was that somehow, she knew. I thought of the unnecessary things I’ve said over time, and how the world always knew.