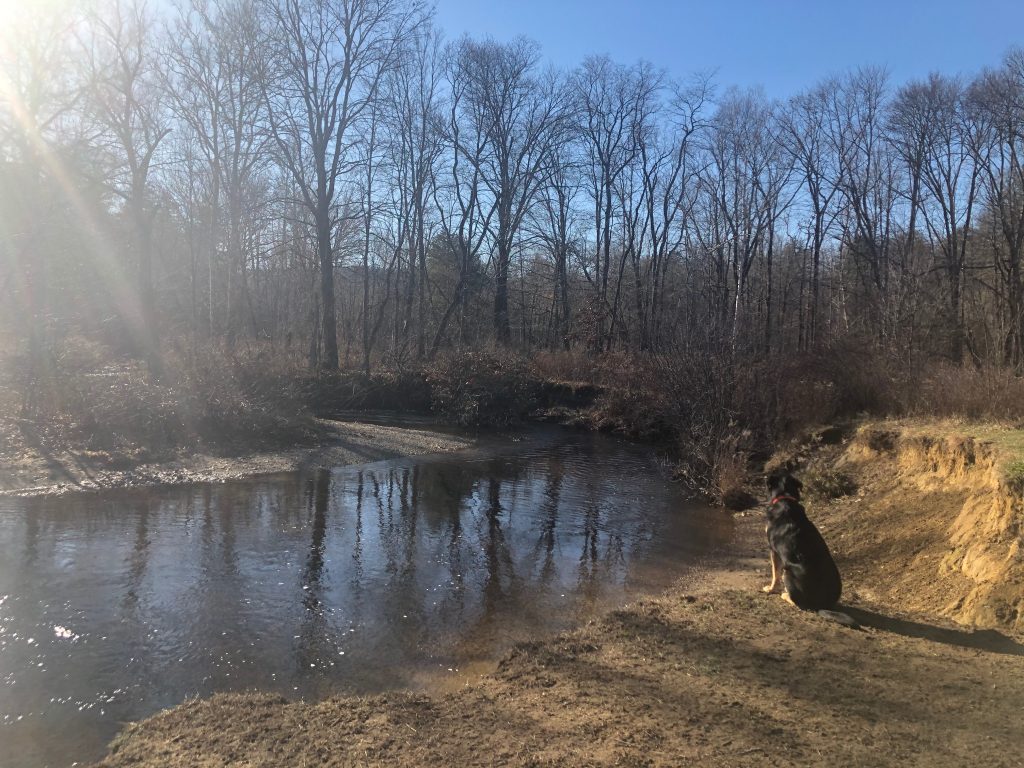 Yesterday I took Aussie to the weekly Sunday dog gathering in an adjoining park, only Aussie didn’t gather. All around her some 10 dogs of all shapes and sizes chased and jumped each other, pulling jointly on sticks or else chasing them into the water, while Aussie sat on the edge of the small promontory and looked out to the other side.

She’s not good with big, uncontrolled group. She’s defensive in the face of a group of dogs rushing out to greet her, almost all whom she knows. If there’s too much attention all at once she starts growling, clearly feeling some sense of trespass and even threat.

Aussie likes her boundaries; she likes her codes of conduct. For that reason she has the most trouble with puppies still learning the tricks. Not for her the constant jumping and running, she needs a slow, respectful approach, otherwise it’s as if she’s saying: Get away from me, peasant. Come back when you get a little more education.

Eventually she’ll identify one dog, usually her size or a little bigger, whom she’ll play with (her favorite lately is a large black dog called Cheddar), growling at whoever wants to join in the fun. And sometimes she gives up on the whole scene and sits aloof, contemplating nature, llfe, nothing. Many times I wonder why I keep on bringing a “nongatherer” to a dog gathering.

I finished the book Tokyo Ueno Station last night, promptly opened it back to the  first page and started reading it a second time. That happens very rarely. The book, by the Japanese writer Yu Miri, won the National Book Award for best novel in translation. It had come out in Japan six years ago and in English this year. It’s a small novel about a homeless man who died and now haunts Ueno Park in Tokyo, next to the railway station, where he spent his last years.

Originally, he’s from the area of Fukushima, and while the nuclear disaster there is barely alluded to, it casts a big shadow over the book. He has lived in poverty his entire life and he watches as his peers get ejected from the park whenever a member of the imperial family arrives, pulling carts with all their belongings elbow-to-elbow with other pedestrians enjoying the park, its zoo, monuments to the past and museums, gossiping about their families and homes that they didn’t have to leave behind.

At the train station people stand, waiting to get to their destinations, though you wonder if they aren’t going in eternal circles: “The train now approaching Platform Two is bound for Ikebukuro. Please stand behind the yellow line.” These announcements are repeated time and time again.

“Is this a depressing book?” a friend would demand whenever I recommended a book for her reading pleasure. She used to say this in an accusing way, as though depressing books were the only ones I cared about.

It’s a jewel of a book, I would tell her if she asked this question now. It’s beyond sad or glad. The writing is bewitchingly simple and yes, it does tell a story of the poor and dispossessed that’s as old as the hills. But it’s magical too, because the narrator, back from the dead, is still trying to understand the kind of life he lived. Isn’t that what we all do?

In a funny way, Kazu, the narrator, is completely selfless. He goes to work in hard, menial jobs in fishing and construction from adolescence in order to provide for his many younger siblings, managing to send some of them to college. When he marries and has two children, he still has to live away from home because the jobs are closer to the big cities, returning home twice a year for short periods of time (at some point he calculates that out of 37 years that he’s been married, he’s actually been together with his wife less than a year).

He sends back money every month, feeding his elderly parents, wife, and children, with the result that his children don’t know him and he doesn’t know them. A kind, even noble man who gives up his life for others, suffering the losses of life and doing everything right, hosting funeral ceremonies and honoring the Pure Land traditions of his family, he rarely feels an authentic connection to anyone.

He has never intended to be a good man, he feels he lives a choiceless life, doing what is expected of him as a son, a husband, and a father. He doesn’t know himself at all.

“I did not live with intent; I only lived,” he says in the beginning.

What is it to live without intent, without a meaningful vision? What is it not to be able to wrest meaning from our lives? In Kazu’s case, namely the severe hardship in which he grew, without meaningful job qualifications or education, living day to day in the meanest of circumstances—how could he imagine that there’s something other than survival possible?

I’ve met other people far, far more prosperous, who have no sense of what it is to live with intent. They roll from one stage of life to another—child, student, adult, partner, parent, old person, death—without intent, without some unifying story, without vow. At the end they feel as though their life was happenstance and wonder what it was all about. A close friend of mine went into deep cynicism as she got older, laughing at a lifetime that hadn’t been one of suffering, but rather of meaninglessness.

I watched Aussie sit on top of the small promontory looking out, a quiet presence in the center of havoc. Not for her joining the hustle and bustle, the socialization and play. I was pretty sure she wasn’t busy figuring out her life, but the picture spoke to me. Without intent, where are we going?

Donate to my blog          Donate to immigrant families