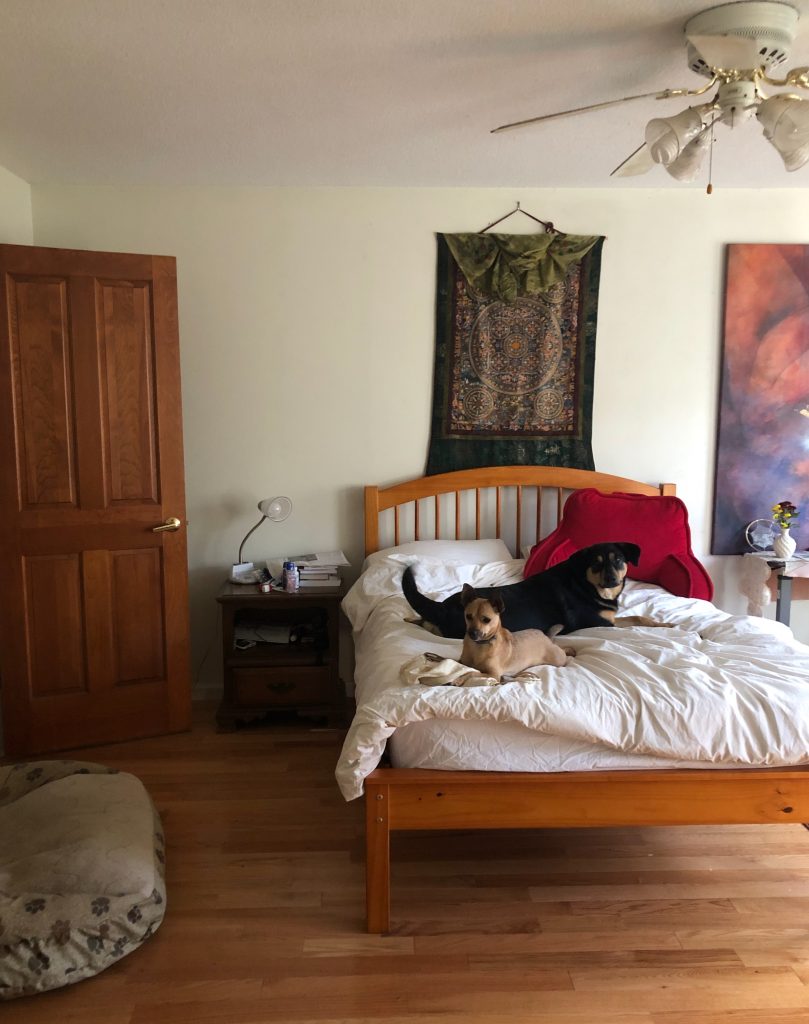 Every Sunday I give Aussie and Henry marrow bones. This tradition started long before either was born. I take the bones out of the freezer on Saturday night to defrost, and by Sunday morning both dogs are circling that particular corner of the kitchen, Henry getting up on his hind legs and hopping around like a meerkat. It’s all we can do to get them to eat their regular food first.

Yesterday I took out an enormous bone and gave it to Aussie; it was so big she could barely take it in her mouth. Henry got something smaller and ran upstairs with it, where he could eat it safe from interruption. He needn’t have worried, Aussie put hers down on the rug under the dining table, her favorite perch. As usual, she started the job while standing on all four legs and licking the bone from all sides, then got down on her belly and down to business, holding the bone with one paw as she began pulling bits of meat off, after which she would be going after the marrow. I imagine Henry did something similar upstairs.

One or two hours pass. I’m seated at the dining table having soup. Henry has come down with his bone, puts it on the kitchen floor and sits next to it. Aussie, who’s been gnawing loudly for a long time, stops.

After a while I notice how silent it is and look at both dogs. Aussie lies under the dining table, her big bone (now slightly diminished in size) next to her. She’s staring straight at Henry, who’s seated on his haunches some six feet away next to his bone. They look at each other like this for at least ten minutes (If only I had a camera!).

What’s going through their minds? I don’t know, but I can guess. It’s time for the post-chewing bone exchange. Aussie, having finished her bone, now would like to get her teeth into Henry’s. Henry, who has finished his, would like to get his tongue and tiny teeth into Aussie’s. They do this exchange every time, but at this early stage of the game, each is loath to give up his/her asset, his/her bone. They have to give it up in order to go for the other, but they’d rather keep their bones and go after the other.

No one makes the first move, but don’t think nothing is going on. Diplomacy is happening even as they stare at each other silently.

Eventually something will happen. We’ll have a walk, or one or the other will be called to something else. They both may run barking outside because someone’s walking up the road. At that point one will get the other’s bone, and after that the other will get the bone she/he had been eyeing for a while, and the compromise is reached: You get mine, I get yours. They may have a small fight about it, but basically, it works out.

I watched this process yesterday and wondered why it is that Aussie and Henry have figured out how to come to an agreement about the sharing of assets and wealth, and American humans can’t do the same. We start out just like them—we want it all. We want what we got and we want yours, too. But even Aussie, four times bigger than Henry, doesn’t want a fight. Maybe she has a sense that it’s unfair to hover over both, who knows? If so, she’s ethically a lot more advanced than many of us humans. Regardless, in the end, after glowering and vigilance in turn, they come to agreement and exchange one bone for another.

They compromise. They do this every single Sunday.

This is when I ask myself whether evolution in reverse is possible. Haven’t we gotten way too smart for our own good? How do we reverse our engineering and see things a little simpler? How do we relearn the art of compromise, which is what our form of government is based on? Without it, the government we have will simply not work.

Could we possibly stare at each other across seven feet of kitchen and dining area—Trump voters and Biden voters, Democrats and Republicans, Progressives, Conservatives, Moderates, and what-have-you’s—do our posturing, glowering, baiting, and snarling on our respective networks and social media, and then come to some compromise where each side gets the bone they want?

Don’t forget, the bones the dogs get the second time around aren’t as fresh as what they got the first time, they don’t have the meat and all the marrow they had before they’d been chewed on. They’re getting second-hand bones, like the used clothes I used to get at the Salvation Army which somebody had worn first. But they get something. They get some remaining gristle, some spots red from blood, and odds are there’s still marrow left inside the bone that you have to burrow deep to get. Best of all, they get the flavor and smell of the other dog, its teeth and spit are all over the used bone, and I believe that makes the bone even more luscious for them this second time around.

If we weren’t so bent on winning at all costs and having it all—Wait till 2024!—we might find some satisfaction in getting something that has the imprint of the other. Something that has been argued about, maneuvered from a House committee to the House and from a Senate committee to the Senate, then back to a joint committee for compromise, then back to House and Senate for their approval, then up to the White House for signature—could you imagine what all those smells would do to the dogs? They’d be all over each other sniffing in curiosity and excitement, trying to decipher who’s who and what’s what.

We don’t want all those smells (Anything Mitch McConnell agrees to I’m not interested!). We want just our smells. Only we don’t get those smells either, we get nothing. We’re stuck in those 10 minutes of staring each other down, only in our case it’s been lasting for years. We’re ready to wait, because we’re sure it’s only a matter of time before we get it all. Meantime the virus hits, climate change hits, fires and floods and climactic gaps between rich and poor have hit, and we’re still staring at each other, waiting to get the other’s bone.