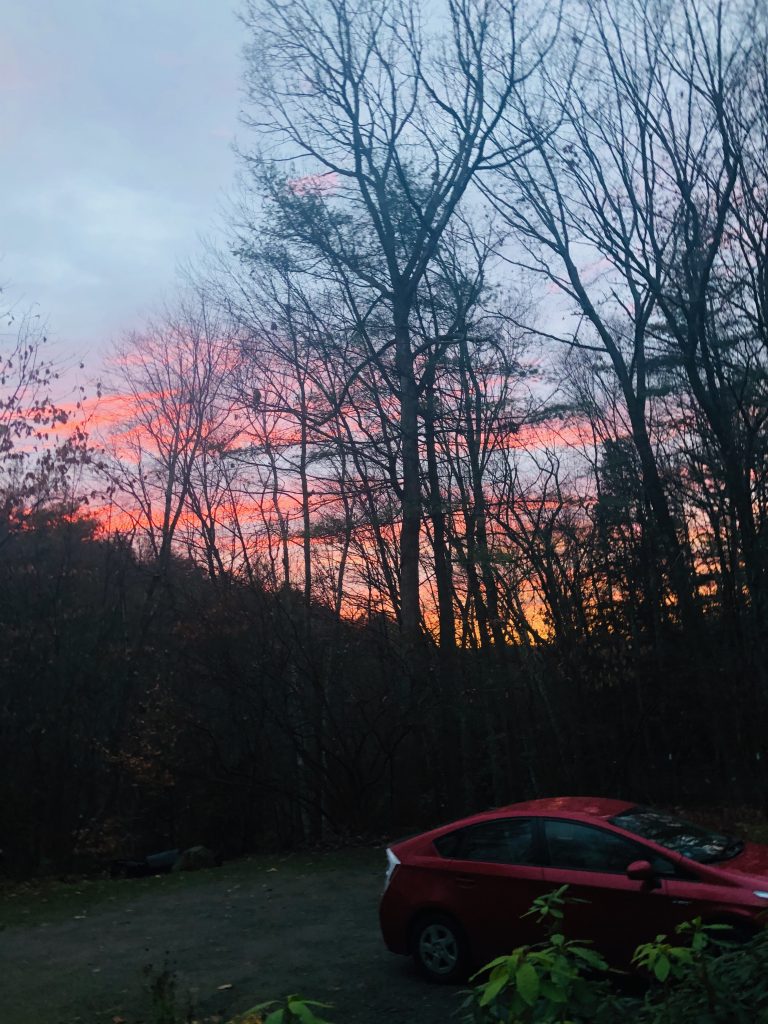 About a week after our elections I went to a local garage to make an appointment for my 9-year-old Prius, which needs work. I entered the office wearing my mask, and immediately noticed that the man at the desk did not. In our part of the country that’s highly unusual, probably illegal.

He looked up at me as I approached and asked how he could help. I described the work I needed.

“I can’t hear you,” he said, so I raised my voice, speaking through the mask.

He informed me that they were scheduling now for the week of Thanksgiving. That’s fine, I said. We made a date and I walked out the door and to my car.

A Trump voter, a voice inside said. Before I could stop myself, I was off to the races, chugging along on the Trump Express. Quicker than I can write this, I made up a Trump Voter list customized to the man I’d just left:

And one more check: You’re insane, I told myself. Check.

That’s my only defense, that as I watched these thoughts flash in my head quicker than water bubbles, I could still label them for what they were: Insane. Tying the most disparate dots together to produce a story or picture that had as much proof and credibility as how Joe Biden won the election through fraud.

I’ve written here before that I never thought much about Trump the man, I thought he was not sane from the get-go. I couldn’t forget that this was the man who liked to have his picture put on the front cover of the New York Post with another gorgeous woman on his arm even as he was married, ignoring the impact and humiliation of this on his wife and children. New Yorkers (of whom I was one then) knew he was a classical narcissist, and I’m personally not that interested in crazy people (unless it’s me). But I am very interested in the impact they have on other, saner people.

When I think of the leaders I resonated with, I think of Martin Luther King, whose life and speeches I studied over a period of years, ditto with Gandhi. We seemed to share a frequency. They lived their lives, a woman reads their words years later and her heart surges and the blood pumps: Yes! Yes! That’s how I feel!

Sometimes it wasn’t the words, but a picture. I studied the life of Abraham Lincoln, too, and though I felt deep ambivalence about some of his actions, including his offers to the South to keep their slaves till 1900 just to keep the Union intact, there was something of the man that always moved me. I liked to picture him on his horse, leaving Mary Todd behind and traveling as a lawyer throughout Illinois’ Eighth Judicial Circuit, so deeply engrossed in the book he was holding that he’d let go of the reins and lose his way. He’d suffered great losses—in that sense he reminds me of Joe Biden—and there was a loneliness about that figure on the horse, deep in his book, that stays with me.

Donald Trump is also a study in resonance. When he talks of how this country becomes great when it kicks out immigrants and keeps minorities and women in their places, that it should make rooms for white supremacists, alt-right militias and anti-Semites, I go No! No! No!, but it’s still a kind of resonance, say a resonance in reverse. It hits me somewhere deep. It evokes denial and even self-loathing, a call to all the angers and rages I’ve felt in my life. He’s my Northern Star for hate and fear, for some old dread that perhaps comes out of being two generations away from a Holocaust, from haunting memories of harsh early years of life.

That’s when I get on the Donald Trump Express.

Leaving the garage, I mentally labeled the man I’d just talked to—someone I’d never met in my life nor exchanged political views with—a Trump voter. A Trump loyalist, maybe a Trump lover. Okay, it wasn’t accompanied by hateful feelings so maybe that wasn’t the Trump Express but more like  the Trump Local, slower and a little more rational, taking me to the same destination as the Express only by a more circuitous route. Either way, I end up in the same place, in stereotypes and stories that carry the same implacable ending: He’s wrong! He’s bad! And even: I suffer because of him.

I shudder to think of what makes any person a human tuning fork for so much fear, or a radio tower that emits constant signals of alarm and hate. What a terrible karma, I think  to myself; there must be suffering at its core. But those signals are powerful and unambivalent, and we resonate strongly either with them or against them.