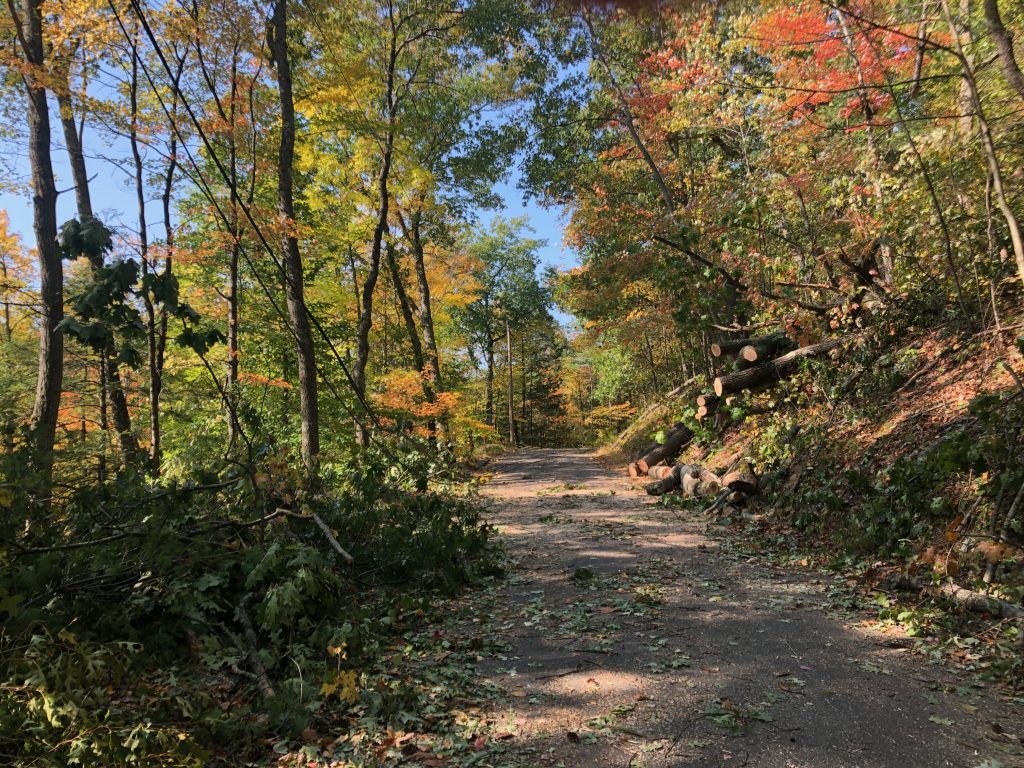 “Where are you going?”

We got our electrical power back at 5:15 this morning. Last night they were still working on installing new utility poles on our devastated road. I counted some 5-6 events, as they call them, trees and utility poles that fell across a road only a mile long, with lots of overhead electrical lines down. That doesn’t include the trees that crashed along the sides. It was as though a mini-tornado had touched down on one end of the road and rushed through to the other. Police barriers barred access to the street in both entrances.

“We’re putting in new poles, and then they still have to bring the linemen to put up the new lines,” one of the Eversource people told me. “We’ve been here all day.”

That was at 7 pm Friday evening. They must have worked all night, because everything came on at 5 this morning. We’d been without electricity, water, heat, and kitchen utilities for 2-1/2 days.

In the late morning Aussie and I went into the forest, following a path I’ve walked for some 18 years. But this time I couldn’t find it. Tree limbs and branches had fallen, a carpet of twigs concealing the usual signposts. On the way back I got lost.

“How are we ever going to get home, Boss?”

“I don’t know, Auss. Wherever I go, the way is barred by lots of branches and brambles that weren’t there before. Do you ever have these days when you try out different things, and none of them work?”

“Follow me, dumb human, I’ll take you where you have to go. I always know my way. Ow! What was that?”

“An acorn fell on top of your head. Like I said, Aussie. I’m tired. I slept with my clothes on under a pile of blankets the past 3 nights because it was cold—speaking of which, Aussie, in the middle of the night I felt my sheets and they were full of sand. Now who did that?”

“Probably dumbass Henry, Boss. You know I don’t jump into your bed. I never cuddle!”

“Are you sure it wasn’t you, Aussie? You’re the one who likes to get wet and roll on things.”

“I told you, Boss, I don’t roll on your sheets. They’re not that interesting, unless you poop on them.”

“Aussie! But it is interesting that you love poop so much.”

“Look at how much I love being out here with you in the sun and surrounded by gorgeous leaves, Aussie. I’m just as happy as can be.”

“No you’re not. You’re never happy unless you see suffering.”

“You should call yourself Poopisattva.”

“Tell me, Aussie, why do you like to smell and roll on poop?”

“Because it’s not just poop, Boss. The smell jams my senses full of information—who left it, what they ate, how they’re feeling, who they’re voting for. All those things are in poop!”

“Exactly, Aussie. And human suffering is no different. It’s not just that somebody is homeless or doesn’t have food on the table. Each person is different, each person has a story. Like the woman on Thursday who came to get a food card and a carton of tortillas and told a story of why she left Guatemala. Or the young man who is the sole parent for a child because his wife left him for another man. Behind the label of illegal immigrants there are stories. Behind the word suffering is a unique human heart beating with its own energy, its own hopes for the future. I don’t see suffering as bad or smelly, it’s our story as humans.”

“It’s like what happened now, Aussie. We lost power, we were cold, we couldn’t cook, didn’t have hot food, I was tired. But it occurred to me that this gives me a peek at what so many others go through day after day for most of their lives. A lot of the immigrant families also had no power, and sometimes their utilities are shut off because they can’t pay their bills.”

“No Aussie, don’t blame this on spirituality; I’ve been this way all my life. I used to do that when I was a kid, thinking about what it was like to grow in the Holocaust, what it’s like to grow up Black. My father used to say: Why are you bothering with all these things?”

“Your father was right.”

“I always thought of what my mother did as a teenager, taking risks to save her family from the Nazis and living through extraordinary times. She was a real hero, and what am I doing with my life? Talking to a dog.”

“You could do worse.”

“The point is, Aussie, now I realize that that’s how my imagination took root. It imagined how I would have acted back in her time, and what I can still do, how I can still relieve suffering. See?”

“Everything I do is connected to my imagination: my Zen practice, my creativity, my writing, visions of what life can be. Suffering led to imagination, and imagination opened up a whole new world for me, see?”

“What are we doing at the creek, Aussie?”

“You took the wrong turn, Boss. You always do.”

“Why didn’t you say something, Auss? Now we’ll never get home.”

“Look at it on the bright side, at least we’ll have water.”