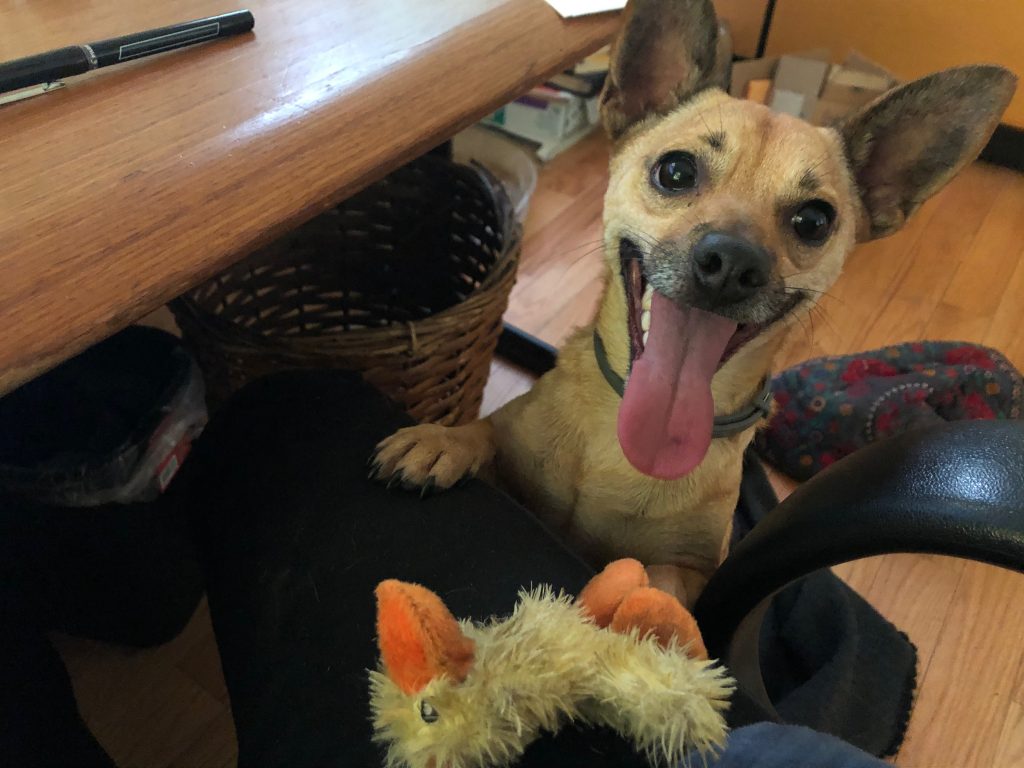 “Henry is a 12-pound mixed dog who’s moved in with his human. They’re taking the front bedroom upstairs.”

“That’s a dog? What are you supposed to do with it, eat it?”

“Why don’t you try throwing it to me, Boss? If it makes noise maybe I’ll fetch it.”

“That’s a terrible thing to say. Actually, I’m very excited to have Henry here, Auss. It’s the first time I have a small dog in the house. I’ve wanted to try one for several years and here he is, though of course he doesn’t belong to me.”

“Why does his nose constantly nudge the blue ball up between your thighs? Does he think you’re missing something? Doesn’t he know you’re a she?”

“I think he wants me to throw it, that’s how he gets my attention, Aussie. He did the same thing with the yellow squeaking duckie that Harry left behind.”

“Are you loving it?”

“Enough, Auss. Henry’s a lovely dog and you’ll have to get along with him.”

“I don’t want to get along with him. Did you ask me if I wanted another dog in the house,  Boss? Does anybody care what I think?”

“As a matter of fact, Aussie, I introduced him to you beforehand and you seemed to get along fine.”

“I was looking forward to finally being an only dog after Harry left: get all the left-overs, sleep wherever I want, not ever again have to share! And now this—a mini-maniac pushing a yellow squeaking duckie up your—”

“Boss, I have felt canine non grata for a long time now!”

“You’re spoiled and self-indulgent, Aussie. Next thing I know you’ll be off to the White House again.”

“Do I have a choice? Have you looked at the steps to the door lately?”

“OMG, Aussie, look at all the Amazon boxes full of school supplies for immigrant children. It looks like they’re getting everything they need—”

“I believe we sold out the Amazon Wish List. Can you believe that, Aussie? It sold out in less than a week. Doesn’t that give you a good feeling, Auss?”

“I tell you, Aussie, people are amazing. It took me a long time to recognize how generous they are, and how generous life is.”

“Henry managed to slip through, but then he’s a quarter your size.”

“I have to open them all, repack them and put them in my car, Aussie.”

“What is it with you, Aussie? It’s your home, your front steps, your food, your back seat. Henry needed a home so he’s here. Children need help with school supplies so many kind people got them what they needed. Why can’t you learn to share?”

“If I learned to share, I’d be a socialist. You want me to share, send me to China. In fact, I think Henry is a little Chinese, don’t you? I should have known, just another illegal immigrant–in my house!”

“At least he works for a living, Aussie.”

“He chases balls and duckies. Do you do that?”

Oh Aussie, I don’t know how much longer the two of us can share the same house. It’s getting so partisan!”

“Henry has to leave. No miniature sex maniacs allowed here.”

“Nobody’s leaving. I love it that he’s different from you. His bark is different—”

“—his personality is different, his energy level, he looks different. You know what Bernie used to say.”

“He would say that we’re all different plants and flowers in one immense garden. The garden wouldn’t be the same if even one of us goes.”

“Not another spiritual answer.”