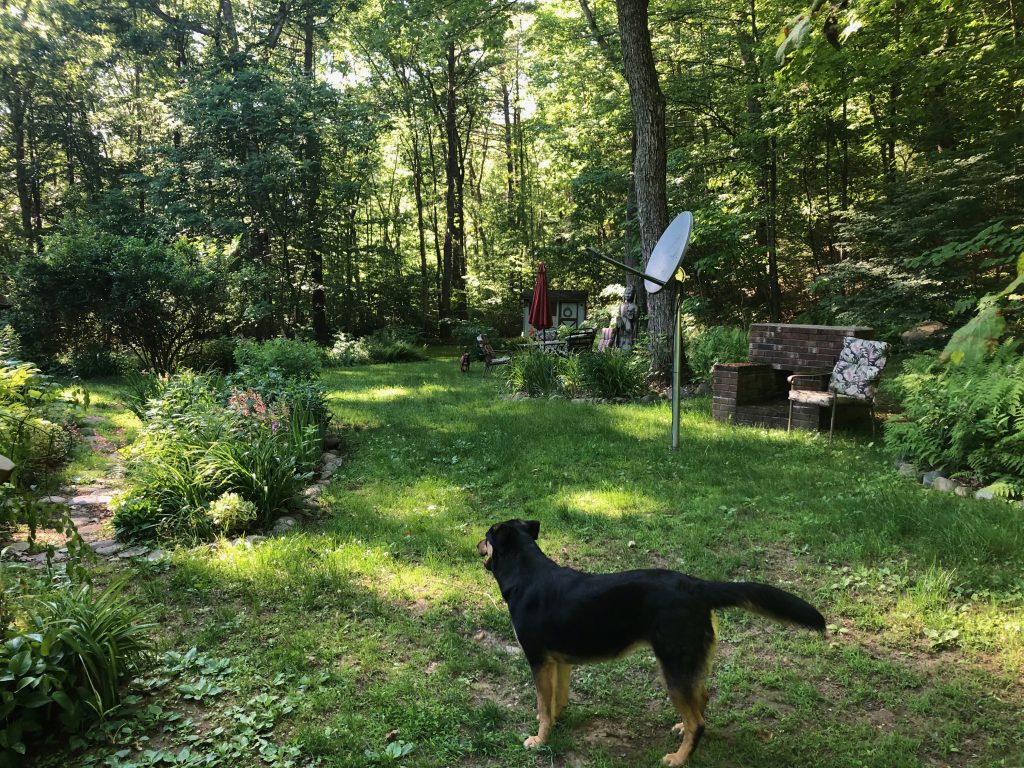 “Of all times, why are you taking me on a ride now? We had all morning and you didn’t make a move.”

“I have the time now, Aussie.”

“You know what I just left back home? Emma’s frying up bacon!”

“I’m taking you to the Farmers Co-op, Aussie, where I get your dog supplies. I’m getting you your food, your treats, all kinds of wonderful things.”

“You took me away from bacon for the Farmers Co-op? You want to compare dry kibble—”

“—with bacon frying on the oven? Do humans have a nose?”

“Don’t worry, Auss, she’ll leave you some of the bacon fat.”

“And what about the pan? How is it going to get clean if I don’t lick it up? Speaking of which, do I get paid for all this housework, for licking dishes clean before they go into the dishwasher? I do not!”

“What’s gotten into you today, Aussie? You’ve been complaining nonstop.”

“Things change all the time, Aussie. Take a look at the Washington Redskins.”

“Is that a new kind of dog treat?”

“It’s a football team from Washington, DC, our nation’s capital, that for years called itself a name that insulted Native Americans, the original people who lived here. Year after year, at the end of another losing season, I’d send them an email: Change the name! And guess what?”

“They finally changed their name, Aussie! After swearing up and down they’ll never do it, they did. See? Things change after all.”

“What do they call themselves now?”

“The Washington Football Team, at least till they come up with a new name. You know, something inspiring. This is American football, Auss. They’re probably looking for something that sounds courageous, warrior-like, and tough.”

“What about the Washington Dogs?”

“Not sure about that, Auss.”

“Not all dogs are courageous or warrior-like. Harry was. Remember when the big bear came to the fence? You politely withdrew, but Harry ran right up to him barking like crazy, protecting the house. He went nose to nose with the biggest bear I ever saw. Harry was brave, Aussie.”

“Harry was a dummy. What about Washington Bitches?”

“You know, Auss, naming things can be tough. You should have seen what happened here when they wanted to change the local sports teams’ name from Turners Falls Indians to something less controversial. They went through a whole process, held a referendum, listened to everybody, but what an uproar that caused—right here, in progressive Massachusetts!”

“That’s a famous question, Aussie. There’s a lot in a name. We get courage from names. We get inspiration, dedication, physical and mental toughness.”

“I think you should call your Zen group Green River Zen Aussies.”

“Zen Peacemaker Pooches? I like the sound of that. Do you think they’ll be offended?”

“Some Zen Peacemakers may be offended.”

“I’m not talking about them, I’m talking about the pooches. Indians don’t want to be used in a name, why should pooches? I know! Zen Peacemaker Trumps! It’s flamboyant, it’s charismatic, and it’s flashy. And he won’t mind at all, he loves having his name out there.”

“I’ll propose it to the board, Auss.”