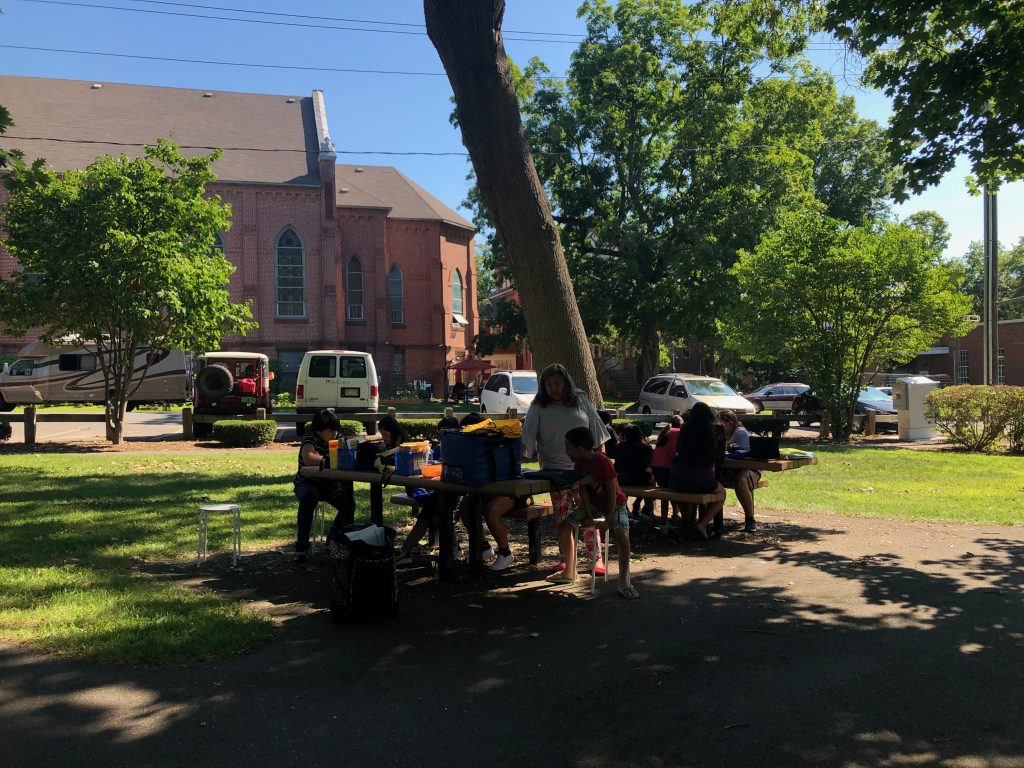 Yesterday I went to the bank to pull out cash for today’s meeting with immigrant families. That’s in addition to $750 in food cards.

“How much do we need?” I asked Jimena the day before.

She figurds it out on the phone. “Can we help Elena with more rent money?”

That’s the new mother who faced eviction right after giving birth, her husband deported while she was pregnant. Elena is not her real name; she has been unable to work all this time, especially since most of the jobs are on the farms during a terribly hot and humid summer. She still can’t work, has to take care of the baby..

We received generous gifts to help Elena with her housing—thank you to all of you who were touched by her story. It didn’t just depend on us.

I am learning to appreciate Jimena’s broad array of skills that she uses on behalf of this community. Even as a little girl, she accompanied her mother across the Ecuador-Colombia. Her mother would sew clothes in the day, drive across the border at night and sell what she’d made the next morning. She, traded everything from clothes she sewed to food and other items. One result is that Jimena is in possession of ,negotiating skills I’ll never have. Now she uses those skills to make deals with utility companies and bargain down landlords. So even as money came from you for Elena, Jimena pestered community agencies and, with our help, put $2000 together to get rid of the eviction threat.

But that’s for past months. Life goes on, rent goes on, and July is practically done. I see over and over again how little low-cost housing we have in our country. Even in Franklin County, the poorest county in Massachusetts, rents are high. In the low-income town where I meet Jimena, an apartment with just a couple of rooms rents for $800 per month. Some of you readers may be accustomed to big-city rents, but given the pay rates around here, that’s exorbitant. So families crowd into these apartments, which can be helpful and destabilizing all at the same time.

“And then there’s Clara (not her real name), and she needs money to pay off electricity.”

In my personal finances, which were quite narrow, I always insisted on being on top of bills, but in my work with Zen Peacemakers and Greyston we often ran out of money. I remember the pressure of invoices coming in: insurance, mortgage, utilities, taxes, and of course, payroll. They come in like a relentless drum beat. You’ve paid off one and the next one has just come in today’s mail, and another will come in tomorrow.

After I went to the bank I took Aussie out of the car (she gets a biscuit from the bank every time) and walked over to the adjoining park where Jimena was teaching remedial English to young children in the summer. I told you, that woman can do anything. Her son was there, too, helping them use computer demos.

There are two tables of children and they look wide-eyed at Aussie. One brave little boy comes over and pets her gingerly, like fearful people do, holding his hand on top of her brow and then slowly bringing it down.

I try to explain that that’s not the best way to approach a dog you don’t know. “How would you like it if someone raises a hand on top of your head and you can’t see what’s coming?”

Aussie is not a Lab, not composed and peaceful all the time, and she looks up nervously. She wags her tail. One after another, the children come to pet her. I sense their nervousness, I sense hers.

I remember bringing my Golden Retriever, Woody, to Yonkers, New York when I worked at Greyston. African American families have a bad history with dogs, and whenever we walked in the park the parents would warn the children: “Leave that dog alone!” But the kids couldn’t help swarming all around Woody, a few even trying to ride him; Woody good-naturedly took it all in stride.

Here, too, the older folks avoid Aussie, but the kids can’t wait to pet her. All except for a young girl, nowhere near Aussie, who bursts into tears and runs into the arms of an older girl.

“She’s afraid of you, Aussie.”

“We’re all afraid of something, Aussie.”

We’ve arrived at a perfect time, Jimena reassures me, and asks the children to hold up the sheets they’re working on. They colored in a dog. On top, it says: That’s a big dog!

I don’t want to get in the way of the class so we walk away. Jimena lines them up in small rows,  puts on a song on her laptop, and they start singing along.

Inside the car I practically squeal in excitement. “You were great, Aussie!” I’d never seen her interact with fearful children before. “You were such a good dog! Such a good girl, Aussie!”

Aussie’s resting the front part of her body on the arm rest between me and the passenger seat, grinning from ear to ear. We’re a team, and she knows it.

“Want to be a working dog, Auss? Want to be an ambassador of good will to children everywhere?”

Please support immigrant families. You can do this using the Donate button below, which will take you to PayPal. Please make sure to write “Immigrant Families” or “Food Cards” in Add a Note. Or if you prefer to send a check, send it to Eve Marko, POB 174, Montague, MA 01351, and please write “Immigrant Families” or “Food Cards” on the memo line. Many, many thanks!