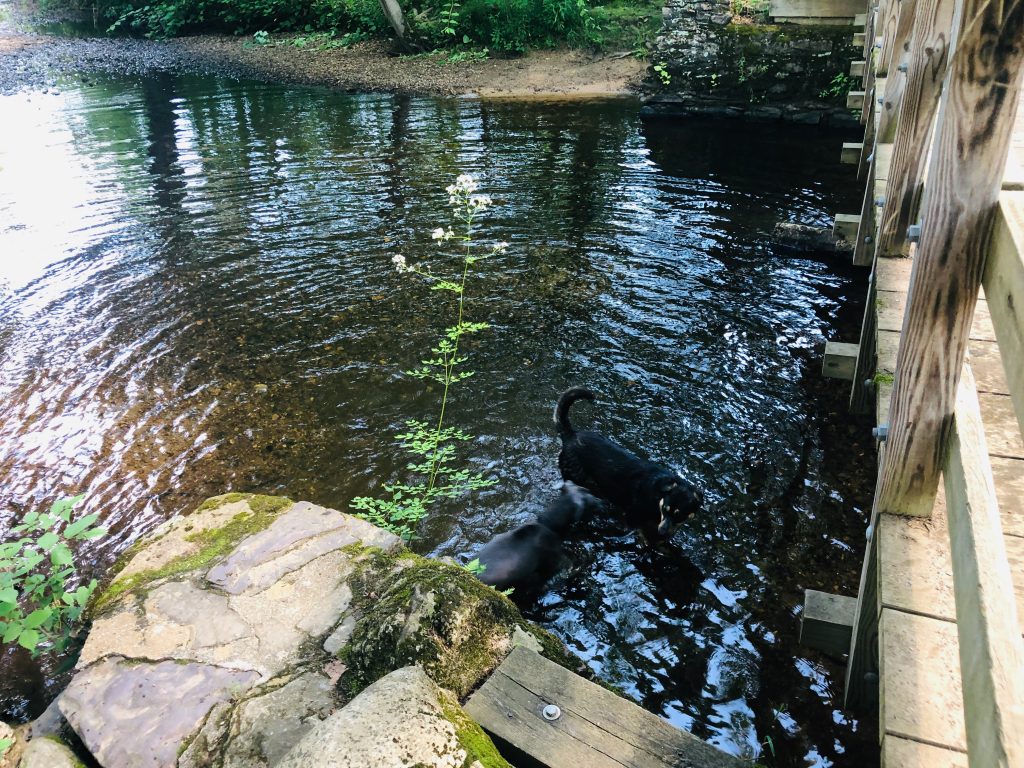 When I decided to find a new home for Harry, I started writing up an ad.

“What should I write about you, Harry?” I ask.

“One out of four isn’t bad,” says Aussie.

I find it a personal calling to live in the intersection of opposites, to live in the gap while finding some way to connect between highly partisan, even warring sides. It’s become a bigger challenge lately. We seem to be creating rancor and do-or-die principles out of anything and everything.

I remember crossing into New Hampshire from Massachusetts five years ago and reading the sign at the border: Welcome to New Hampshire. Live Free or Die. I almost turned around right then and there to go home.

Several days ago I went on a different trip, upstate to New York to visit my friends Jon Katz and Maria Wulf, and listened to a CD of the country singer Emmylou Harris singing songs about love—happy love, failed love, how you made me once feel, how I feel now, how I wish for love, how I wish this love were over, all the infinite variations we have around love. By contrast, I did EST a long time ago and the facilitator started humming the current rock-‘n-roll songs about love, calling them soap operas.

I thought of the many people who, like me now, live alone and feel the empty air around them every morning when they wake up. I especially thought of those who are even more isolated because they’re afraid of the coronavirus and won’t meet up with anyone.

A woman I know in the next town does a lot of gardening. She has been alone for many years, she tells me when she comes here with her truck.

“Do you ever think about love?” I ask her.

“Not anymore,” she says, putting a hat over her folded-up long hair to protect her thin, dry skin.

You probably won’t ever be a country music singer, I think to myself.

I also reflect about trees, grass, animals, and birds. I’m not a maven here, but my sense is that few species, if any, actually love. They need to survive, so there’s the strong instinct to copulate in some way or other and preserve their genes. But love? Even those that mate for life, like wolves, do they do this out of love?

So why do humans love? We don’t need it to survive, we could be like everybody else and copulate to preserve our kind; lots of people have sex without love at all. So why do we love when it’s not essential to our survival? Even in long-ago cultures where marriages were arranged between families and personal love was unacceptable, stories survive of two people, like Romeo and Juliet, who fight society and the odds in order to be together.

At the beginning of one of our retreats at Auschwitz-Birkenau, we sat on the floor of the Sauna building which inmates came through after Selection, shedding their clothes, personal belongings, hair and identities to emerge shaved and in striped pajama uniforms, slave labor of the Third Reich. They were the lucky ones who didn’t go straight to the gas chambers.

A woman told the story of her father, who had gone through the Sauna and survived his labor and years at Birkenau, even as the rest of his family was murdered. When the Russian army liberated Birkenau, he was so sick he went into the hospital, and over the long time of his recovery he fell in love with the nurse taking care of him, a German woman. She loved him very much.

He received a visa to go to the United States and promised to send for her as soon as he could. But upon arriving here and sharing his story, people immediately tried to dissuade him. Local rabbis especially said: “You have a chance to start a new life with a good Jewish girl, why do you need a German woman, a member of a nation that murdered us, in your life here in America?”

The man listened to them, never sent for his beloved German nurse, met an American Jewish woman, married, and had a family. The nurse had become pregnant with his child. She had the child, a boy, and never married.

After the man’s daughter shared his story with us as we sat in the Birkenau Sauna, surrounded by photos, postcards, letters, and other memorabilia left behind by all those who’d disappeared through the ovens and chimneys of Birkenau, Rabbi Ohad Ezrahi spoke up and said, in paraphrase, the following:

“There is nothing to equal the power of love in human beings. When two people fall in love—it doesn’t matter who they are—it is a sacred gift from God. It is physical and spiritual, it spills over all boundaries and illuminates the world. How does anyone dare to interfere with such a gift? How can anyone belittle it in the name of common sense, logic, or even history? It is the most precious thing we are given, we must never take it for granted, never interfere with its intricate workings.”

A rabbi said this standing in the mass extermination grounds of Birkenau. I never forgot it.

Now, whether I listen to Emmylou Harris or Leonard Cohen, whether I talk to a friend who turns towards her truck as she turns her back on love, whether I think of my husband (gone) or Harry (gone but loves his new family) or Aussie (who wishes I was gone rather than Harry) or the palpable quivering absence I wake up to each morning, I remember Rabbi Ohad’s words.