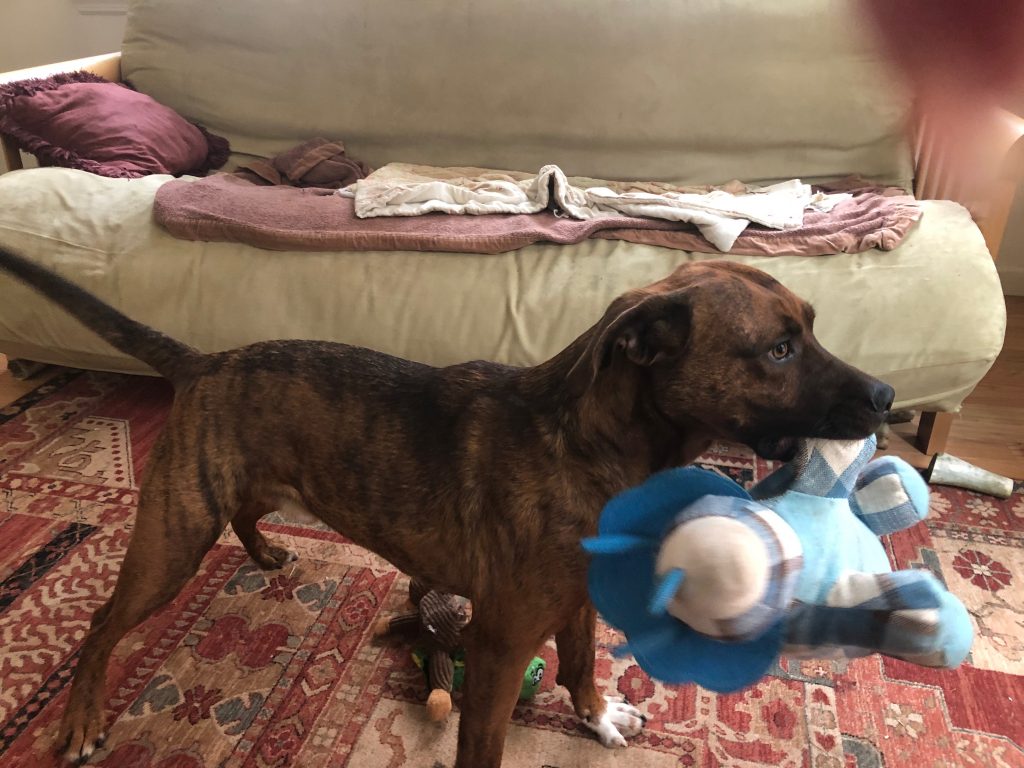 I packed 15 boxes to ship to San Francisco, taped them shut, and UPS agreed to transport them by ground. A friend agreed to take them up from the basement, load them on his truck, and bring them to UPS.

Almost 3 hours later, we were back. We’d gone to two different UPS shipping places, were told the tracking numbers didn’t work, the boxing didn’t work, the distribution centers didn’t work. My poor friend loaded and unloaded the heavy boxes again and again, and finally, racing against rain, we got home and the boxes went into the garage.

Before he left, my friend shook his head and said, “It’s hard to get rid of Bernie, isn’t it?”

So, we will re-tape everything from scratch, re-do the shipments, get the right preprinted labels, tape those on, etc. Call UPS for pick-up from home, cross our fingers, hope for the best, and I know the truth: Bernie will leave when he’s ready. Or rather, when I’m ready.

He was ready to leave when he died. “I’m so much trouble for you,” were his last words to me. But am I ready? There’s the rub. That’s why, while I dislike going through boxes, records and photos, and though I certainly did not like the runaround with UPS in humid heat, thunderstorms threatening, I feel mostly relaxed. I know it’s part of a process not completely up to me, taking as long as it has to take; UPS is but its agent.

Today, I let go of someone else, and that’s my dog, Harry. Harry didn’t die, he simply found (with my help) a beautiful couple to take him home not too far from here.

I’ve raised Harry for a year-and-a-half. I picked him up from a Vermont shelter in January 2019, two months after Bernie died, not the best timing in the world. He was an untrained, very young mountain cur from Mississippi. Harry learned to stop peeing in the house, stop pulling on the leash, stop jumping on people by the front door (well, almost), stop jumping on me when I’m about to feed him, and stop stealing food from Aussie.

When he came here, he was a desperately hungry dog with no manners and no sense of pack or family dynamics, intelligent, soulful eyes that still wore a dazed look I’ve seen in other unsocialized dogs. He learned a lot in a year and a half:

How to ride in a car (he wouldn’t get in one for about a month), screaming in my ear to open the window completely so he could stick his head out.

How to walk on a plank bridge and not be left behind.

How to splash in the water, and

Finally, this summer, he learned to swim laps.

Trouble was, from Aussie he learned how to run away. At home the two of them were terrific, quiet and relaxed. But on walks they became a pack that left me behind, unwilling to obey and come. I trained Aussie separately and had good success, but I couldn’t integrate Harry. Once he joined, the pack was back.

There were two options: Take them on leash on the road for the rest of our lives together, which was going to get harder as I grew older, or let go of one and train the other to walk off-leash with me, as I had done with Aussie.

“Isn’t it better to take them on leash to letting one go?” a friend asked. My answer to him was no, I need to be grounded, not tethered. I need my walks in the woods, which I can’t do holding on to two dogs, I need to meander among the trees deep in thought or else watching the grouse overhead and following owl calls. I need to relax on those walks, not forever focus on dogs, not get anxious if they escape and wonder nervously if this time, they‘ll stay gone, or else get hurt.

I placed an ad in the paper and got literally a dozen calls over some 24 hours, in other words, the pick of the litter. I met a lovely and warm couple, with a house in the country as well, who took to Harry right away. I have every confidence they’ll give him the love and attention he needs. I packed a bag of Harry’s toys, including Indestructible Porky (who remains indestructible), medical records, dog food, and even a marrow bone. I also made it clear that if for any reason Harry wasn’t a good match for them, they could give him back to me immediately, no questions asked.

I’ll miss him, and at the same time, I’m glad. Without Harry, without boxes, without pictures and books and corporate files, I feel lighter on my feet even if I don’t know where I’m going.

I wonder if Aussie will miss him. I gave her a marrow bone when he left, which she considered a fair exchange.

“Are you sending him to San Francisco in one of those boxes?” she asked.

“Of course not. He left with that nice couple.”

“If they give him steak, salmon and hot dogs, I’ll join him. In fact, I think you should leave Harry and me here and find somebody who’ll take you.”