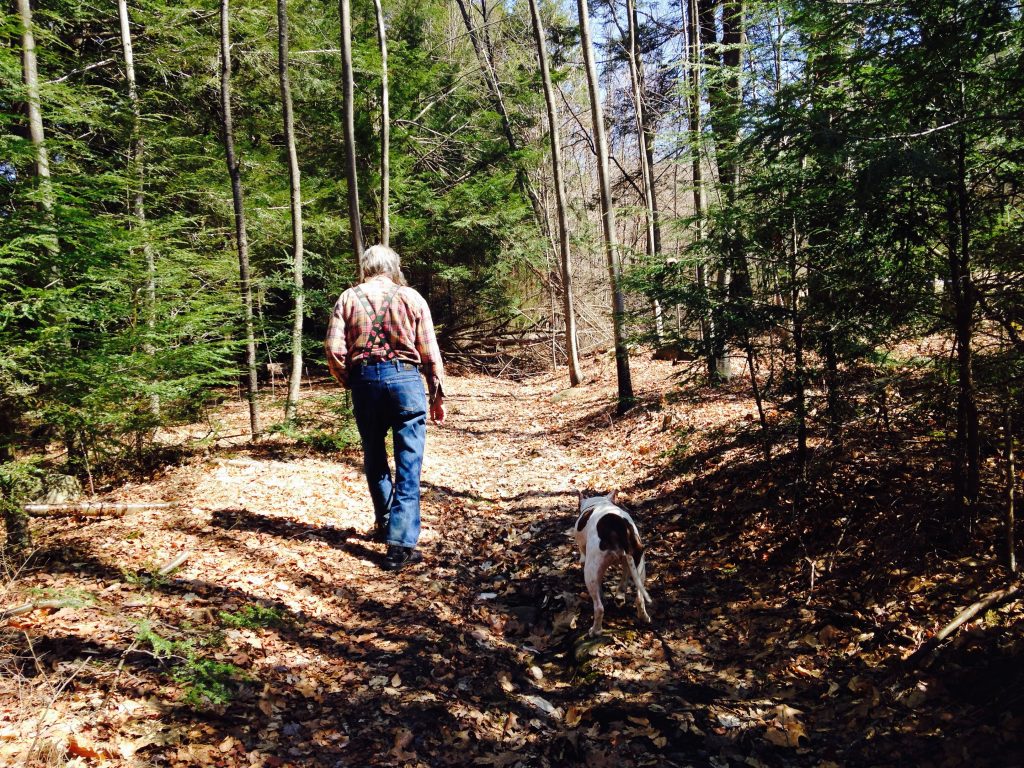 “OK, get ready to make your move!”

Maggie arrives once a month at our house, lugging cleaning implements with her. If she opens the front door by herself it’s no contest, the dogs are out before you could say Boo. But even when I open the door for her, filling the doorway and telling Harry to get back—Don’t even THINK about running off!—I move a couple of inches to make room for Maggie and he darts out between my legs.

It’s a diversion. I move the slightest bit forward—“Harry! Come back!”—and Aussie rushes out on my right, almost upending Maggie in the process. Together the two dogs make a dash up the driveway as fast as their legs can carry them, teeth gleaming, eyes shiny, and I can hear the Hee! Hee! Hee! from the road. From there they’ll scramble even further up the hill and disappear into the forest. No amount of walking and driving around will get them back anytime soon.

“What a dummy, Aussie. We do this every time Maggie arrives. Doesn’t the Boss ever learn?”

“You have to give her a little slack, Harry, she is kind of slow.”

Over and over I order Harry to go back to the living room when there’s someone at the door, and he obeys. But not when Maggie arrives. He’s found his loophole, the one time he could cheat, and off he goes, taking Aussie with him.

Which reminds me of Bernie. Bernie believed in cheating. “You can’t always do things 100%,” he’d say. “You have to cheat.”

A friend told Bernie that if Bernie would refrain from eating meat or fish for an entire year, he would make a major donation to Zen Peacemakers. Bernie agreed, and then added: “But you know, I’m going to cheat.”

“You’re going to cheat?” said the friend. “And you’re telling me that ahead of time?”

Never was a word he didn’t like. So was always. If I would say to him You never do this or you always do that, he’d raise his famous, thick eyebrows: Never? Always? Life didn’t fall into neat categories like never and always, including cheating.

The dogs will come home when they get hungry. Though they run and run after prey, I suspect they don’t catch much. Besides, it’s going to be hot, so when they return, they’ll come in wet, proud, and happy after splashing in the river. No Aussie, come! No remote collar. Just running. Just free.

I look at the lilac bush outside and imagine their conversation:

“What’s that thing the Boss puts on her face when she leaves us in the car and goes into a supermarket, Aussie?”

“I don’t know, Harry. You’d think that if you go into a place with so much food around, the last thing you’d want to do is cover your mouth.”

I get the pooper scooper, an old one from some 25 years ago that has followed me from state to state, cleaning up after generations of dogs, and go look for dog poop. This generation of dogs goes way to the left by the tool shed, they don’t poop right under the freshly washed clothes hanging on our laundry lines like Stanley used to do.

Again, I think of Bernie. Once I accused him of not helping enough with the housework. He looked around him vaguely and said, “I’ll clean up after the dogs.”

He not only cleaned up after them, he dressed for it. To the usual jeans, Hawaiian shirt, suspenders and black sneakers he added a cigar, the cigar clipper, the lighter, the phone in the pocket, and a safari hat against ticks. He’d pick up the scooper by the back door and off he’d go, lighting the cigar, waving the smoke away, looking vaguely up towards the trees.

“Dogs poop on the ground,” I’d tell him.

But he’d be in the midst of some wild imaginings, envisaging a new project, a new building, a new way of looking at things, and he’d stare off into the wild, occasionally stepping into the very poop he was supposed to collect. “Oh, shit!” he’d say.

It would take him over an hour; he made of it art. He made art of fried eggs, the best breakfast I had anywhere. Nothing too hurried, nothing to speed through on your way to other, more important things. Dog poop was his magical kingdom.

“Time to clean up after the dogs,” he’d say to me, and it was off to the races.