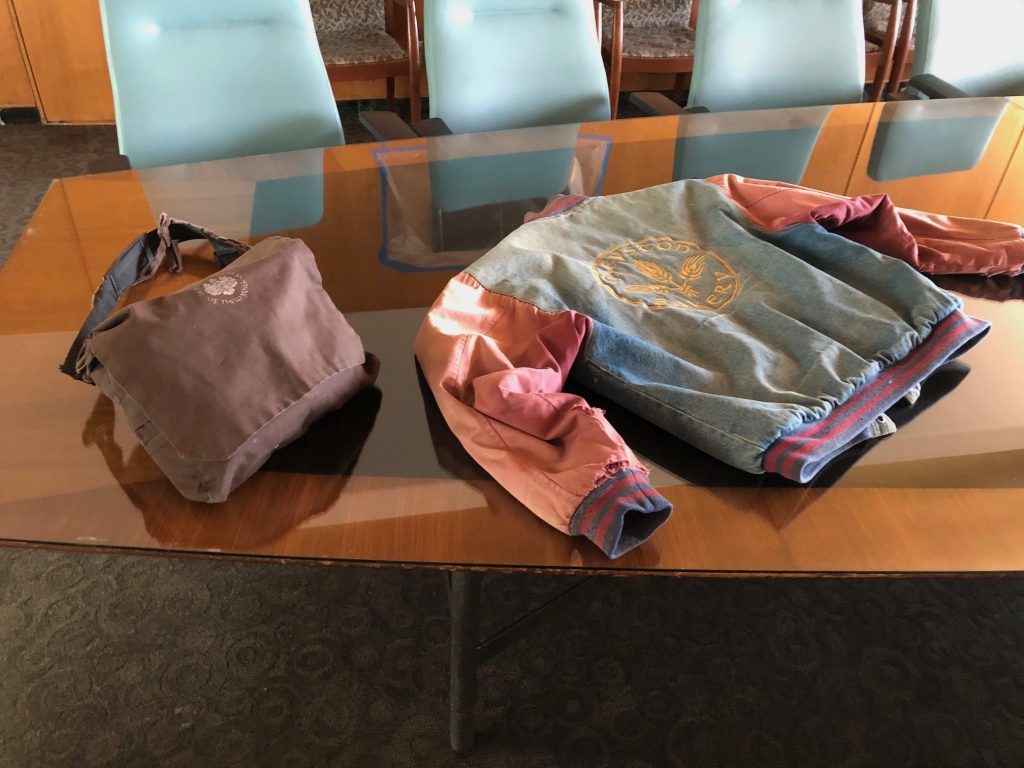 It finally happened: Bernie’s Greyston Bakery denim jacket and the monk’s bag he used for street retreats were formally accepted by the Smithsonian Museum, “on behalf of the people of the United States,” as the thank you letter indicated.

His daughter and family brought the items over. I’d taken them down to her in Thanksgiving, perplexing the airport security people that such tattered items were going into our national museum

It was an official presentation. The staff woman accepted them wearing gloves (I don’t blame her one bit given where Bernie had gone) and folded and put them on a cart, at which point no one from the family could touch them anymore. There were official photos, too.

Bernie loved the denim Greyston Bakery jacket and wore it everywhere. He would have been happy to forego a tuxedo and wear it to his son’s wedding. It tore up in many places, the pink inner lining ripped almost to shreds. His dark brown monk’s bag contained everything you would need to live on the streets, including a small pillow, folded up plastic against the rain, a small umbrella, a rain hat, and a roll of toilet paper.

I saw Bernie not just through illness but also through years of arthritis, when he could barely walk with the dogs and me, and it’s a wonder to remember now that we used to start those street retreats by walking 10 miles from Yonkers through the Bronx and upper Manhattan till we got to Central Park.

A big question came up: What to do with the used, snotty tissues that they found in the pockets of Bernie’s Greyston jacket? Anyone who met Bernie remembers that he sneezed constantly, always reaching in his pocket for the thousand tissues he kept there. If no trash basket was around, he’d put them back in his pockets and empty them later, but sometimes he forgot. These used tissues, believe it or not, may now be catalogued.

Which leaves me musing about what happens now and what happens a moment—or a year—later. When I look at the jacket and the bag, they remind me of Bernie’s free-spiritedness and spontaneity. As years went by, he clowned more, improvising his response to the moment. When he led organizations his love for improvisation bordered on recklessness, but in day to day action and conversation he made people laugh and shake their heads.

“He was the freest man I ever knew,” one friend told me.

The jacket and monk’s bag that remind me of all this will now be catalogued and handled carefully with gloves; they will become artifacts to be shown behind plexiglass. Perhaps it’s human nature to capture and codify the free spirit in all of us, making it into something palpable and solid, something people will read about and could try to copy in the future—but it will never catch the craziness of that response in the immediate moment. I guess museums are designed to do that; it’s when our consciousness does that that it becomes a problem.

Wendell Berry once wrote: “Nobody can discover the world for anybody else. It is only after we have discovered it for ourselves that it becomes a common ground and a common bond, and we cease to be alone.”

Some of us don’t dare risk self-discovery, so we rely on others to discover the world for us. I don’t believe that works.

Around a week ago I wrote of a friend of mine who came to the door asking for help to pay funeral expenses for her daughter, who died suddenly at the age of 51, leaving two children, and all this after a catastrophic fire had gutted their home two years previously. A number of readers asked how they could donate to this, a wonderful surprise for me.

I wasn’t able to contact her till after my return from Chicago. She’s clear she doesn’t want her name to be made public. She’s nervous about going public in this day and age, she said; she’s also abashed at having to ask for money.

The first I can understand, and feel bad about the second. Why are we embarrassed about not having money to cover the costs of such an emergency?

Recently I wrote my nephew to tell him that I can’t come to see him and his family in Nashville, Tennessee because a 2-day visit would cost me at least $700, which  I can’t do right now. He called to say he understood perfectly, and added he was surprised that I felt free to admit this. Most people he knew wouldn’t, instead using euphemisms like: “I’m not set up for that right now,” or “It’s not a good time,” or just “not right now.”

I asked her how people could donate to her and she said that if they would send me the money which I could then give her, she’d be glad. So that’s how it is, generous readers. You could send funds through PayPal to me (using the “Donate” button below) and make sure to add the note: “For friend’s daughter’s burial.” Or else send a check to me, at POB 174, Montague, MA 01351, indicating same on the memo line. $108 has already come in, for which I—and she—are very grateful. If you’d rather not do this, that’s fine too.